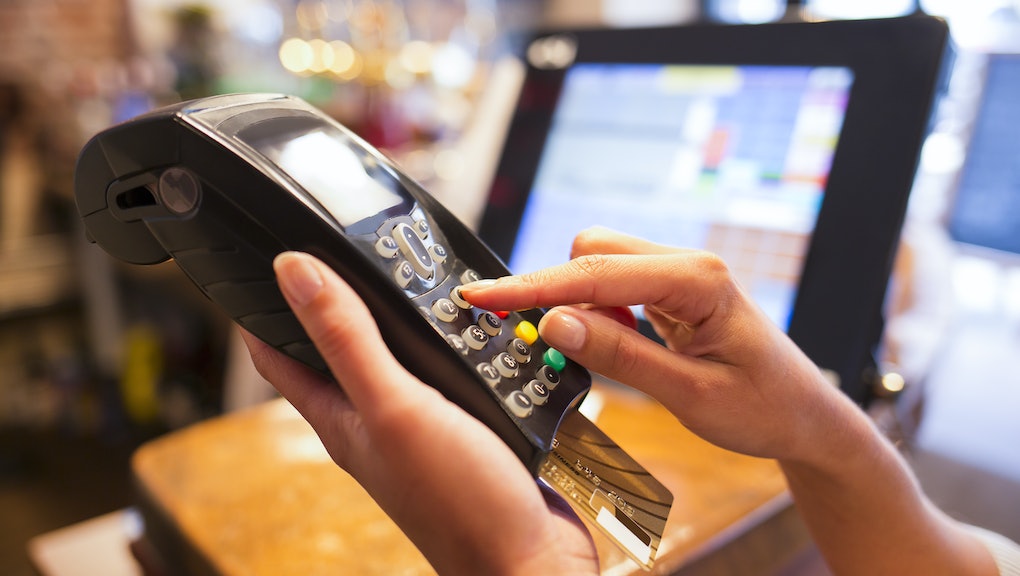 It’s the end of an era. Starting Sunday, “signing on the dotted line” will more or less become a practice of the past — at least as far as credit cards are concerned. That’s because the major card companies, including Discover, Visa, Mastercard and American Express, will eliminate the use of signatures to help verify credit card transactions.

The change has been in the works for some time. Credit card companies began issuing cards with EMV chips in the United States two years ago to replace the magnetic stripes that store customer account information, according to industry blog PYMNTS.com. Since then, these chips have helped reduce the instance of credit card fraud by about 66%.

You may have already noticed the change, ValuePenguin credit card expert Robert Harrow said in an interview, since the chips removed the pressure for merchants to verify that your signature matches what’s on the back of your card. After issuers began rolling out the more sophisticated cards, Harrow said, he started signing receipts with a smiley face to see if anyone noticed. Neither merchants nor his bank ever said anything.

“It’s worth pointing out how little protection the signatures actually provided. How often does the merchant check the signature to make sure it matches?” Harrow said in a phone interview. “These chips are pretty complex, they’re encrypted, they make credit cards much harder to skim through credit card skimmers.”

Yet — as merchants, issuers and consumers adjust to the upcoming change — there may be new problems and even scams you’ll need to watch out for. Here are three rules of thumb to keep handy, especially if you’re planning on swiping any plastic in coming weeks.

1. Beware the next generation of scams, from phishers to “shimmers”

Issuers have had years to review the effectiveness of EMV chip technology and help crack down on fraud. That said, fraudsters can be resourceful. “It’s kind of like an arms race,” Harrow said. “You never want to say that we’re foolproof against fraud because scammers will presumably find ways to make the chips less secure.”

Indeed, there have already been a few instances of scammers attempting to update the so-called “skimming” process in the era of chip cards. Skimming is where thieves attach duplicate credit card readers to ATM machines or other points of sale to scan a card’s magnetic stripe for information that will help the scammer make a fake card.

EMV chips make the process a great deal harder, but not necessarily impossible, according to CreditCards.com. By placing an updated “shimmer” device into an ATM’s card slot, a thief may still be able to access enough card data to scam merchants or bankers that aren’t playing enough attention to their security protocols. You can reduce the risk of falling prey to shimmers by using tap-and-pay software when you can, opting for bank-operated ATMs wherever possible or even visiting a bank teller if you’re nervous about a machine but still need cash.

Of course, while the new chips make swiping your information in person more difficult, hackers could still steal enough personal and financial information online to apply for new credit cards and other debts in your name. And as always, be wary about phishing emails that try to get you to surrender personal information about yourself.

2. Double-check your bill, particularly in restaurants

Harrow said the most immediate consumer effect may be felt by people dining out. Restaurants have a particularly large incentive to save time when it comes to keeping tables clear for new customers, he explained. That’s why restaurants will probably be among the first to try taking advantage of no longer needing to collect diners’ signatures once the bill is paid.

“Automatic gratuity will become a lot more commonplace,” Harrow said. “So there’s a chance of people not worrying about checking their check and overpaying for something. Those are the things to keep an eye out for as this change goes into effect.”

Of course, there’s nothing wrong with demonstrating a little extra generosity, particularly where your servers’ tips are concerned, assuming you’re paying attention and sparing that money intentionally.

But with faster transactions at the end of each meal, consumers may be less likely to check for errors, like being charged for that extra side of guac that never came. As restaurants implement the changes, it may be a good idea to double-check your bill — and any gratuity added — before leaving.

3. Use credit instead of debit, especially with unfamiliar vendors

As always, if you’re ever worried about fraud, be sure to pay with a credit card rather than a debit card for transactions. So long as you pay your balance in full every month, you won’t incur any interest charges (though it’s worth noting that some cards carry other fees).

Credit is safer than debit because the liability protection on credit cards is generally stronger than it is for debit cards. If a scammer gets their hands on the latter — and you fail to report the transaction within 60 days — you may end up being on the hook for every dollar fraudulently charged in your name.

In fact, the people really sweating this weekend’s change aren’t consumers, Harrow said: It’s the merchants. One of the strongest arguments for keeping the signatures around, he said, is because they give merchants a way to prove a customer authorized a purchase.

Merchants dealing with credit card fraud in the form of people contesting charges they actually did make will now have one less form of protection. “To businesses, this is actually a scary move,” Harrow said. “Unfortunately, they can’t really do much about it.”