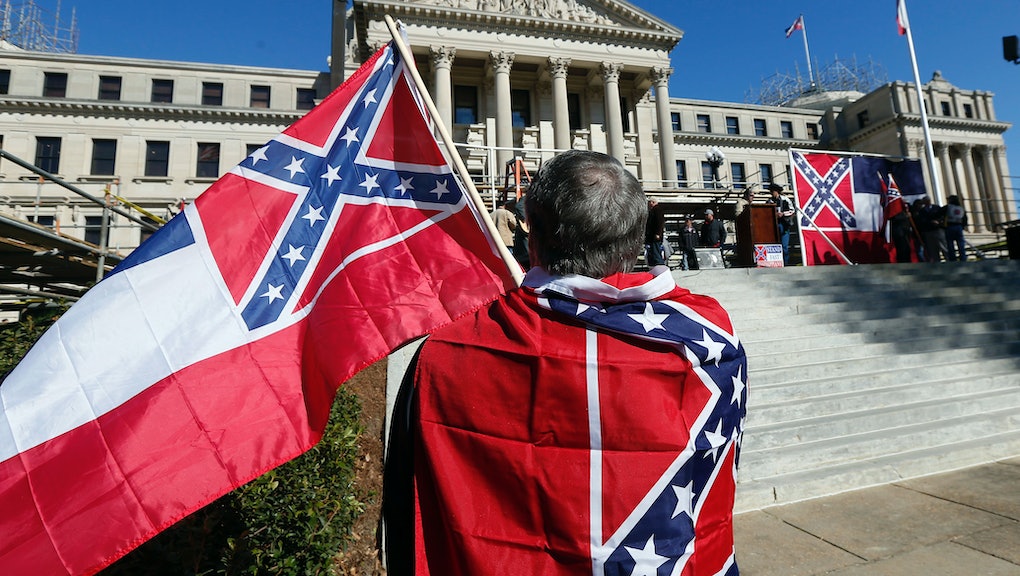 A video featuring self-identified “imperial kludd” Reverend Smith of the Ku Klux Klan group the United Dixie White Knights, in which he spoke in front of a burning cross, made a brief appearance on the web on Wednesday.

“Y’all not going to take down our flag, and we gon’ fight,” he yells in the clip.

The 10-minute-long video, since taken down from YouTube but obtained by Mic, started out as a racist, homophobic and anti-Semitic tirade. Eventually, Smith turns to its number one target: Mississippi Rising, the local coalition of anti-racists who are waging a campaign against the state flag, which still includes the old Confederate battle flag.

On Wednesday, Smith emailed the video to Lea Campbell, the president of the Mississippi Rising Coalition. “The boys are back and we are not backing down,” Smith wrote to Campbell in an email with the video attached. “Call us bigots if you want. But we win in the end.”

Campbell wasn’t surprised — this wasn’t the first time she’d received a video from the Klan, she told Mic in an interview. It was, however, the first time they’d called her out by name. This time, she was angry, and took to Facebook with a message for the KKK.

“You ignorant mf’s can kiss my ass,” Campbell wrote. “You make me laugh. If you think for one second that sending me a video of you in your white hoods and pajamas burning a cross and making threats intimidates me, you obviously have no clue who you’re dealing with.”

Campbell has been singled out by the Klan for her work with Mississippi Rising Coalition, a progressive network of about 400 volunteers founded in April, 2015. The group pushed over two dozen cities and counties to stop flying the state flag. All eight of the state’s public universities followed suit. Recent polling shows future Mississippians could wholly reject the Confederate elements in the state flag. For now, Campbell faces not just intimidation from the Ku Klux Klan, but local and state officials determined to keep the rebel flag flying.

In 2001, Mississippi voted to keep the flag untouched, striking down the suggestion of redesigning the flag to replace the small Confederate battle flag with a blue cross and 20 white stars. It wasn’t until white supremacist Dylann Roof walked into a church in Charleston, South Carolina, in June 2015 and killed nine black congregants that there was an overwhelming grassroots effort across the South to do away with the Confederate battle flag as a symbol of pride.

In the week’s after the Charleston mass shooting, activist Bree Newsome scaled the Statehouse flagpole in Columbia, South Carolina, to remove its Confederate flag. Companies like Walmart and Amazon stopped selling Confederate merchandise. Eventually, this movement grew to include toppling Confederate monuments, and least 25 cities have removed these monuments since.

But in Mississipi, confederate symbology in the state flag is still fiercely defended. After the University of Southern Mississippi removed the state flag from waving on its campus on Oct. 28, 2015, about a half-dozen neo-Confederates with a group called the Delta Flaggers have protested with the state flag at the college campus every Sunday — now for 126 weeks and counting.

On Aug. 12, the night of the Unite the Right rally in Charlottesville, Virginia, members of the South Mississippi chapter of the Democratic Socialists of America decided that they’d take a stand against the flaggers. The next day, they joined another group called the New South Collective, and organized a human blockade to keep the Delta Flaggers off the USM campus, holding a “Black Lives Matter” banner high.

“Charlottesville had happened the day before,” DSA organizer Anna Beth Rowe told Mic. “They’d just killed [Charlottesville counterprotester] Heather Heyer, we thought maybe they’d have the decency to not show up. We were wrong.”

That weekend, the DSA brought about 25 protesters to match the 10 or so flaggers present. The next weekend, the flaggers showed up with almost 100 neo-Confederates, but by then, the DSA were joined by close to 250 allies, according to Rowe.

After several confrontations with the Delta Flaggers, police began separating the two groups, setting up a specific area for the Flaggers to protest, away from the area where they’d previously demonstrated on campus. Rowe considers this to be a small victory for the Southern Mississippi DSA, which plans on ramping up its anti-Confederate protests again in the summer.

Meanwhile, a battle has grown on Campbell’s home turf. She said that for 12 years, the city of Ocean Springs, Mississippi — a seaside town that leans more liberal than most of the state — didn’t fly the state flag. When new mayor Shea Dobson was elected in 2017, he raised the Mississippi flag over City Hall. Three months of protests led Dobson to give an executive order to lower the flag.

Almost immediately, the municipal board voted to fly the flag at every city building with a flag pole. The city election commissioner resigned on the spot.

“See if you can run the city without volunteers,” the resigning commissioner told the board members. “I’ll be talking to others. The vote is beyond deplorable.”

Campbell sent her latest round of KKK threats to the mayor’s office and other local law enforcement officials. None of them responded to her directly. Dobson later condemned the KKK in a statement, calling them “racist, coward terrorists.” Campbell is now cooperating with the FBI, who have gotten in touch multiple times since Wednesday.

In September, for the first time in Mississippi history, a polling firm found that more state residents supported changing the state flag than keeping it the same, including “a slight majority” of whites under 55. Campbell says this gives her hope that with continued grassroots pressure, Mississippi could fly a flag free of Confederate iconography.

Meanwhile, In the state legislature, Democrats and the Mississippi Legislative Black Caucus continue to insist on the adoption of a new flag. State legislator Jeramey Anderson, a black Democrat nominated for U.S. Congress in 2018, helped form a new, bipartisan caucus with its sights firmly set on resolving flag debate.

“There is no longer room for racism, hate speech and targeted threats in our country and especially my state of Mississippi,” Anderson wrote in a statement to Mic about the threats by the KKK. “It is time our people decide if they want to allow the ghost of our past to continue to keep Mississippi from a better tomorrow.”

The Delta Flaggers and their allies started their own grassroots effort in September, called Initiative 62. The law would, with a popular vote, mandate the flag be flown at every state-supported institution in Mississippi. It’d be just like the Ocean Springs solution, only more pervasive, and written into the state constitution.

“This is their second attempt at that,” Campbell told Mic. “They attempted that once in 2015, and I believe they’ll fail again.”

Brent Waller, the “imperial wizard” of the United Dixie White Knights, sent a statement Wednesday to local TV station WLOX that the video sent to Campbell was just the beginning. He also said that the Klan would distribute fliers across the state to “awaken the white sheep” to the actions of politicians like Republican state legislator Philip Gunn, another lawmaker who has advocated a bipartisan effort to remove Confederate imagery from the flag.

Smith, the Klansman with the UDWK who sent the video to Campbell, said in the video that the threats weren’t meant to be physical, but that the Klan will attempt to fight Campbell and Mississippi Rising “in the courts.” However, Smith invoked the 19th-century history of the KKK, a time when the Klan’s primary role was to perpetuate the legacy of slavery through racial terrorism.

“We all know they’re scared of the Klan,” Smith said in the video. “We’ve been around since 1865. We know when to get quiet, and we know when to do what we’ve got to do. Right now it’s time to rise.”