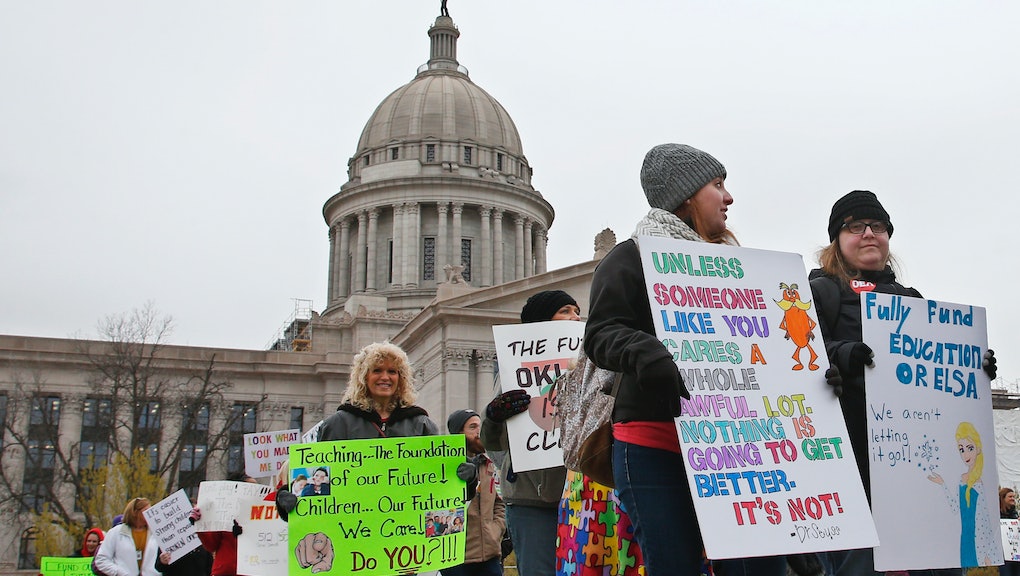 West Virginia teachers attracted nationwide attention in February and March when their nine-day statewide strike led to a 5% pay increase for all state workers — and educators in other states are now following in their footsteps.

The West Virginia strike was the first in what’s become a streak of teacher-led action. Educators in Jersey City, New Jersey have led their own walkouts, and teachers in San Diego, California, threatened a mid-April strike. Nowhere has the trend gained more momentum, however, than in some of the country’s reddest states.

Inspired by the West Virginia teachers, educators in Oklahoma, Kentucky and Arizona are mobilizing statewide and beginning to take sustained action. Oklahoma teachers began what could become a multiday walkout Monday, while several Kentucky school districts shut down as teachers headed to the state capitol to rally for their jobs and students.

“The activities in West Virginia really inspired a lot of teachers to believe again that they can change the system, that their voice could be listened to in a real way,” Joe Thomas, president of the Arizona Education Association, told the Wall Street Journal.

It’s no coincidence that this organized action is taking place in Republican-dominated states. This is where lawmakers who have long pushed tax cuts are now being forced to reckon with the effect tax breaks have on their educators and students.

Oklahoma and Arizona require supermajorities in the state legislature to raise revenue — Kentucky requires a supermajority only in off-budget years — which make tax-increase approvals more difficult. In Arizona, lawmakers have reduced taxes over the past several decades, including a 10% cut on personal income tax in 2006 and a reduction of the corporate tax rate by 30% in 2011.

The oil and gas industry enjoys a particularly low tax rate in Oklahoma, where lawmakers recently approved a 3 percentage point increase on the gross production tax for oil and gas wells. That tax is now 5% — as compared with 8% in Texas and 13% in South Dakota and Louisiana. The GPT change was part of a broader tax increase to fund teachers’ pay raises. Though teachers say the legislation doesn’t go far enough, the bill marked Oklahoma’s first major tax increase in more than 25 years.

Teachers and school districts have felt the effects of their states’ tax cuts. According to the National Education Law Center, Arizona ranked 48th in school funding as of 2015, while Oklahoma ranked 45th and Kentucky 34th. Approximately one-fifth of Oklahoma schools have adopted a four-day week to cut costs, according to Tulsa World.

Oklahoma teachers are also among the lowest paid in the country — those working at the state’s gas stations often have a higher income, CNBC reported. In Arizona, over 60% of teaching positions are either vacant or filled by those who don’t meet standard teacher requirements.

Red states specifically lack strong collective-bargaining laws, which require school districts to negotiate with teachers unions. While these laws don’t necessarily lead to higher teacher salaries, an analysis in the Washington Post concluded they do result in higher penalties for teachers who choose to strike, making it easier for red state teachers to organize.

As a result, teachers in these red states are taking a page from West Virginia’s playbook and demanding change.

Arizona has also followed West Virginia’s red-shirted example through the grassroots #RedforEd movement, in which teachers have worn red to show their solidarity and demand change. On March 7, teachers across the state wore red to school to show their support for organized action.

Teachers in Oklahoma rallied Monday in what some state officials believe could be the largest demonstration ever at the Oklahoma Capitol. Nearly 30,000 are expected to attend the rally, and the organized action has shut down approximately 200 school districts across the state.

Though the state’s recently passed legislation gave teachers a $6,000 pay raise — which is less than the $10,000 teachers were demanding — the bill did not increase school funding. Teachers are asking for a $200 million increase in public school funding as part of their demands.

“This isn’t just about teacher salaries,” David DuVall, executive director of the Oklahoma Education Association, told CNN. “This is about funding our schools for our students.”

Monday’s day of action is expected to be the first day of a multiday strike, with some schools cited by News OK projecting that they expect to be closed at least through the end of the week. Many are vowing to stay on strike until state legislators increase school funding, although News OK noted that lawmakers have signaled that they have done all they can for the year.

Thousands of Kentucky teachers rallied in Frankfort on Monday, after a Friday “sick-out” that shut down schools in over 20 counties. School districts in all 120 Kentucky counties were closed Monday, although the vast majority were already scheduled to be closed for spring break, the Courier Journal noted.

The Kentucky unrest is in response to a pension reform bill that quickly passed through the state legislature Thursday. The bill contains measures that will hurt Kentucky teachers, including moving future teachers from a traditional pension plan to a “hybrid” plan that will decrease their lifetime earnings. It will also limit the impact of sick-leave payments on retirement benefits and cut a death benefit to workers hired after 2014.

Kentucky lawmakers are also set to vote on the state’s budget Monday, which could bring significant cuts to Kentucky schools. The Fayette County school district alone could lose $18.4 million — the equivalent of 304 teachers — the Lexington Herald Leader reported. The Kentucky PTA has a list of its own budget demands, which include increased per-pupil funding and funding for school-based resource centers, the Courier Journal noted.

Teachers in Arizona have not yet kicked off an official walkout, but educators have spent March mobilizing across the state. According to AZ Central, in addition to the March 7 #RedforEd silent demonstration, several protests have taken place thus far; a March 26 rally in the Chandler Unified School District; and two demonstrations at the state capitol. On March 21, nine schools were closed when hundreds of teachers in the Pendergast school district didn’t show up to school in protest.

Arizona teachers are asking for a 20% pay raise, along with restoring education funding to its 2008 levels — an increase that would cost the state approximately $1 billion. Teachers are also asking that the state not implement any additional tax cuts until Arizona’s per-pupil funding reaches the national average.

Legislators in Arizona are currently negotiating a budget proposal that includes more modest education spending, including a 2% raise for teachers as part of $400 million in total education funding.

Organizers cited by AZ Central say that the teachers’ next steps will depend on how lawmakers react to their demands. Hundreds of walk-ins that do not disrupt school operations are planned, and, though momentum for a statewide walkout is building, it is unclear whether one will take place.