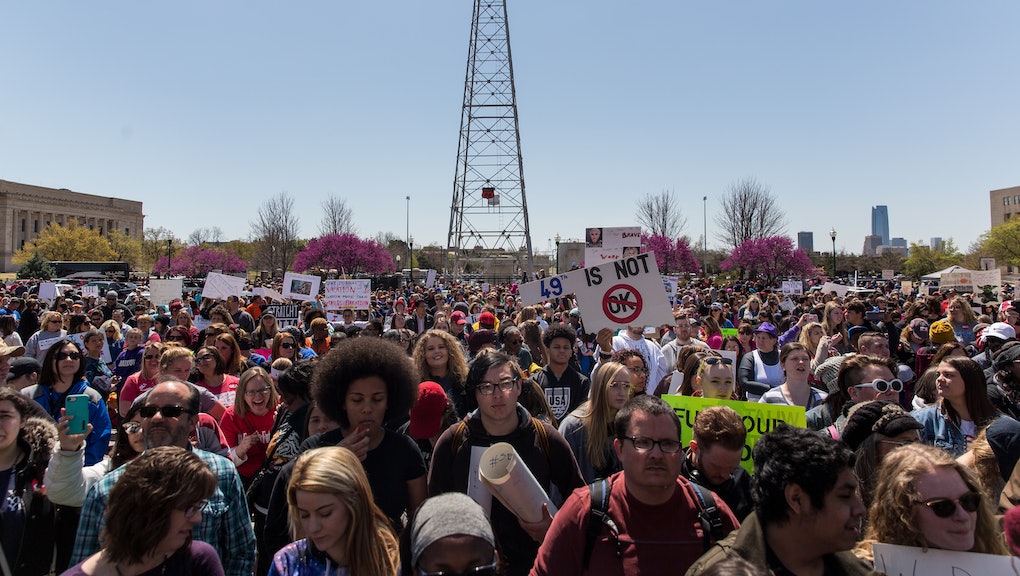 This week, thousands of teachers from across Oklahoma left their classrooms and marched into the capitol building to demand higher wages and better working conditions in a massive strike that is expected to continue into next week.

At the same time, workers in Kentucky have also gone on a statewide strike to fight for higher wages and better funding.

Teachers in both states could look for inspiration and motivation to the successful strike that took place in the state of West Virginia one month earlier. Teachers there defied both the state and their union leaders in order to participate in the largest workers’ strike in that state’s history — and won.

The tactic, known as a wildcat strike, is typically understood as a major strike action where workers collectively walk off the job without authorization from union leadership.

Together, the strikes represent a return of radical labor tactics from a different era. And the timing of the wildcat strike’s return is no accident.

For the past decade, Republican lawmakers have been waging a two-pronged assault on public sector workers.

Since the Republican wave election in 2010, GOP governors have dramatically reduced investment in the public sector while also rolling back protections for unionized workers in the states they control. And often this strategy has been built around a messaging campaign that vilified public sector unions with a heavy focus on public school teachers.

In 2011, as then-New Jersey Governor Chris Christie worked to dramatically cut public sector pensions, he maligned teachers unions, calling them “the single most destructive force in public education in America,” and saying they deserved a “political punch in the face.”

That same year, Ohio Governor John Kasich pushed through his own legislation to dramatically roll back the rights of public sector unions. He too tried to make teachers unions the villain, saying that if he were the “king of America” he would “abolish teachers lounges,” playing on stereotypes of public school teachers sitting around and complaining about their jobs. Kasich’s anti-union law was eventually overturned via a voter referendum.

Over the next decade, Republican governors in states with strong union histories like Michigan and Wisconsin began rolling back the rights of union workers.

The targeted battle against teachers was on full display in the state of Oklahoma. Elected in 2010, Governor Mary Fallin led Oklahoma in making the deepest cuts to education of any state in the union for the period after the financial crisis.

Yet Oklahoma’s Republican state officials are now coming face to face with the unintended consequences of their attacks on teachers and unions. Instead of destroying the resolve of Oklahoma teachers, the actions taken by state officials appear to have emboldened teachers to fight back by reverting to one of the labor movement’s more militant tactics.

The same is true in Kentucky, where the state’s Republican governor, Matt Bevin, signed a law in 2017 ending union’s ability to collect dues from every worker it represents.

What really happens when you try to weaken unions

For decades the Republican party has largely opposed unions as a wrench in the gears of the free flow of labor in a global capitalist system. But, while the GOP has turned unions into an anti-capitalist boogieman, the truth is that the power of modern-day unions was actually born out of a series of compromises in the early and mid-twentieth century that were intended to prevent the kind of mass strikes currently taking place across the country.

After the Great Depression, the labor movement around the country was growing in fierceness and intensity. In 1934, 1.5 million workers went on strike across the country, resulting in many violent clashes between workers and police.

In 1935, Congress and President Franklin Delano Roosevelt sought to broker a compromise between management and labor with the passage of the Wagner Act, which codified into law the rights of workers to collectively bargain for better working conditions and pay. The act also established the creation of the National Labor Relations Board, which created a legal entity that could arbitrate labor disputes.

“There was a fear that the upsurge in strikes and organizing would lead to some sort of communist social unrest,” said Dorian Warren, a labor historian and president of the Center for Community Change Action. “If you just read the preamble to the Wagner Act, it tells you all you need to know. The idea was to create ‘labor peace.’”

While often regarded as a landmark piece of pro-labor legislation, the Wagner Act’s effect was to deprioritize the need for radical labor tactics like wildcat strikes by formalizing the mechanisms for resolving labor disputes.

In the years since the Wagner Act was passed, however, there has been a decades-long attenuation of those once-codified workers rights. The rollback began in 1947 with the Taft-Hartley Act, which allowed states to effectively opt out of key parts of the Wagner Act. It was this law that would pave the way for states across the years to start opting out of the legal regime that protects the role of unions in workplaces and would eventually pave the way for the post-2010 wave of state-level anti-union laws.

Today, public sector unions are also battling for their survival in the courts as public workers await the decision in a major Supreme Court case, Janus v. American Federation of State, County and Municipal Employees. The case could determine whether or not public sector unions across the country can continue to compel the workers they represent to pay certain fees that are key to their influence and survival.

No longer playing the heel

It’s not just the decades of legislative attacks on teachers unions that have led to the return of the wildcat strike. As Warren points out, the political demonization of teachers in public comments made by elected officials across the country has also played a big role.

“Teachers historically have had strong occupational identities. That’s not the case with say, fast food workers, or lots of workers in other professions,” Warren said. “If you’re being attacked constantly over a decade, that’s going to strengthen your identity as a worker. When they’re attacking teachers, it means teachers are going to be primed to take this kind of action.”

The years of political attacks against public teachers unions came to a head with the appointment of Betsy DeVos — a woman famous for her disdain for public school teachers —  as the secretary of Education under President Donald Trump.

But Warren also notes that, while Republicans have led the charge against unions in general, some Democratic lawmakers have played a big role in the fight against teachers unions specifically.

“I would actually argue that this really began with the Chicago teachers union strike a couple of years ago,” Warren said referring to the battle between Chicago teachers unions and Mayor Rahm Emanuel in 2012. “We’ve all forgotten about it, but I think it was really important nationally because they took on a Democratic mayor and won.”

The Chicago teachers strike effectively created the playbook for today’s wildcat strikes and showed teachers across the country what success looks like. By winning major concessions from a popular Democratic mayor who had only recently left the Obama administration, Chicago teachers were able to demonstrate the depths of anti-public teacher sentiment among the political class and prove that no politician is too powerful to take on.

With strikes continuing in Oklahoma and Kentucky, some are speculating that the strikes could expand to even more states in the coming months. As members of both parties grapple with the fallout from their attacks on teachers unions, the question is, will those unions continue to be seen as the enemy, or will politicians recognize the vital role that they play in keeping the peace between some of our most vital public workers and the state that employs them? And if attacks on teachers unions continue, will the new era of radical labor tactics continue with it?