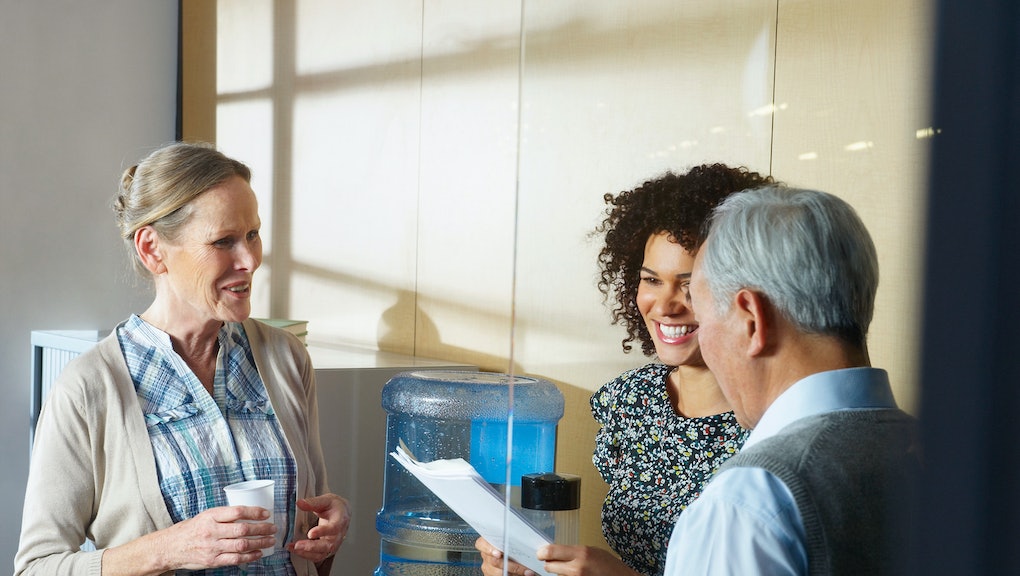 Is there actually a wage gap? Yes, and here are some ways men can help fix it.

Women who worked in 2017 have to work until approximately April 10, 2018, to make as much money as their male peers, based on Census data that shows women still earn roughly 80 cents on the dollar relative to men. To note the occasion, women’s advocacy organizations have dubbed April 10 Equal Pay Day.

There’s unlikely a single cause for the wage gap, Linda Babcock, an economics professor at Carnegie Mellon and director of the Program for Research and Outreach on Gender Equity in Society, said in a phone interview. The reasons for the wage gap can include the actual hiring process, which companies get investment money and issues outside the office, like the breakdown of domestic work.

Women have to work harder to make what men make still exists. To take the onus off women, how can men, in particular, contribute to closing the wage gap? Here are seven ideas.

One of the simplest ways men can help close the wage gap is to stop calling it a myth, which drives what some studies suggest is a lack of awareness among men about the prevalence of hostile workplaces. Pew, for example, found that men in STEM professions are less likely to consider sexual harassment a problem in the workplace. A recent study of workers in highly paid STEM jobs found that only 28% of men said that sexual harassment was a problem in the workplace, compared with 36% of women. Nearly 80% of women tech founders said they have either experienced sexual harassment on the job or know someone who has.

So why do so many people still claim that the gender gap is a myth? Babcock described an enduring attachment to the idea of American meritocracy.

“People don’t believe what they don’t want to believe,” Babcock said. “We’re taught to believe that the U.S. is a meritocracy and it’s hard for us to maintain these two beliefs, that we live in a society that’s fundamentally fair but also one in which women are making less than men for similar work. The dissonance there is strong.”

2. Do the office dishes

In addition to acknowledging the existence of wage inequality, men should also be stepping up to re-shape their workforces. Specifically, Babcock pointed to some of her own research suggesting that women “volunteer, are asked to volunteer and accept requests to volunteer,” for tasks with “low promotability” more than men.

Babcock said this could amount to an extra five to six hours a week spent on tasks like mentoring new hires, joining office committees, taking notes in meetings and doing the office dishes. These impact earnings by taking women away from tasks more closely linked to their productivity and which are rewarded in performance reviews.

“Men should be stepping up to the plate for these organizational tasks,” she said. “These tasks are often important organizationally, but they’re not considered in performance reviews. ... But if you’re spending five to six hours a week on them relative to men, that’s a significant amount of time.”

3. Be better in meetings

In addition to volunteering to take notes, there’s good evidence to suggest that men should make an effort to talk and interrupt less in meetings. That’s according to one interesting study looking at the talking patterns of U.S. senators from researchers at Yale. That study suggested that men tend to demonstrate greater “volubility” as they acquire more power while women do not.

The reason? Women with authority rightly perceive that they’re more likely to receive backlash when they speak up than men, the Yale study also found. That suggests that men in particular should be focusing on their active listening skills and giving credit for other people’s ideas, particularly as they climb the career ladder.

4. Shame the all-male panel that’s asked you to speak

Speaking of the unforeseen consequences of male volubility, men looking to contribute to closing the wage gap should stop agreeing to speak at infamous “manels,” all- or close-to-all-male panels at prestigious conferences and events.

A recent study of nearly 13,000 speaking roles at conferences in the European Union found that even at the most powerful conferences, like the World Economic Forum at Davos, Switzerland, male speakers outnumber women by a ratio of four to one.

Another workplace initiative men should be advocating for, Babcock said, is gender-blind hiring, which has been found to increase the number of women who receive job offers in competitive roles.

That’s according to one particularly famous 2000 study in the American Economic Review of audition data at the country’s top orchestras. Those authors found that when violinists auditioned behind a screen and were considered solely on their merits, women were more likely to be accepted into the orchestra.

The evidence that the wage gap seems to widen with age, with marriage and for people with young children, has led some to believe that motherhood and men’s failure to share equally in domestic tasks is one of the main drivers of the wage gap. These gaps exist even when economists control for the number of hours worked overall.

Men conversely are not disadvantaged economically from being parents. One Cornell study used randomized resumes with a line about being a member of the local parent teacher association to test this idea out. Women’s resumes that mentioned parenthood were about half as likely to get a callback as those that didn’t, while men experienced no parenthood penalty at all.

These effects are more pronounced for lower-income working mothers, who tend to experience an extra two percentage points in lost wages per child than the national average, according to the New York Times. Regardless of whether you plan on becoming a parent any time soon, it’s important to speak up for more generous parental leave and childcare benefits — which some evidence suggests are among the most effective policy solutions — and avoid claiming benefits you don’t actually need.

7. Report discrimination when you see it

A common rebuttal to explanations for the wage gap is to point out that women tend to major in lower-paying fields when they’re in college, which leads them to go on to work in lower-paying fields. High-profile men in academia like former Harvard President Lawrence Summers and Steven Pinker have even suggested that this gap is perhaps because men demonstrate more aptitude in these higher-paying fields.

More recent research suggests that this isn’t the case, and that women are more likely to select lower-paying majors not because they’re “more interested in people” than things or prize “status and family equally,” as some intellectuals have claimed. One recent paper actually found that perceived discrimination in different fields — for example, the perception of tech’s male-heavy “brogrammer” culture — weighs more heavily on major selection than any other factor, including salary.

Rather than condescendingly urging women to fix the wage gap themselves by majoring in the right things or asking for the right number of raises, men should instead focus on ridding their workplaces of discrimination, since that’s likely playing the bigger role in women’s choice of field, and the amount of money they make.

If you see something discriminatory happen to a colleague, report it instead of leaving the burden on them. Also bear in mind that other activities that do not necessarily meet the definition of discrimination may still be marginalizing, for example hiring too much for “culture fit” or citing the non-existent “pipeline problem” as an explanation for a homogeneous workforce.

None of these ideas are silver bullets. While there’s little disagreement among economists that the wage gap exists, there is less consensus about where it comes from and the best ways to fight it.

Everything from parental leave to the way we write our job descriptions likely plays a small role in allowing workplace inequality to endure. But by being more aware of subtler causes, everyone can do a little more in the name of closing up the wage gap — so Equal Pay Day can be celebrated on December 31.