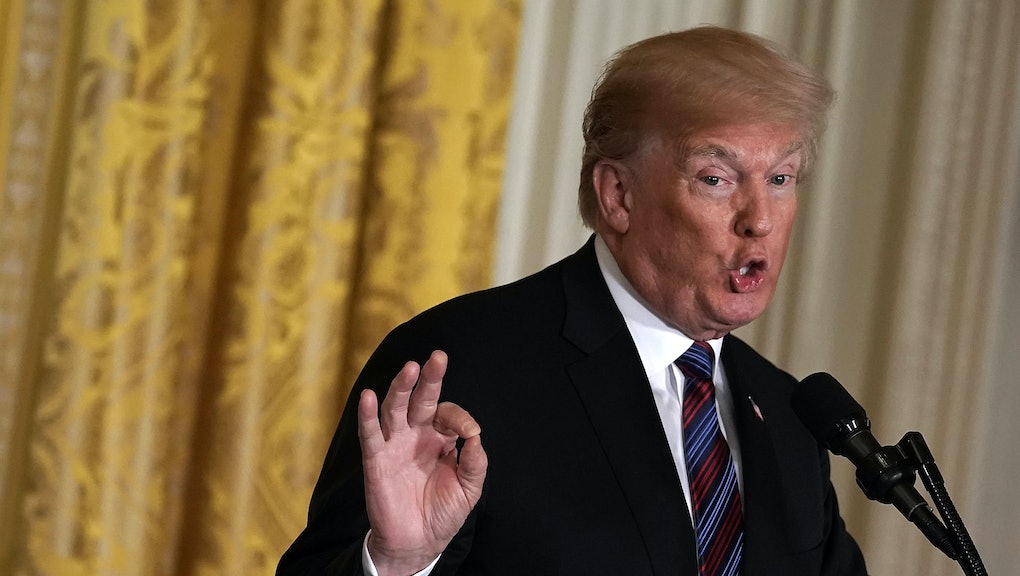 Is Trump sending troops to the border because of a report he saw on Fox News? Signs point to yes.

White House officials on Wednesday refused to say whether President Donald Trump is sending National Guard troops to the U.S.-Mexico border because of a story he saw on Fox News about a caravan of migrants headed toward the U.S., despite multiple questions from reporters about the decision.

During a press conference at the White House today, both White House press secretary Sarah Huckabee Sanders and Homeland Security Secretary Kirstjen Nielsen equivocated when asked a yes or no question by reporters about whether the National Guard mobilization was a result of Trump watching the conservative news channel.

However, Attorney General Jeff Sessions gave away the store in a Wednesday statement, in which he tied the Fox News’ migrant caravan story to the troop decision.

“Earlier this week, media outlets reported that a so-called ‘migrant caravan’ was making its way through Mexico with the intent of illegally crossing the southern border of the United States,” Sessions said in a statement, which went on to say that Sessions, “fully supports the efforts of the Departments of Defense and Homeland Security announced today to secure our border.”

Fox began reporting on the migrant caravan on Sunday, leading to an angry Trump Twitter outburst soon after in which he said the border is “getting more dangerous” and that there will be “NO MORE DACA DEAL!”

And Trump has continued to tweet about the caravans, saying that tougher immigration laws are needed and that the wall must be built, but that he will take matters into his own hands until Congress acts.

On Tuesday, Trump caught his staff off guard by saying he would be sending troops to the border.

“Until we can have a wall and proper security, we are going to be guarding our border with the military,” Trump said on Tuesday after lunching with leaders of the Baltic states. “That’s a big step. We really haven’t done that before — certainly not very much before.”

The White House later clarified that Trump would be asking governors to send National Guard troops to the border. The National Guard troops, however, cannot act as a police force thanks to the Posse Comitatus Act, which bans military troops from making arrests or using force.

She also refused to say whether the decision was made thanks to Trump watching the Fox News story on the caravan of migrants.