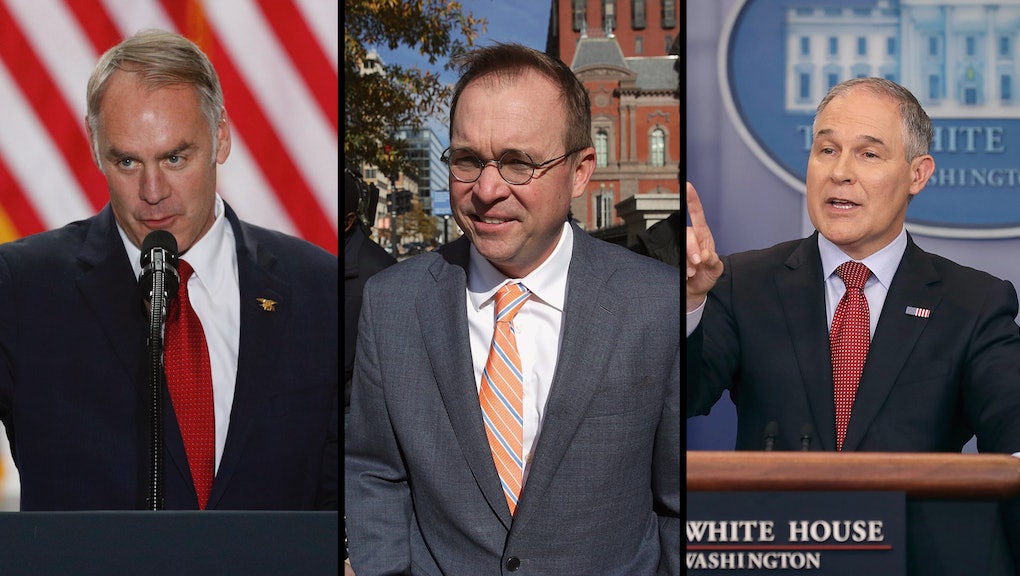 While you weren’t looking: 5 stories from Trump’s Cabinet that aren’t about trade wars or caravans

This week’s news was dominated by coverage of the President of the United States’ erratic and exaggerated claims about immigrants crossing America’s southern border, and China’s decision to retaliate against Donald Trump’s controversial tariff policies.

But while the media focused on crises that the president either imagined or created himself, the rest of the administration was hard at work making policy and navigating scandals that would have been headline news in any other era.

Here are five important stories from the past week you may have missed.

The past week has been a rare time in the spotlight for Environmental Protection Agency head Scott Pruitt. After the discovery that he had been renting the home of an energy lobbyist for $50 per night, and had gone against the wishes of the administration in giving two of his top aides large pay raises, mainstream media outlets finally decided to give the ethics problems in his EPA some attention.

Despite all of that, one of the most significant actions taken by Pruitt’s EPA managed to go largely unnoticed this week.

On Tuesday, Pruitt announced that, as part of Trump’s deregulatory agenda, he would be rolling back fuel efficiency standards put in place by the Obama administration.

The Obama-era rules required automakers to double the fuel efficiency of cars made between 2022 and 2025. The EPA says it will replace that rule with a new one created in partnership with the National Highway Traffic Safety Administration.

In a major blow to “states’ rights” the EPA is also considering re-examining a waiver that allows the state of California to set its own stricter fuel efficiency standards.

The attorneys general of both California and New York have already threatened legal action over the move.

In the past week, Interior Secretary Ryan Zinke has taken multiple steps to ensure that endangered species in America are further endangered.

On Wednesday, Zinke tapped former Texas state official Susan Combs to be the acting secretary for fish, wildlife and parks in his agency. Combs has been an outspoken critic of the Endangered Species Act, which created the list of protected endangered species in America.

In a 2013 appearance before the Texas state legislature, compared protected creatures on the list to “incoming Scud missiles.”

And Combs’ outlook may already have its backers in Interior. On Thursday CNN reported that the Department of Fish and Wildlife services is considering scrapping a rule that protects 300 threatened species of animals and plants. Among the creatures that would be made vulnerable by the change are the northern spotted owl and the manatee.

A spokesman for the department told CNN that characterizations about the proposed rule change were “inaccurate” but declined to say in what way.

Mick Mulvaney wants Congress to put him on a shorter leash

The head of the government’s top consumer watchdog is asking Congress to give him less latitude to do his job.

On Monday, acting head of the Consumer Financial Protection Bureau Mick Mulvaney asked Congress to take four major steps to significantly limit the power of the agency he oversees.

His proposal included giving Congress control of the CFPB’s budget (currently overseen by the Federal Reserve), allowing the president to fire the head of the bureau (Mulvaney’s current role) at will, appointing an independent inspector general for the bureau and giving Congress the sole authority to approve any of the bureau’s rules.

The independence of the CFPB has been a hotly contested issue since the agency was created under the Dodd-Frank Act. At the time, lawmakers took a number of steps to insulate the CFPB from the kinds of political gamesmanship that has befallen other regulatory agencies.

While in Congress, Mulvaney was a staunch critic of the CFPB, arguing that the consumer protection bureau was a “sick, sad joke.”

Mulvaney has been criticized for his ties to the financial institutions he is supposed to police.

On March 30, the Wall Street Journal broke the news that the Justice Department has begun a new performance evaluation system for immigration judges in an effort to speed up deportation proceedings across the country.

In a memo sent by the Justice Department, immigration judges were informed that they would be asked to comply with a new quota system that will measure how quickly they process cases. The move is an apparent effort to push through immigration courts’ lengthy backlogs of cases.

But Greg Chen, director of government affairs for the American Immigration Lawyers Association, told the Journal that the move could forces judges to make decisions based on their evaluations instead of based on the law.

Judges also argued that the new process could actually have the opposite of its intended effect by encouraging defendants to appeal their decisions based on the fact that the judges in their cases rushed their proceedings in an effort to meet the new quotas.

A political appointee at the Department of Defense has resigned after CNN discovered several social media posts referencing conspiracies about former President Barack Obama’s birth place and insinuations that Obama is the Antichrist.

Todd Johnson, who was an advance officer, appears to have had a habit of posting inflammatory and conspiratorial political videos and articles to his Facebook page during the Obama administration.

In another post from around that time, Johnson agreed with a friend commenting on his page that Obama was “a Muslim.” Johnson also posted a seven-minute-long video arguing that Obama was the Antichrist with the caption “I post, you decide.”

It should be noted that around the same time, another member of the Trump administration was also pushing discredited birther conspiracies about Obama — Donald Trump.