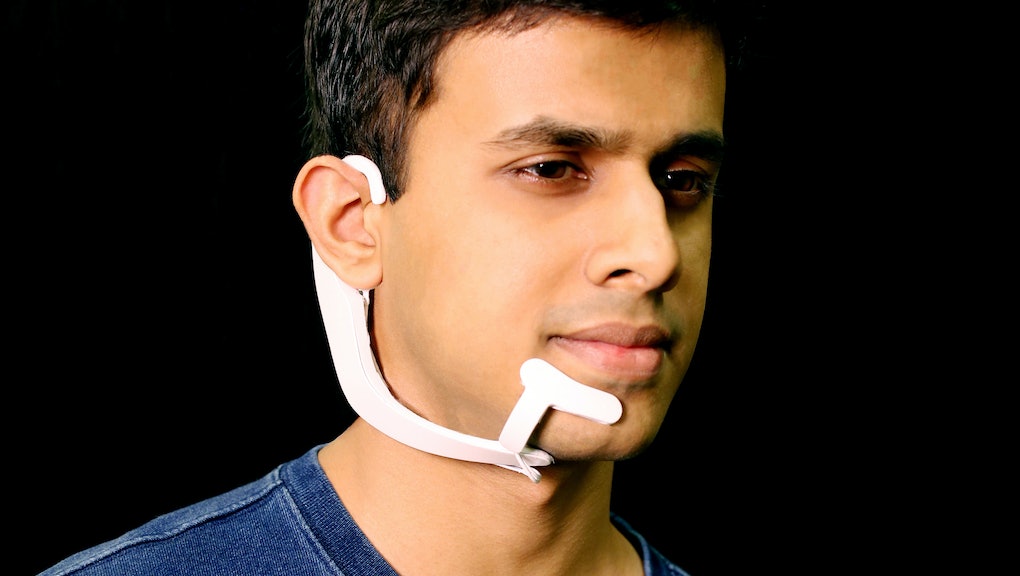 MIT has created a method of silently talking with computer interfaces.

The university has revealed development of a headset that is hyper-aware of users’ jaw muscles, allowing for soundless communication between the user and the headset. MIT calls the headset AlterEgo.

As seen in MIT’s video, the headset allows wearers to covertly interact with it to potentially solve math problems or interact with media. Sound output using the AlterEgo is almost just as discrete.

Using bone conduction, the AlterEgo headset sends subtle vibrations through the bones of your face that results in your inner ear receiving sound. This method of transmitting sound allows for wearers to hear the device without putting anything directly in their ear. Devices like Google Glass have done the same in the past.

It’s easy to see how something like the AlterEgo could complement other devices. Speaking with Amazon’s Alexa or Apple’s Siri using this could make using voice assistants much less awkward in public.

Other uses of AlterEgo could center around jobs. Thad Starner, a professor at Georgia Tech, extrapolates even further to career specific situations, like those directing airplanes. “You’ve got jet noise all around you, you’re wearing these big ear-protection things — wouldn’t it be great to communicate with voice in an environment where you normally wouldn’t be able to,” the professor said in MIT’s update on the project. Starner also noted how the headset could be useful to workers inside a printing press or special ops folks in quiet environments who could normally only communicate via hand gestures.

Not to mention one of the most important potential uses for AlterEgo: a giving voice back to those who have lost the ability to vocalize. A usage scenario like this speaks for itself.