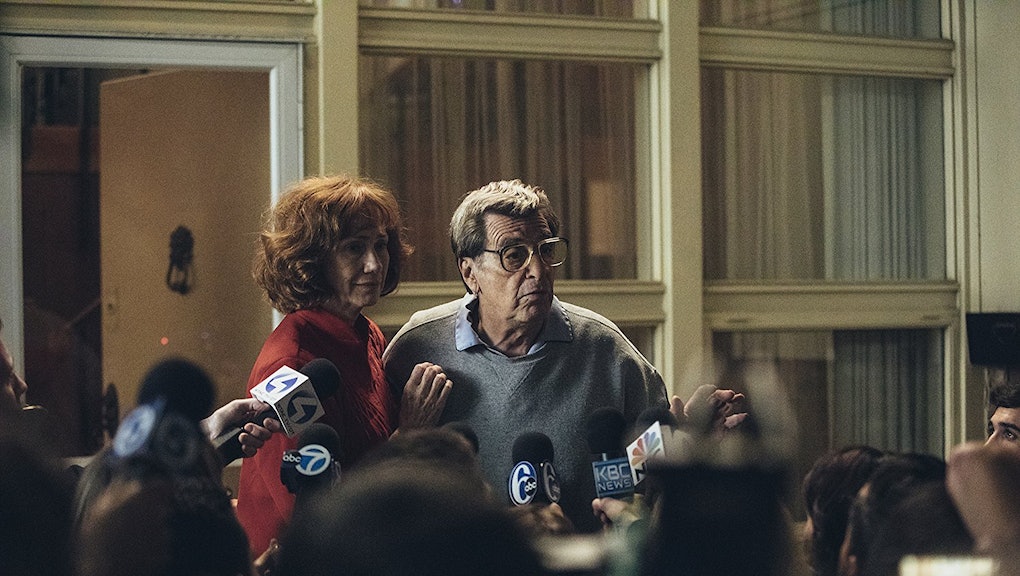 HBO’s new film Paterno isn’t a biopic in the traditional sense — it does center around the late Penn State University football coach Joe Paterno, but there’s barely any football to speak of. Nor is there much about the elements of Paterno’s legacy that made him a near-mythical presence at Penn State — his undefeated seasons, his philosophy of melding athletics and academics or his oft-quoted sayings on success, honor and integrity.

Instead, the film focuses on the two weeks in which the charges that former Penn State defensive coordinator Jerry Sandusky had sexually abused boys for years became a national news story, and Paterno, who had been notified about the abuse years before, was fired by the university. On Wednesday, Mic spoke with script author Debora Cahn about her choices in telling the story of Paterno in the last weeks of his coaching career.

In Cahn’s script, the 84-year-old Paterno is a man past his prime. Played with subdued resignation by Al Pacino, the Paterno of the film struggles to remember details and and barely engages as his family frets and worries about his role in the growing scandal.

The film doesn’t explicitly lay out just how much Paterno knew about Sandusky’s pattern of rape and abuse (or when he knew it), but it seems to be implied in a series of flashbacks that he and other coaches could have, at several points, done more to stop Sandusky from committing further abuse.

Cahn’s script also follows a young local reporter named Sara Ganim, played by Riley Keough, who quietly broke the Sandusky story months before the events of the film. As Paterno’s legacy as a campus idol is tarnished, Ganim’s reputation as a dedicated and compassionate reporter becomes cemented. In a postscript to the film, we learn that she went on to win a Pulitzer for her coverage of the scandal.

Here’s Cahn on setting up those parallel stories and on understanding Paterno’s legacy through the current #MeToo moment.

(Editor’s note: The following interview has been edited and condensed for clarity.)

Mic: How did you get attached to this project? And what excited you about telling this story?

Debora Cahn: They came to me with this movie really shortly after Trump was elected. The whole “locker room talk” incident was fresh in everyone’s minds. And here was something that had happened in a locker room, and the language around a really devastating criminal incident was reduced to “What happens in locker rooms is all just horsing around.” The parallel there was devastating. So with that parallel in mind, I just didn’t feel that it was something I could not do.

How did it feel to be working on this film while there’s the ongoing #MeToo movement, and ongoing conversations about holding men accountable for enabling abuse, or not reporting abuse?

DC: The #MeToo thing started when the movie had already finished shooting and we were in the editing process, but it’s the same story. To me, the part that’s most similar and most striking is that as soon the [Harvey Weinstein] scandal broke, everybody said, “Oh, everybody knew, everybody knew about Harvey, there’s nobody who didn’t know about Harvey.” In the same way, you look back on the Sandusky scandal and say, “Well, so many people knew.”

What is the process like when you’re writing the story of a true event and of a real person, and you don’t get to pick different choices for that character?

DC: I feel a huge sense of responsibility when I’m writing about real people whose families are still alive, or people who I know are still alive. Writing about Sara Ganim, I sat next to her in a theater at a screening two days ago. Certainly people who the movie is suggesting made really grave mistakes, I feel a lot of responsibility towards making sure that I am presenting them in terms that are based on as much fact and verifiable sources as I possibly can.

There’s a lot of conjecture about Joe Paterno that we did not use, because it was conjecture and we couldn’t verify it. So we take that responsibility very seriously. But ultimately, it’s not a documentary — we are dramatizing conversations that happened in rooms we were not in.

In our initial introduction to Paterno in the film, he’s in a hospital gown and he’s sort of frail and confused. Throughout the film he struggles to remember details — can you talk about the decision to depict him this way?

DC: Well, on the simplest level, that’s when this story broke and that’s when this man went from the apex of his career to fired and reviled in the course of two weeks. That journey happened when the guy was 84 years old. It’s possible that he had a clearer memory of these events than we portray, but to me it’s more interesting to give him the benefit of the doubt and say well, maybe it was’t clear. Maybe he didn’t remember all of the times that he heard this information, and it turns out there were many.

Let’s talk about the choice to give Sara Ganim’s story so much weight. In a lot of ways, she seems like a hero of the film. Why did you think it was important to share her story?

DC: The simplest reason is that she was the one who was interacting with victims and the families of victims. And it did not seem OK to me to tell this story without seeing Aaron [Fisher, one of Sandusky’s victims who is played by Benjamin Cook], whose life was also going through a massive and devastating upheaval.

Is Sara Ganim a hero? Absolutely. But Aaron Fisher saved the lives of a bunch of children who would have been abused by Sandusky had Aaron not come forward. And other people came forward because Aaron came forward. It was difficult and relentless and devastating for his life, but he saved a lot of kids.

There are still Penn State fans who see Joe Paterno as a hero and think that he didn’t do anything wrong. Were you thinking of those people as you were writing this script?

DC: I didn’t just think about them, I talked to them. I interviewed some people who were students on Penn State’s campus at the time and I thought a lot about them. One of the reasons that I was drawn to this story is that I know a lot of people who have gone through things like this, and I myself have certainly gone through the process of seeing somebody who I thought was a great hero and and inspiration turn out to be terribly flawed and have made horrific mistakes.

It’s devastating learning that your idols have clay feet and made terrible, terrible missteps. I feel for the people who went through it at Penn State.

What are you hoping that people will take away from this film? What are the greater messages we can glean from revisiting this story in this current moment?

DC: The No. 1 thing is that it’s important to talk about this stuff. And not to talk about it euphemistically, like I just did. I should have the courage to say it’s important to talk about sexual abuse and sexual abuse of children. We need to have a lot of language for how to do that. I have little kids — when I was writing this movie I had an 8-year-old and a 10-year-old — and those are the ages of Sandusky’s victims. I have to, and every parent has to, learn how to say in a lot of different ways it’s not OK for a grown-up to touch your privates.

Our inability to talk about these things and put language around it creates a situation where somebody like [former Penn State assistant football coach] Mike McQueary sees a 10-year-old being sodomized in the shower and then describes it as, “Something really bad was going on,” [which leads] to Joe saying, “Something of a sexual nature went on,” to [former Penn State vice president] Gary Schultz saying, “There was some horsing around going on in the shower,” to [former university President Graham] Spanier saying, “There was something that made somebody uncomfortable.” Well, “something that made somebody uncomfortable” is not legally actionable. We need to be able to say the words, we need to be able to ask questions about it and ask questions again.

Paterno premieres on HBO on April 7.