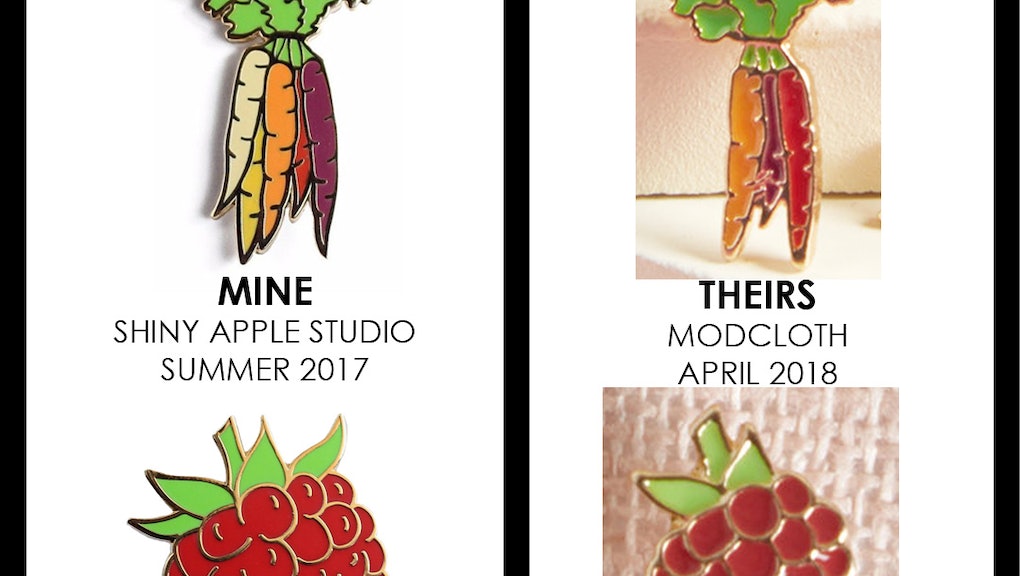 ModCloth is under fire again — a D.C. artist is claiming that the company stole two of her pin designs to make earrings.

Julia Walther of Shiny Apple Studio, who has been an artist for nearly a decade, posted about the alleged theft on Instagram on Wednesday evening.

“Guess what, guys!? ModCloth (now owned by Wal-Mart) has stolen and reproduced not one, but TWO of my original designs,” she wrote.

“If you’re willing and able, please let them know how uncool it is to rip off artists,” she wrote. “A message to customer support, a comment on their [Instagram] pages, a repost of this image, or anything else that puts this on their radar would mean the world to me and my poor fruits and veggies.”

The two designs in question are Walther’s bundle of rainbow carrots pin and a raspberry pin, which ModCloth sold as earring sets.

“On Monday, somebody sent me an email saying, ‘ModCloth looks like it ripped off your designs that were the carrots,’” Walther said in an interview with Mic. “I sent them a cease and desist, and then I was exploring the site yesterday and saw that they actually stole my raspberries too.”

Since yesterday, Walther said she’s filed another cease and desist regarding the raspberry design, and filed DMCA takedown notices, which go around the retailer itself and tell their server owners they are in breach of copyright law.

“I think it’s just an instance of they don’t have enough creativity to come up with something themselves,” Walther said. “I realize this is a fruit and vegetable pin, and it’s not hard to draw a carrot, but it’s totally unacceptable that they stole my carrot. These large organizations get stale and one of the ways I think the industry works is China might manufacture things and have this catalogue to shop around, so ModCloth might not even know that they’re copying me.”

Walther has had this happen to her designs before, but never with ModCloth. In December, ModCloth was accused of ripping a T-shirt design from a feminist brand that benefitted women’s organizations.

“I think there’s sort of a weird combination of rage and also it’s some kind of compliment that your work is something someone wanted enough that they imitated it,” Walther said. “The main thing is, I want it to go away. I don’t really need an apology, I just want it to be over and focus my time and energy on my work.”

In response to an email in regards to the matter, a ModCloth spokesperson wrote: “We have been in touch with Julia and assured her the correct parties have been informed and that we would be in touch if we need additional details from her.”