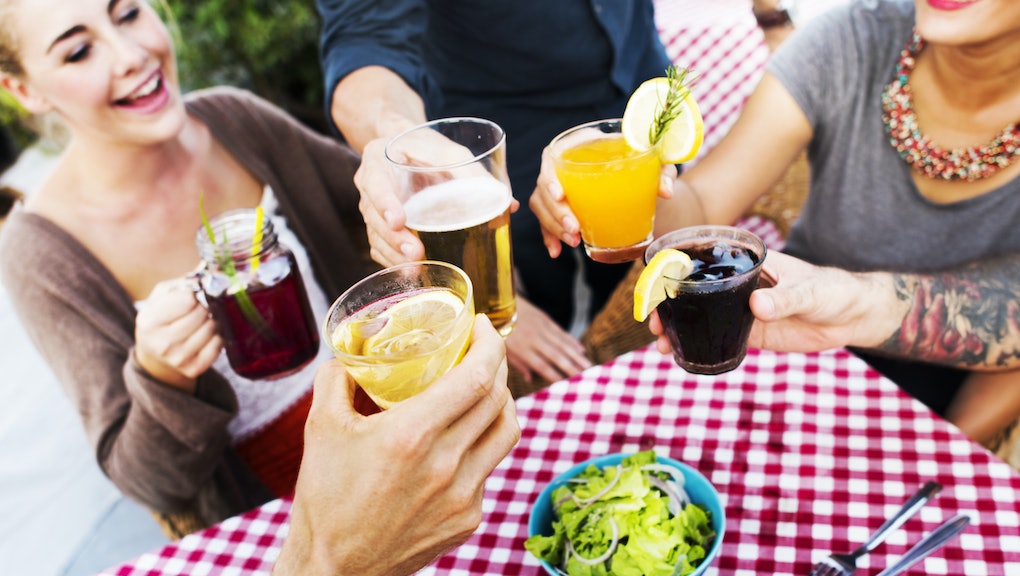 Are you guilty of spending money you don’t have to hang out with friends?

Between after-work drinks, weekend brunches and long weekends away, hanging out with friends can pack a financial punch. And don’t even get us started on the cost of making it to everyone’s weddings.

Nearly 40% of millennials spend money they don’t have on social occasions, according to a recent survey from Credit Karma. Most survey respondents — about two-thirds — regret such overspending, saying it induced buyer’s remorse. More than half of millennials put these charges on their credit cards, possibly racking up fees and interest charges in addition to the original bill.

The most common sources of overspending were dining out (60%), travel (40%) and buying alcohol (33%), according to Credit Karma’s survey. For a little more than half of millennials, it’s a rare indulgence, with respondents saying they overspend just once a year. That said, more than a fifth of respondents admitted to spending money they didn’t have to keep up with friends at least once a month.

It’s not hard to see how millennials in particular are predisposed to social spending. In Kids These Days: Human Capital and the Making of Millennials, author Malcolm Harris documents how the rise of social media has helped commodify a number of “formerly free” activities — like spending time with friends — by placing so much socialization in a context of boastful posts and online monetization. Consider the example of Lissette Calveiro, a 26-year-old publicist who told the New York Post she sunk $10,000 into debt trying to perform for her thousands of Instagram followers.

How to cut down on social spending

Calveiro’s story is perhaps an extreme example: Credit Karma’s survey suggests the vast majority of young Americans spend $100 or less on socializing during the weekend. Depending on the cost of living in your city, that could be an absolute steal or a big splurge. A cocktail — Instagram-worthy or not — usually costs about twice as much in New York as it does in St. Louis, according to Credit Karma.

What drives us to spend money we don’t have so frivolously? It mostly comes down to FOMO. Thirty-six percent of survey participants said they overspent out of fear they wouldn’t be invited to future events, with the rest saying they didn’t want to lose friends, feel like an outsider or be judged.

If that sounds like you, it may help to rethink the way you say “no.” The way you deliver a message really counts, so instead of passing on an activity you can’t afford via text or email, try to say turn down the invite face-to-face or at least make a quick phone call. If you really think your failure to say yes will lead to fewer invitations in the future, pair your “no” with some ideas for a more cost-effective raincheck.

Finally, as you set up your budget, remember to account for some of those last-minute trips, concerts and birthday parties you’ll want to attend.

If you constantly find yourself coming up short when an impossible-to-resist invite comes your way, consider an app that can help you track down sources for “found money,” whether it’s refunds, price-tracking or even automatically depositing a portion of your paycheck into a savings account so you don’t have to remember to do it yourself.