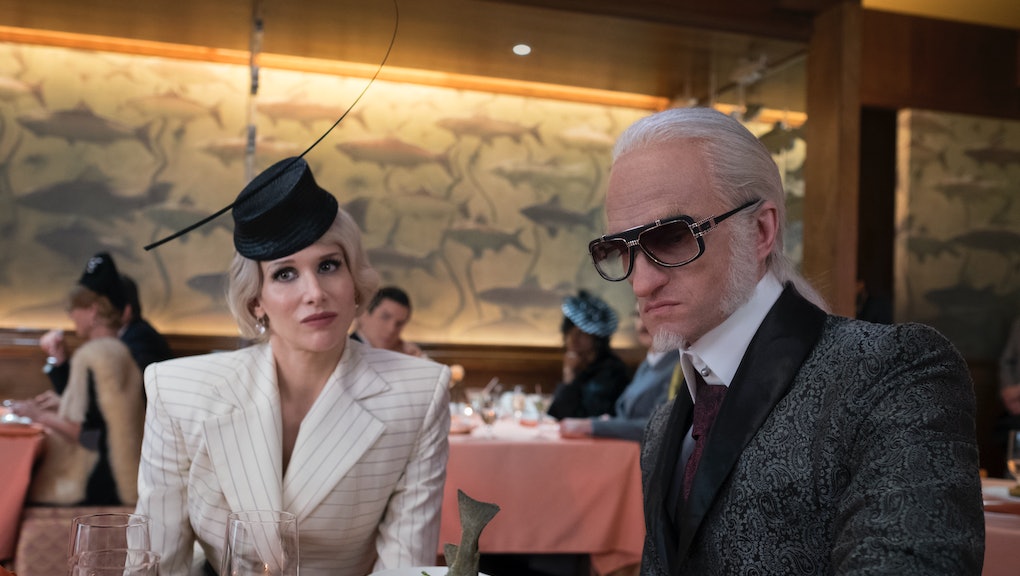 Every surface in season two of Netflix’s A Series of Unfortunate Events looks as though it’s covered in a decade’s worth of dirt. The show’s world — adapted from Lemony Snicket’s novels of the same name — isn’t a place where people, on the whole, are doing great.

Despite that, the entire series is bursting with life. The show itself doesn’t appear to take place in any specific time period, but almost everything has a Victorian, late-19th-century vibe to it. Every chair, every peacoat, every old-timey top hat has an absurdist, baroque-level of detail that imbues an otherwise oppressive universe with a wacky sense of levity. That, in large part, is due to the work of season two costume designer Cynthia Summers.

The series’ most well-known looks involve those of its villain, Count Olaf (Neil Patrick Harris), a scheming con artist hoping to steal the fortune of the show’s main protagonists, wealthy orphans Violet, Klaus and Sunny Baudelaire. Despite Harris’ incredible, chameleon-like performances in each of Olaf’s many disguises, season two succeeds largely because of the performances — and costumes — of its supporting cast.

In particular, Carmelita Spats (Kitana Turnbull), Larry Your-Waiter (Patrick Breen) and Esmé Squalor (Lucy Punch) help elevate season two beyond its predecessor. In a phone interview with Mic, Summers broke down how three looks from the new season — which is now available to stream on Netflix — came to be.

Carmelita Spats and her pink dress

“She’s that kid in school that for some reason, all of the adults and all of the kids — she just dominates everything and nobody calls her on any of her crap,” Summers said.

On the whole, Prufrock is overbearingly gray, filled with books that haven’t been opened in ages and metal shacks dripping with slime. To get that look, Summers said the show’s editors “throw this patina over the whole thing,” which means the costumes themselves have to be much brighter to compensate.

“I might have the kids in really, really bright colors, but when you finally see it on screen, it’s got this pallor over it,” she added. “Everything is 10 shades duller. It’s kind of like a science project trying to do this show, as far as color and tone go.”

For Spats, who has to stand out like a manic, demonic beacon of evil, the challenge of getting her pink frills to read onscreen was magnified tenfold.

“It was a very specific pink that we chose [for Spats],” Summers said. “In fact, we made the pink. We dye and create a lot of our own fabrics, and we needed something that would work tonally once we put our lighting on it to get it back to the color of pink that we wanted.”

In the show, Spats comes off as a funhouse mirror reflection of everyone’s favorite redhead, little orphan Annie — but Summers said she was actually inspired by the character of Nellie Oleson from the TV series Little House on the Prairie, which aired from 1974 to 1983.

“She wasn’t going to be a redhead at the beginning,” Summer said. “There was talk of her being a blonde, but I really pushed for her to be a redhead. When we did our first illustration, we referenced [actress Alison Arngrim] from Little House on the Prairie. She was not a redhead — she was a blonde — but she had those tight pin curls and [her character, Nellie] was just an awful kid. We used her as our template for our first inspiration for Carmelita.”

Those absurd salmon costumes worn by the waiters at Café Salmonella

The whole aesthetic of A Series of Unfortunate Events induces a kind of dreary, spiritual nausea, but one sequence in particular brings on actual nausea: the lunch scene in “The Ersatz Elevator: Part Two.” Here, the Baudelaire siblings’ temporary guardian takes the kids to the most “in” restaurant in town, Café Salmonella, where everything — and I mean everything, including the water — is salmon-themed.

That inescapable presence of salmon extends to the waiters themselves, who bobble and wiggle among the café’s crowded tables in massive, oversized salmon costumes that allow only their faces to poke out.

“You’ll notice the chair backs are using the same fabric as the salmon waiter costumes, so this was a big collaboration between the set decorators, art direction and [the costume department],” Summers said.

Summers noted that the costumes themselves were quite a feat of engineering, made from a “a black, dense foam” that was heated up and molded to the required shape. But the costumes succeed mostly because of the space of the café itself, she added.

“It might be hard to tell, but the set is built like a rectangle, so it’s narrow and long,” she said. “At one point, you’ll see [the waiters] all going one direction, heading ‘upstream’ towards the bar.”

Of all the characters in season two, the one who seems like the most fun for a costume designer is Esmé Squalor, the ostentatious, nouveau-riche villain (and temporary guardian to the Baudelaire siblings), whose hunger for status trumps all else. Despite her passion for fashion, Esmé’s looks communicate a lack of refinement, as though she’s never quite sure when to take her foot off the gas. At one point, she’s disguised as a nurse but can’t resist capping off the look with a white cape and giant diamond brooch.

But there’s another look that sticks out for Summers. At the beginning of “The Vile Village: Part One,” Esmé — recently allied with Count Olaf — heads to a ghost town with an old Western aesthetic. To mark the occasion, Esmé wears a red beret adorned with a costume-y sheriff’s badge and peacock feather.

“I think that combination says it all,” Summers said. “That’s the beauty of Esmé. Olaf’s disguises are so heightened and ridiculous, but they’re ridiculous in a different way because it’s clearly still him. [Olaf’s] disguises are always a take on the situation he’s in, whereas Esmé’s looks are fashion-driven. Everything always has to be ‘in’ and there’s a fashion reference to everything she wears.”

Summers said this red look in particular was supposed to channel the aesthetic of Italian actress Sophia Loren, “minus the beret.”

“She has the most costume changes per episode and I think that speaks to her frenetic, crazy idea of what she wants or needs out [of] life, because she doesn’t really know,” Summers said.

To convey that manic energy, actress Lucy Punch is almost always moving, whether it’s the gnarling of her fingers as she gestures wildly with a closed fist or her desperate, twitchy steps from one side of a room to another. Summers said designing Esmé’s high-fashion outfits with a mind for practicality was an added challenge.

“We shoot each episode for 24 days, and that’s a long time to be wearing something that’s not comfortable,” Summers said. “Lucy, even more so than Neil, is very physical. Her arms are always flailing all over the place, she’s taking giant strides and she’s always really cocking her hip, so her costumes can’t be restrictive. It’s ... like a science project, trying to figure out what looks good, what everybody needs out of the costume and what Lucy can actually perform in.”

Summers said Esmé’s looks go even further off the rails in season three — a release date for which has yet to be announced — but declined to share any more details than that.

“Just wait,” she said. “She really peaks in season three. It was a big challenge, because it was like, ‘How am I going to make that fashionable?’ And I can’t really speak about that yet, but it really worked out. I love her.”