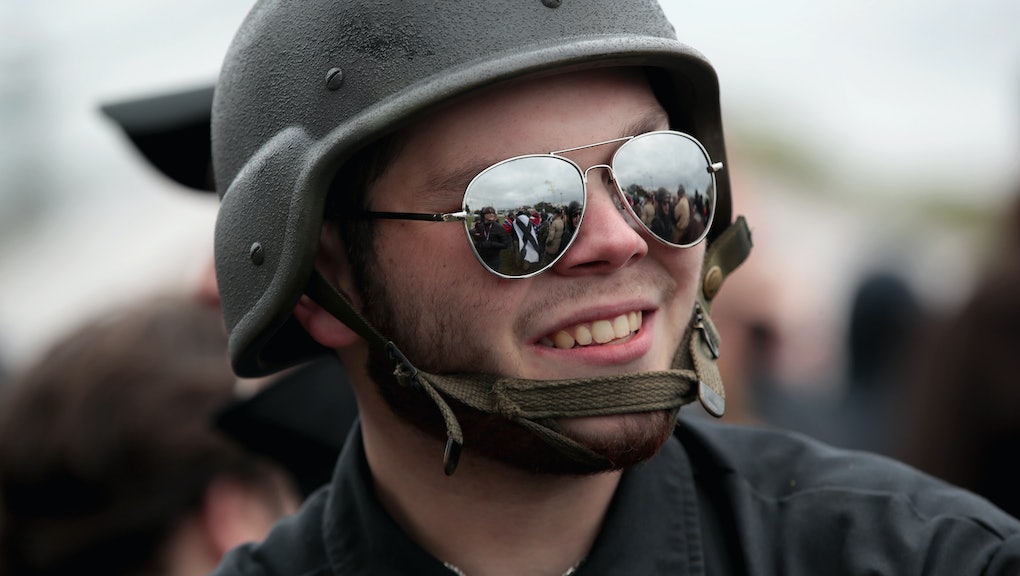 When most people think of modern neo-Nazis, they’re often, without realizing it, thinking of the Traditionalist Worker Party. At the infamous Unite the Right rally in Charlottesville, members of the TWP in black helmets and Dickies work shirts formed a phalanx of white nationalists with riot shields, chanting “blood and soil” and squaring off against anti-fascists.

A leaked trove of server data from chat app Discord chronicles the internal life of an organization as it rose to national prominence, mismanaged its fame and ended in disgrace. The chat logs were published Thursday night by Unicorn Riot, a grassroots media collective that’s published several massive troves of white nationalist communications. The collected channels contain nearly 200,000 messages from over the past year, documenting the everyday lives of disaffected young white men as they share white supremacist memes, chat about the challenges of coming out as white nationalists to family and friends, and, rightfully, worrying over whether they’re being monitored by anti-fascists.

If most Americans see the Unite the Right rally as a dark event in America’s contemporary history, white nationalists largely saw it as a success for recruiting and national media exposure. The rally is still part of the divisive “optics” debate in the white nationalist community over how the movement should appear to the public for the sake of growing their movement.

Where Unite the Right might have given the movement public momentum, it was catastrophic to individuals as anti-fascists combed obsessively through photos and videos from the event to publicize the identities of everyone involved. Many participants at the rally lost their jobs for attending.

On a server called “The Silver Guild,” white nationalists tried to start a small fraternal network wherein a group including a security guard, a sound engineer, a PC repair guy, someone from “a pretty racist union” in Michigan, and an insurance salesman tried to exchange advice about how to get work when your face is on the front page of every local newspaper identifying you as a celebrity racist. It was difficult for some of them to get their home enterprises, like making flags or producing sodium to sell on eBay, to sustain their lifestyles, and they traded tips on how to make it through job interviews as a known white nationalist.

“Equate your political views with quality work,” one Baltimore-area neo-Nazi with video production expertise advised the group, advising him to tell employers that, “You may think a [white nationalist] is full of hate, but he will get shit done.”

Over time, a combination of internal disputes and public embarrassments has left the white nationalist movement in shambles. Richard Spencer declared that “antifa is winning” the battle in the streets and said he doesn’t intend to continue his infamous campus appearances. Chris Cantwell, popularly known as the “crying Nazi” from Unite the Right, admitted publicly that he’d become an FBI informant.

And then, the Traditionalist Worker Party collapsed. On March 13, TWP leader Matthew Heimbach was arrested for allegedly assaulting both his spokesman, Matt Parrott, and his wife, who is also Parrott’s step-daughter. Heimbach was having an affair with Parrott’s wife, and Parrott set up a sort of sexual sting operation using his wife as bait to see if Heimbach would try to seduce her again. It’s a complicated network of sexual and familial relations — we made a diagram here. Parrott resigned from the movement, telling the Southern Poverty Law Center that he was “out of the game,” before deleting the TWP’s website and membership rolls.

Now that the organization is officially disbanded, with Matthew Heimbach silent in the past few weeks and his adherents looking for new opportunities in a fracturing movement, it’s unclear if the remaining white nationalists will rally or give up the project. In the last days of the party’s existence, members speculated that perhaps the solution would be to rally behind leaders who didn’t have wives or sex. Women are just too much of a vulnerability for the movement.

“This is why it’s good to have a leader who’s celibate,” one member said in an audio chat.

“That’s why I don’t have a girlfriend, that’s totally why,” another joked in response. “I’m thinking ahead. Now my rise to power begins.”