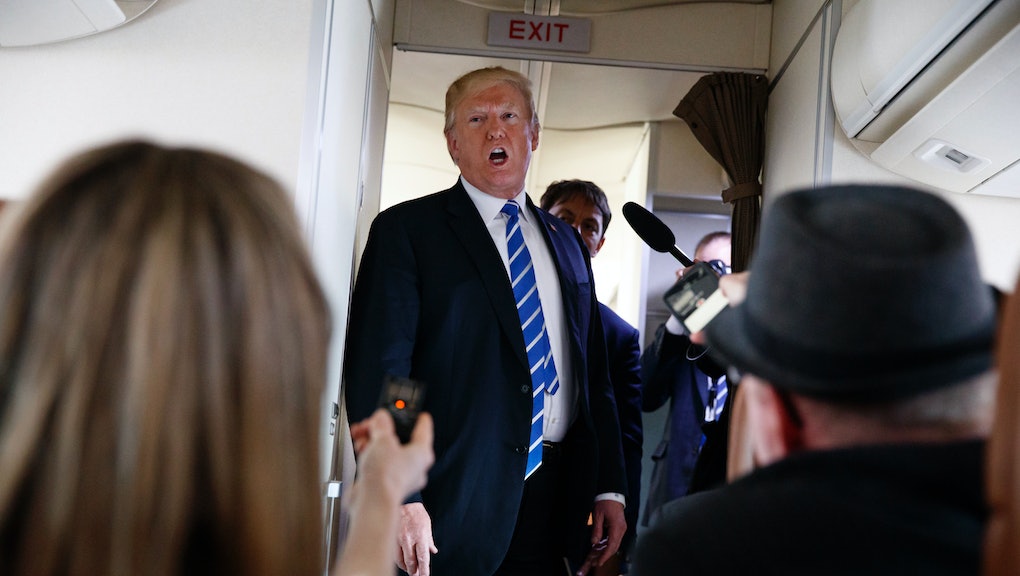 In the midst of an escalating trade standoff between China and the U.S. and a chemical weapons attack in Syria, President Donald Trump took to Twitter Sunday morning to share his thoughts on the growing tensions between the economic powers — and, of course, hit back at his critics.

“Many dead, including women and children, in mindless CHEMICAL attack in Syria. Area of atrocity is in lockdown and encircled by Syrian Army, making it completely inaccessible to outside world. President Putin, Russia and Iran are responsible for backing Animal Assad,” Trump tweeted Sunday, referring to Syrian president Bashar Al-Assad.

The president also singled out former President Barack Obama’s Syrian response, tweeting, “If President Obama had crossed his stated Red Line In The Sand, the Syrian disaster would have ended long ago! Animal Assad would have been history!”

In 2012, Obama referred to the potential use of chemical weapons in Syria as a “red line” that would “change his calculation” on the U.S. response in Syria.

“We have communicated in no uncertain terms with every player in the region that that’s a red line for us and that there would be enormous consequences if we start seeing movement on the chemical weapons front or the use of chemical weapons,” Obama said at the time.

When Obama asked Congress to approve limited military intervention in the form of airstrikes after a 2013 chemical weapons attack in Syria, however, Trump had a very different view of what the president should do, repeatedly tweeting that the U.S. should stay out of the conflict.

“How bad has our ‘leader’ made us look on Syria. Stay out of Syria, we don’t have the leadership to win wars or even strategize,” Trump tweeted in August 2013.

In response to the current chemical attack, officials from the Trump White House have said that a military response is a possibility. In an appearance on ABC’s This Week Sunday, national security adviser Thomas Bossert said he “wouldn’t take anything off the table” with regards to a U.S. military response.

Obama wasn’t the only one of Trump’s enemies to draw criticism on Sunday, however. Trump also took aim at former opponent Hillary Clinton, tweeting out a Fox News quote criticizing the FBI’s supposedly “rigged investigation” into her emails, and blasted the Washington Post for their recent article about White House chief of staff John Kelly.

“The Washington Post is far more fiction than fact,” Trump tweeted Sunday. “Story after story is made up garbage — more like a poorly written novel than good reporting. Always quoting sources (not names), many of which don’t exist. Story on John Kelly isn’t true, just another hit job!”

The recent Post report details “recurring and escalating clashes” between Trump and Kelly, alleging that the chief of staff has been on a “downward arc” and lost credibility and trust among members of the administration. The details in the article are based on interviews with 16 administration officials, consultants and presidential confidants, though many remained anonymous, the Post noted.

Trump has frequently criticized the Washington Post for its reporting on the president. Recently, Trump has also turned his attention to Amazon, whose CEO Jeff Bezos also separately owns the Post, alleging that the corporation hurts the U.S. Postal Service — which is largely untrue.

One political leader who Trump wasn’t willing to criticize Sunday was Chinese President Xi Jinping, even as tensions escalate between the U.S. and China over trade. The U.S. and China have both imposed billions of dollars in tariffs against the other countries’ imports in recent days — with potentially more on the way — causing the stock market to take a hit and sparking fears of a trade war.

“If the United States disregards the opposition of China and the international community, and insists on unilateralist and protectionist trade practices, the Chinese side will follow through to the end and will not hesitate to fight back at any cost,” the Chinese Commerce Ministry said in a statement Friday, according to CNBC.

Trump, however, was optimistic Sunday about how the situation would resolve.

“President Xi and I will always be friends, no matter what happens with our dispute on trade,” Trump tweeted. “China will take down its Trade Barriers because it is the right thing to do. Taxes will become Reciprocal & a deal will be made on Intellectual Property. Great future for both countries!”