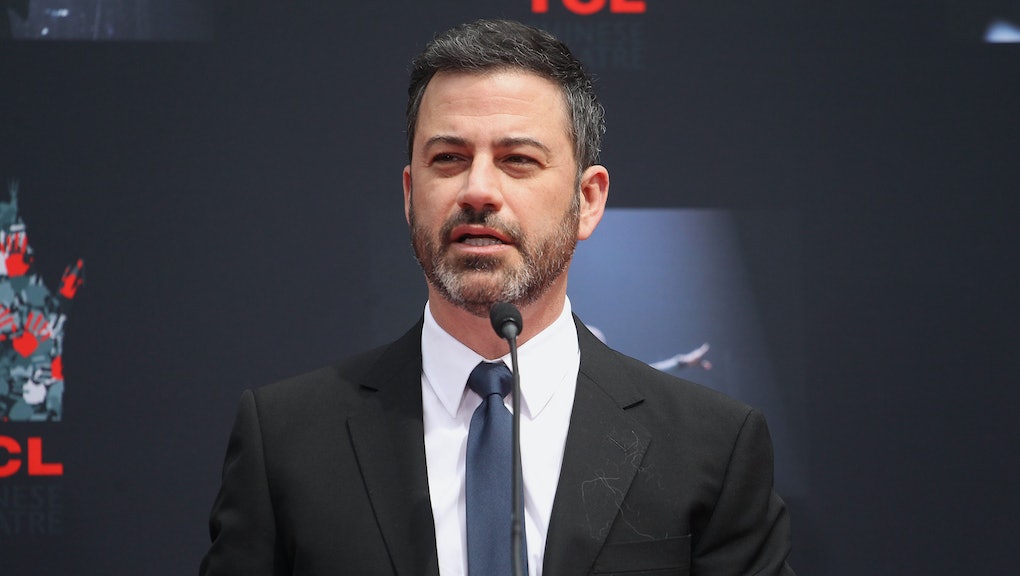 It’s been nearly a decade since actor and singer Hilary Duff released her instantly iconic PSA explaining why it’s not OK to call something gay as an insult — but apparently, some comedians still haven’t gotten the message.

Over the past weekend, both Jimmy Kimmel and Chelsea Handler came under fire for using homosexuality as punchlines meant to demean conservative voices. Friday, Handler tweeted, “Jeff Sessions is definitely a bottom.” Thursday, she tweeted an image of Trump with wind-blown hair, saying “Imagine waking up, turning over, and seeing @realDonaldTrump and his bedhead looking like this. I feel so sorry for Putin.”

Kimmel eventually apologized for spouting “vitriol” at Hannity, saying that kind of rhetoric “does nothing good for anyone.” He also added, “I most certainly did not intend to belittle or upset members of the gay community and to those who took offense, I apologize.”

Handler, however, simply doubled down. “I’m a bottom and I’m proud of it,” she responded to someone who took issue with her initial tweet. (Mic reached out to Handler’s publicist for comment and will update with any response.)

These kinds of jokes that hinge on men having sex with one another — and using the terms “top” and “bottom” to make value judgments about their masculinity — are nothing new. In July, both Slate and Vox wrote about this recurring trope in comedy, specifically as it relates to jokes made about sex acts between Trump and Russian President Vladimir Putin, but the trend persists.

In fact, many prominent comedians — like Ricky Gervais and Jerry Seinfeld — often rail against criticism from their audiences, accusing them of being too sensitive.

To help unpack this issue further, Mic conducted a series of phone and email interviews with five queer men working in comedy to hear how this type of humor affects them personally and why it continues to exist.

(Editor’s note: The following interviews have been edited for clarity and length.)

Mic: What was your reaction to seeing what Handler and Kimmel tweeted?

Guy Branum: It’s tiring but it’s not new. Both Chelsea [Handler] and Jimmy Kimmel are people who cut their teeth doing comedy in the late ’90s, early 2000s, when that was just a go-to joke that everyone relied and depended on — “Let’s call the homophobe gay, won’t that be funny and ridiculous?” — and they don’t really think about the construction of homosexuality they’re making. They don’t think about the way it reflects on actual gay people. And I think it’s just reflective of the fact that comedy, for such a long time, has treated gay people as a frequent object, but has very few actual gay voices within it.

Were you surprised by their subsequent reactions to criticism?

GB: I do think it’s nice and a little bit surprising that we have more people who have figured out how to listen to the response when something they say steps on some toes. We need to get better at that.

I [also] think it’s really good and exciting that gay men are starting to have some self-respect. For such a long time, we just wanted to feel included and when a comic made a joke about us that wasn’t saying we were perverts or sex criminals, we didn’t really care if it characterized us as ridiculous. We wanted to show we were cool and were in on the joke.

Mic: What was your reaction to seeing what Handler and Kimmel tweeted?

Bowen Yang: My immediate reaction was a visceral revulsion, basically. Maybe I just haven’t been paying attention to the news of the day enough, but there was very little context [to Handler’s joke about Sessions.] What I have to say about Chelsea is I respect her as a comedian and as an artist — I’ve followed her work for a very long time — and I’ve noticed that since the election, she has made a very earnest effort in trying to understand other people’s experiences more. I’m sure she’s seeing the response [she’s getting to her tweet] and I’m hoping she’ll let this be this edifying moment where she has a positive takeaway.

What would you say to people who argue that this kind of humor is just that — humor — and that it’s a way to call out people who are powerful and oppressive?

BY: That it’s a great instinct to call someone out as long as you’re not throwing an entire community under the bus. You don’t have to punch down in order to punch up. That’s what this feels like, that she’s making a joke about Jeff Sessions at the expense of queer people. I think it’s just lazy and simplistic to lump in [a vulnerable community] when you’re punching at someone else.

It’s not my place to say where it all comes from, but as a queer person of color, I’ve observed a lot of “humor” in the LGBT community at certain ethnic groups or age groups, whatever it is, where people say things that are simplistic and lazy that are at the expense of other people’s experiences.

My issue is always that it’s just laziness. You can do better than this. You can make a better joke than shitting on some group of people. You are a better comedian than that. Hopefully things like this shift the conversation in a positive way.

Mic: Why do you think this particular joke format is something late-night comedians so consistently fall back on?

Ryan Houlihan: Writing jokes is hard work that requires you to be at your most clever, and people who pump jokes out can get lazy. Homophobic, transphobic and racist jokes are cheap, lazy gags that are guaranteed to at least get uncomfortable chuckles from people who feel some transgression when discussing those topics. But the problem with cheap gags is that they come at the expense of both the comedian and the group whose otherness they’re exploiting for uncomfortable chuckles.

Chelsea’s defense for all this stuff is usually, “This is so stupid. I was just being stupid, it’s just funny — funny is funny,” and other late-night hosts usually similarly trivialize complaints in that way. They act as if they’re trivializing their own behavior, but what they’re actually doing by brushing this stuff off is further trivializing the community who is telling them they’ve been harmed by these statements.

Mic: How do you feel about what Kimmel and Handler tweeted over the weekend?

Carey O’Donnell: I am a fan of both of theirs, I just think it’s careless and lazy comedy to throw gay sex in the soup with ghouls like Trump and Jeff Sessions. I don’t think it’s their intention to be homophobic, which is sadly more troubling. It shows that gayness is still a punchline, like it’s a sitcom in 1998. Do better. A comedian joking that being a bottom is a bad thing is not only hack, it’s just untrue. Bottoming is great! Gay sex is great!

Mic: Why do you think these types of incidents keep happening?

Jay Jurden: I feel the jokes are coming from a place of good intentions. They’re coming from a place of wanting to mock this regime change that’s happened in America, but it’s still rooted in, “This person is less-than because they’re a receptive queer partner,” or “This person is less-than because they are the ‘female’ participant in this sex act.”

Right. The defense is probably something like, ‘Well, it’s just a joke to show that Trump is in Putin’s pocket,’ but the backfiring effect is that it’s also homophobic.

JJ: It’s an odd hill to die on. As a queer comic, I would love to talk about Kacey Musgraves’ new album instead of this shit — there are so many other important gay issues right now.

Well, if you have any great jokes about Kacey Musgraves’s album, I’ll happily include them.

It’s too easy for comics to be making these jokes in 2018. We’re well beyond that.

Also, I don’t want these comics to issue a public apology. All I want them to do is make sure Ariana Grande gets to do a concert version of Wicked. That’s it. That’s all I want. If they put money toward that, I’ll be happy. I want them to pay it forward.