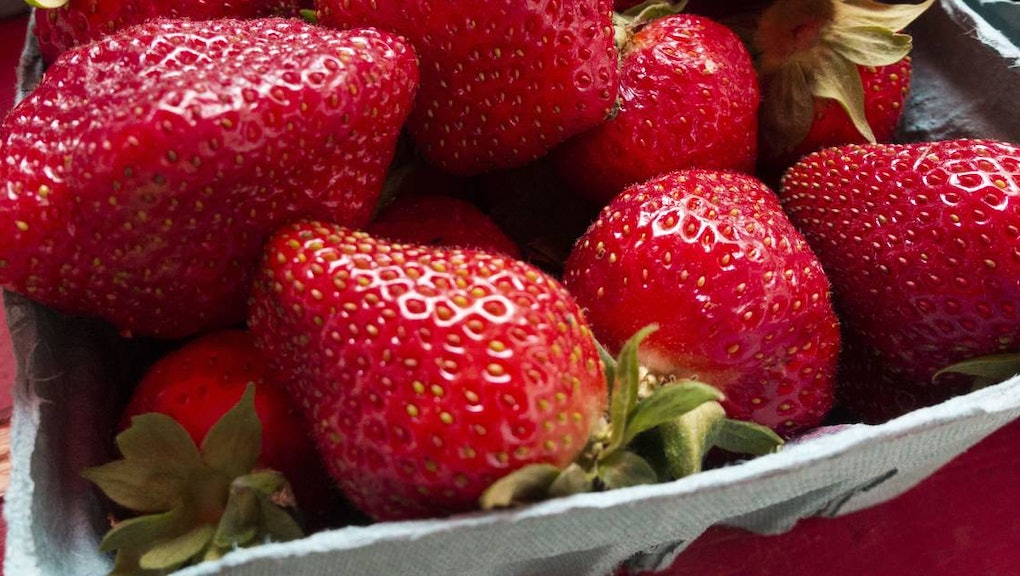 The 2018 dirty dozen: The fruits and veggies with the most pesticides

The Environmental Working Group released its latest dirty dozen list on Wednesday, highlighting the 12 fruits and vegetables that, according to their tests, contain the greatest amount of pesticides.

Strawberries were again found to be the biggest offender — in the EWG’s findings, one strawberry sample contained 22 different pesticide residues. And, “one-third of all conventional strawberry samples contained 10 or more pesticides,” the EWG reported.

“In general, produce with a thick outer peel that you don’t eat is going to have less pesticide residues than leafy greens or produce with a soft, edible skin,” Sonya Lunder, a EWG senior analyst and lead author of the guide to pesticides in produce said in a video. Produce that the EWG considers the safest to eat landed on the clean 15 list, which includes avocados, corn and pineapple. These all tend to have a thick barrier between the soil and the produce’s edible parts.

These fruits and vegetables were found to have the highest amounts of pesticide residue, with strawberries at the top of the list. The EWG recommends buying organic versions when possible.

The EWG ranked hot peppers as a sort of bonus on this list: Those sampled contained insecticides that have been found to be harmful to the human nervous system, but did not meet the EWG’s “traditional ranking criteria.” The group advises people who eat hot peppers frequently to choose organic versions. “If you cannot find or afford organic hot peppers, cook them, because pesticide levels typically diminish when food is cooked,” the report suggests.

The produce on this list was found to have the least amount of pesticide residue, making conventional, non-organic versions safer to consume. Avocados were found to be the cleanest: Fewer than 1% of those sampled turn up detectible pesticides, the EWG reported.

The health risks of pesticides

“Buying organic versions of the dirty dozen helps you skip the toxic chemicals, while buying conventional versions of the clean 15 helps your wallet,” Lunder said. According to EWG, pesticides can pose some serious health risks: They’re linked to brain and nervous system damage, cancer and hormone disruption. In addition, a recent study from the Harvard School of Public Health linked consuming high-pesticide-residue foods and problems with fertility. Women who reported eating a little more than two servings of produce associated with the dirty dozen had “a 26% lower probability of a successful pregnancy compared to women who ate less than one serving a day of these foods,’ the EWG wrote.

Though small doses of pesticides may be harmless, the accumulation of these small doses may lead to trouble later on, and the greater impact of pesticides is still scientifically unclear. “We do not know the long-term health effects as the result of intaking small amount of pesticides from foods on the daily basis,” Chensheng Lu, associate professor of Exposure Biology at the Harvard T.H. Chan School of Public Health previously told Mic.

Many health professionals have recommended avoiding pesticide exposure when possible. In 2012, the American Academy of Pediatrics issued a policy statement calling on schools, parents, medical professionals and government to protect children from pesticides. The academy urged pediatricians to “become familiar with the effects of acute and chronic exposures to pesticides; learn what resources are available for both treatment of acute poisoning and addressing lower dose chronic exposures in children.”

While buying organic versions of the items on the dirty dozen seems like a practical solution, not everyone can afford the luxury of organic, whether the produce is cost-prohibitive, unavailable or otherwise. The predicament is tricky, since the report is not meant to scare Americans off from eating more fruits and vegetables (only one in 10 American adults are getting enough as is).

The controversy over pesticides

While the EWG’s work on pesticides is meant “to give science-based advice to people who want to limit their ingestion of pesticide residues,” as Lunder stated in an email, not everyone thinks the information is valuable. “We don’t believe that there’s any credibility in this list,” Tamika D. Sims, director of food technology communications at the International Food Information Council said in a phone interview. “Even if you can afford organic, I don’t know why you would spend more money. I think you’ll get the equal amount of nutrition and the equal amount of safety either way.”

It’s important to note that the IFIC has been flagged as a “food and agriculture industry front group,” meaning it promotes the ideas of Big Food (a group that relies on pesticides). Still, as a consumer, it can be confusing to navigate the grocery store with such conflicting information on what’s safe to eat.

One thing the EWG and the IFIC can agree on: We should all be eating more fruits and vegetables. Whether you decide to make them organic is of personal preference.