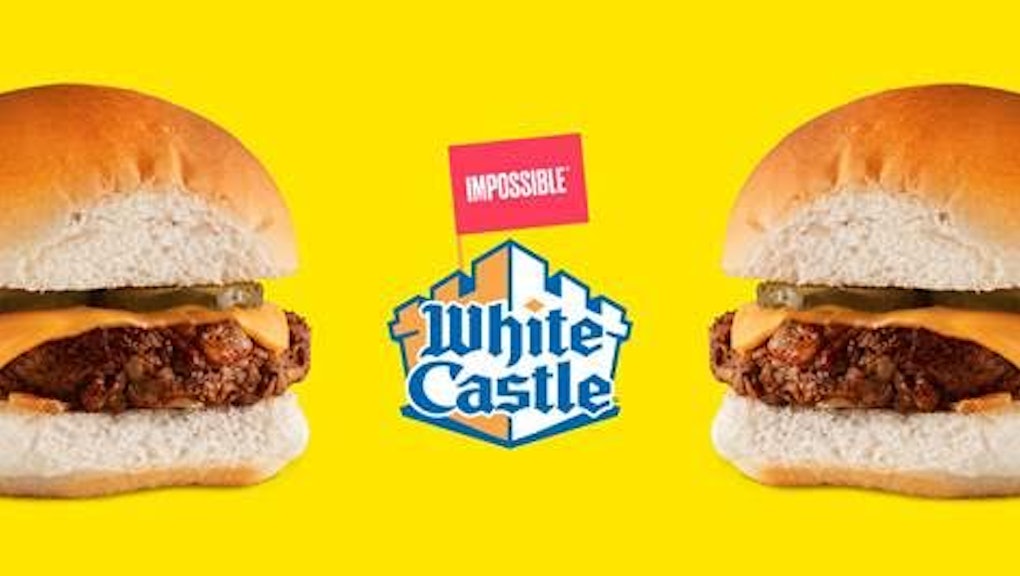 White Castle appears to be working hard to shed its stoner image: On Thursday, the fast food joint announced that the Impossible Burger, the realistic, bleeding burger that’s 100% vegetarian, is now available on its menu.

While smaller-scale restaurants like Bareburger and Umami Burger currently serve the trendy, eco-friendly burger at their shops — and even Jaden Smith has found a way to get his name associated with it — White Castle is the first major fast food burger chain to make such a partnership. The offering may eventually roll out nationwide, but for now the Impossible Slider is getting its start in 140 White Castle restaurants in New York, New Jersey and the Chicago metropolitan area. The Impossible Slider retails for $1.99 — for comparison, the original slider costs around 80 cents in the same area.

One doesn’t necessarily think of White Castle as being vegetarian-friendly, though this isn’t the chain’s first foray into plant-based options. Its original veggie slider, made with Dr. Praeger’s veggie burger, launched in 2014. In January it added a black bean slider to its lineup.

The bleeding veggie burger officially launched in 2015; it’s been attracting enthusiastic headlines and big money ever since. A recent financing round bumped the Impossible Burger’s investments to a total of $396 million. The faux meat is engineered in a lab, made with wheat protein, coconut oil and potato protein and is meant to replicate both the taste and the texture of a standard burger. Environmentalists get joy from the patty not just because it saves animals, but because it uses 95% less land and 74% less water than the standard beef burger. And — to put it in perspective — every White Castle customer that chooses the Impossible Slider over a conventional beef slider saves the amount of water used in a 10-minute shower.

Nutrition-wise, the Impossible Burger doesn’t fare much better than a standard beef burger — though, before toppings come into play, it contains no cholesterol and it’s free of both antibiotics and hormones. And if you’re really counting, it tends to have slightly fewer calories and slightly more protein than a cow-based burger.

While there isn’t much current and accurate information on the number of vegetarians in the United States, a 2008 study commissioned by the Vegetarian Times found that a little less than 3% of the American population identifies as vegetarian or vegan. Regardless, White Castle’s new offering is a sign that that both mainstream retailers and consumers are embracing animal-free alternatives — and that’s an exciting trend to witness.