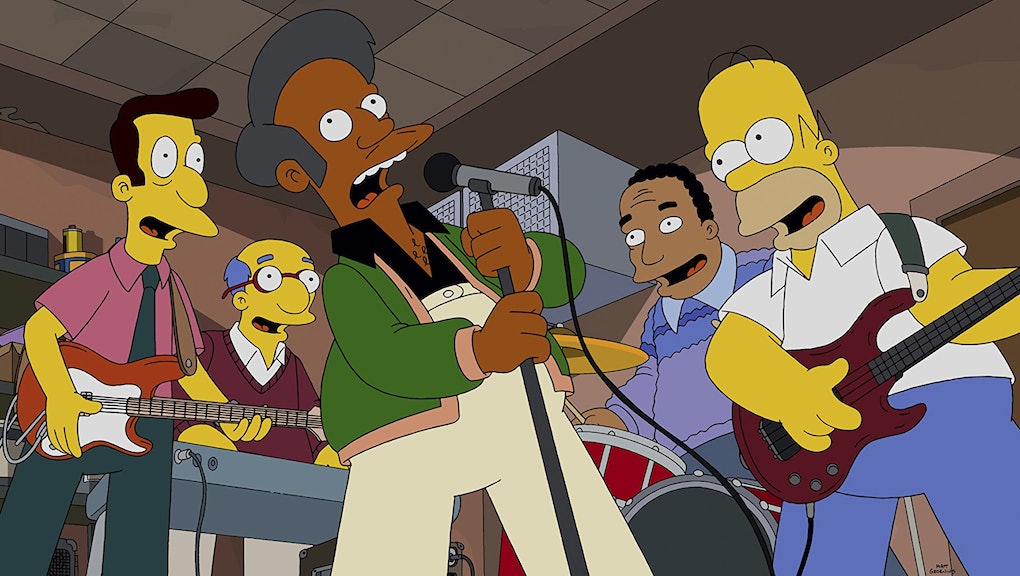 Sunday night’s episode of The Simpsons had Marge and Lisa discussing a children’s book that Marge realizes is filled with racist stereotypes. Suddenly, Lisa breaks the fourth wall to address the audience directly. “Something that started decades ago and was applauded and inoffensive is now politically incorrect,” Lisa says, by way of summation. “What can you do?” Marge then chimes in to add, “Some things will be dealt with at a later date,” to which Lisa says, ominously, “if at all.”

The moment was an indirectly direct response to comedian Hari Kondabolu’s 2017 documentary The Problem With Apu — and many saw the episode’s message about changing tides of “political correctness” as a lazy way of dismissing the critiques leveled by Kondabolu’s doc.

The Problem With Apu uses the Simpsons character of Apu to examine South Asian representation in entertainment. And Apu, as the documentary lays out, is undeniably problematic: The character is an Indian-American resident of Springfield voiced by white comedian Hank Azaria — who does an Indian accent that, as Kondabolu notes, is part of a tradition of “brownface” by other white actors who have played Indian or South Asian characters.

Kondabolu, who has always identified himself as a Simpsons fan despite his issues with the character of Apu, indicated his disappointment with the sitcom’s response on Monday, tweeting about the show’s apparent brush-off of his critique. In a later tweet he said that the show’s response was “not a jab at me, but at what many of us consider progress.”

In a piece for NPR on Monday, critic Linda Holmes wrote that Sunday night’s episode reduced Lisa to “a mouthpiece for the lazy idea that asking for better representation is an unfair burden on creators; an unreasonable demand that things be ‘politically correct.’” As Holmes put it, what was missing from the show’s response was “any recognition of the effects on the people who find themselves not represented, or represented poorly.”

On Twitter, Village Voice film critic Alan Scherstuhl pointed out that, in eye-rolling at young people and their demands for “political correctness,” The Simpsons — a steady source of clever social commentary in its heyday — had come around to be “just as fuddy-duddy clueless” as former president George H.W. Bush. (In a 1992 speech Bush famously said that Americans should be “more like the Waltons and a lot less like the Simpsons.”)

Television critic Vikram Murthi (who has contributed to Mic in the past), a Simpsons superfan who is himself South Asian, agreed that the show’s response to critiques of the character of Apu was disappointing. “It’s just really lazy,” Murthi said in a phone call on Tuesday.

“I understand why Hari Kondabolu, who made this whole documentary about the problem, is offended by [the response]. For me, it’s just a really lazy way to not engage.” Murthi said that his first thought when he saw the clip from Sunday night’s episode was that it would have been “so much better” for the show to not address the criticism at all. “That’s also a problem, but it would have been much better than putting this weird, buck-passing statement in the voice of Lisa.”

But for Murthi, the character of Apu is complicated by the fact that he sees Apu as both a racist caricature and a full-fledged character, who is lent both nuance and humanity over the course of the show. “The problem with Apu for me has always been that it’s Hank Azaria doing the voice. Hank Azaria is an incredibly talented, brilliant comic ... but at the end of the day, it’s a white guy doing a stereotypically Indian accent.”

Despite the fact that a lot of “superficialities” of the character of Apu are stereotypes — his accent, his convenience-store job — the show has, in Murthi’s estimation, given Apu “an inner life and an outer life of his own.” To Murthi, Apu’s character is “indicative of a certain immigrant story.” And Apu’s backstory — that he immigrated to the U.S. to follow his dreams but fell into a service job, forced into a different life than the one he imagined because of an indifferent system — isn’t “inherently stereotypical,” Murthi said.

“Yes, the actual performance, I do believe, is offensive,” Murthi said. “Because it’s, again, just a white guy doing an Indian accent. But the character himself is often used to poke fun of or expose the other Springfieldians’ bigotry.” To Murthi, the social media conversation surrounding the Simpsons’ response to The Problem With Apu has lacked nuance — on all sides.

“Everything becomes reduced on the internet, it becomes like, ‘This is bad,’ and ‘No, you’re bad for saying this is bad.’ ... I think that, on the internet, it becomes a lot easier to just rely on easy answers to further your point. I think it’s done out of a sense of genuine good; the people who are doing that are like, ‘It’s offensive, it’s wrong and we should stop it.’ But I think it also robs the larger conversation of multiple shades.”

Vox TV critic Todd VanDerWerff, who has called the series his “favorite show ever,” said in a phone call on Monday that he was at least a little bit surprised at the show’s defensive response to The Problem With Apu. “Apu is a racist caricature, but they’ve always been careful to underline his humanity, so I guess I thought they’d be more troubled by [this criticism],” VanDerWerff said. “While I understand that they couldn’t radically change the character, or retire the character or suddenly cast a new actor this late in their run, I think it is kind of weird that their response was, ‘Why are we having this conversation?’”

And what about using Lisa to deliver the line shrugging off complaints about political correctness? VanDerWerff said that it wasn’t out of character for Lisa to deliver the moral message of the episode — that’s a role she often fills in the series. But in this episode specifically, “you’d think that Lisa would be on the side of well-meaning white liberals who think that this is a problem but aren’t sure how to solve it. So in that sense it was a little strange.”

According to VanDerWerff, Sunday’s episode didn’t mark the first time that The Simpsons has responded to criticism of Apu — they’ve done it before, and handled it much better. “They had done an episode where they specifically contrasted Apu’s character against a new character they had brought in, his nephew, who was raised in America and was voiced by an Indian-American comedian [Utkarsh Ambudkar],” VanDerWerff said. “That episode was really probing about the question of ‘Is this OK?’ ... That was an interesting dissection of the problem that I wish they had had more of in [Sunday] night’s episode.”

VanDerWerff said he thought Sunday’s episode was at least somewhat self-aware — a more generous reading than other critics have offered — but he suggested that the show would have been better served by confronting the issue directly. “I think if they had gone in and and done a story about how they’re aware that this is a problem ... I think they’d get a lot more leeway from even some of their harshest critics,” VanDerWerff said. “But it’s safe to say that this was not that.”

Murthi also offered that there were plenty of ways the show could have acknowledged the problematic aspects of Apu’s character without throwing up its hands and blaming oversensitivity. The long-running show has instituted changes before: “Characters have died, people have changed,” Murthi said, and it wouldn’t have been very hard to come up with a solution to the problem with Apu.

“Which is why their response is disappointing. You could do anything, and this is what you chose to do,” Murthi said. “You don’t have to retire the character. You can update him, you can put a new spin on it, you can do something to address the fact that times have changed.”