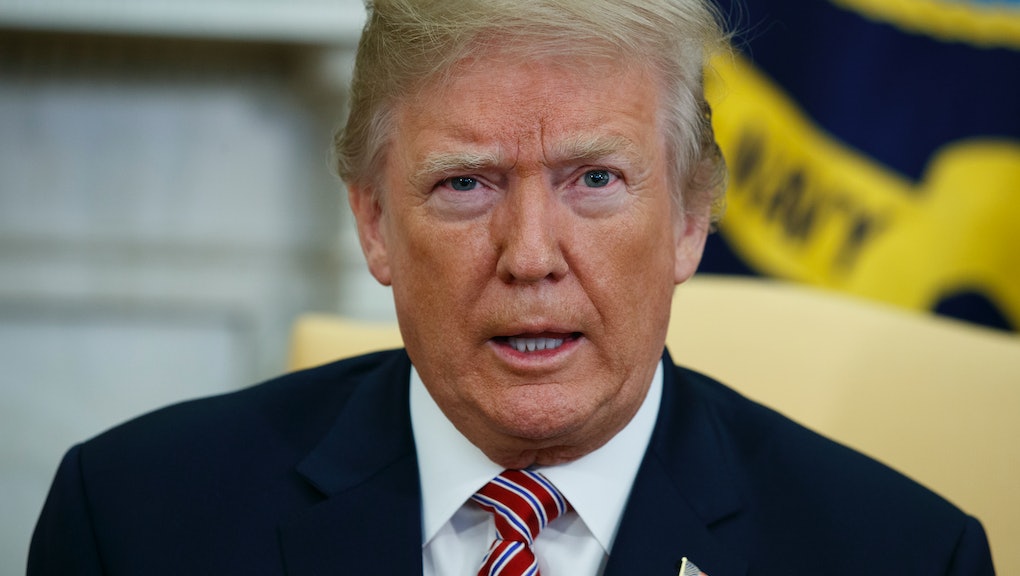 White House: Trump “believes he has the power” to fire Mueller

Sarah Huckabee Sanders said Tuesday that the White House has been told that President Donald Trump has the authority to fire Robert Mueller, suggesting talks about terminating the special counsel have taken place.

“We’ve been advised that the president certainly has the power to make that decision,” press secretary Sanders said during a daily press briefing with reporters Tuesday afternoon, citing “a number of individuals in the legal community ... including at the Department of Justice.”

Sanders comments came a day after the FBI conducted a raid on Trump’s longtime attorney, Michael Cohen — a stunning move that the president slammed as an “attack on our country.”

He has described the raid as being part of a “witch hunt” against him, and in comments to reporters Monday left the door open to the possibility of terminating Mueller — something Democrats and even some Republicans have warned could be political “suicide.”

“Many people have said, ‘You should fire him,’” Trump told reporters Monday. “So we’ll see what happens.”

Sanders was asked Tuesday if Trump sees axing Mueller as being within his authority.

“He certainly believes he has the power to do so,” Sanders said.

Asked if he was considering it, she referred reporters back to the president’s vague comments from Monday.

Trump has reportedly attempted to fire Mueller once before. According to the New York Times in January, Trump ordered the special counsel’s termination, but White House counsel Don McGahn threatened to quit rather than carry out the directive and the president relented.

Deputy attorney general Rod Rosenstein, who oversees the Mueller probe, is widely considered to be the only person with the legal authority to fire the special counsel. He has repeatedly indicated that he sees no just cause for Mueller to be fired.

Sanders declined to say whether the raid would impact Trump’s decision to sit for an interview with Mueller. She also declined to discuss the future of Attorney General Jeff Sessions, Rosenstein and FBI director Christopher Wray.

“The president has voiced his frustration with the situation,” she said.

In his rambling comments on Monday, Trump once again singled out Sessions, who had recused himself from matters related to the Russia investigation in early 2017.

“The attorney general made a terrible mistake when he did this,” Trump said.

The FBI raided Cohen’s hotel and office Monday under referral from the special counsel and seized records, tax documents and communications from the longtime Trump attorney — including documents related to the $130,000 hush payment to adult film actress Stormy Daniels, who allegedly had an affair with Trump.

She did not say if Trump had spoken with Rosenstein, Sessions or Cohen since the raid Monday, but she did reiterate the president’s position that the move was an overstep.

“[Trump] thinks this has gone too far,” Sanders said.

The press briefing Tuesday also became testy at times as Sanders fielded questions about the raid, along with Trump’s response to the latest alleged chemical attack in Syria and the future of embattled Environmental Protection Agency director Scott Pruitt.

In one contentious exchange, reporter April Ryan asked Sanders if Trump had “at any time thought about stepping down.”

“No,” Sanders said, “and I think that’s an absolutely ridiculous question.”