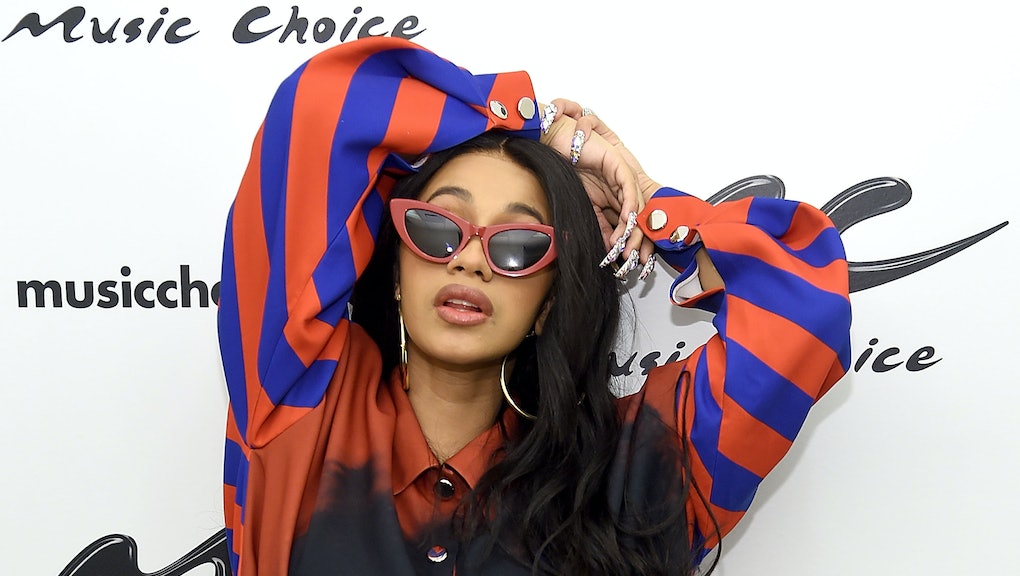 Cardi B is helping redefine what it means to be a working, pregnant black woman

Rapper Cardi B — who went from Love & Hip Hop sensation to chart-topping hip-hop phenomenon in 2017 — celebrated two major milestones last week. On Friday, she dropped her ineluctable debut album Invasion of Privacy, and on Saturday, she revealed during a Saturday Night Live taping that she’s expecting a baby with her fiancé Offset, of the rap trio Migos.

“I’m finally free!” she exclaimed in a video captured after her performance.

Supporters, like Rihanna and Erykah Badu, took to Instagram to congratulate “Binderella” — a self-given nickname Cardi raps on her new record. But according to the mother-to-be, since sharing the happy news, others have tried to dampen her fairytale-come-true by criticizing her decision to have a baby at all.

Cardi also questioned the notion — submitted by her critics, purportedly — that she can’t make money moves while transitioning into motherhood.

“So many were talking about, ‘I feel bad for her. Why she’s doing that in the height of her career?’ And it’s just like, why can’t I have both right now?... Like, why do I have to choose a baby or career?”

Monica Simpson, executive director of Sister Song, a national women of color-led reproductive justice collective, said the policing of Cardi B’s right to give birth at this point in her career is rooted in a long history of taking away black women’s bodily autonomy.

“It’s almost like black women are damned if you do, damned if you don’t,” Simpson said. “And what it speaks back to is this deeper history. There’s been so much control of our bodies, of our sexuality, of our labor within this white supremacist, patriarchal system that we live in in this country.”

North Carolina’s eugenics program is an example of this history. State government officials in the early 1960s targeted black women for forced or coerced sterilizations as the number of black Americans receiving welfare increased. Between 1929 and 1973, black women accounted for 39% of North Carolina’s sterilizations. In the 1960s — at the height of the program — that figure was 60%.

In Mississippi, the late civil rights activist Fannie Lou Hamer said she was sterilized without her knowledge or consent in 1961. In 1964, Hamer claimed that “six out of the 10 Negro women” who went to the state’s North Sunflower County Hospital were also victims of sterilization abuse.

All told, black women in the United States have been speaking out about their sexual and reproductive abuse or coercion since slavery. Abolitionist Harriet Jacobs, who was repeatedly raped by her slave master and later was freed, vividly detailed her experiences in her 1861 book, Incidents in the Life of a Slave Girl.

Simpson added that Cardi’s story aligns uncannily with the concerns of the radical reproductive justice movement, which was created by black women activists in 1994 to incorporate issues including racism, poverty and violence into broader conversations about reproductive rights. The movement advocates for the right to give birth, the right to not have children and the right to raise them in a safe environment.

“Cardi B is reproductive justice personified,” Simpson said. “She’s definitely sitting in a place of privilege right now, because she’s been able to acquire this new wealth and this new notoriety and fame. [But] that doesn’t mean that her story and her journey to get there doesn’t allow her to resonate with those of us who ain’t millionaires because she definitely has a story that connects to us.”

While living in the South Bronx of New York City, Cardi B overcame her own impoverished conditions and escaped domestic violence by dancing at a strip club, a job that allowed her to support herself, from the age of 19 to 23. In a July 2015 interview with Revolt, Cardi showed viewers around her “dangerous” apartment building.

“I’m so fortunate and I’m so grateful that I get to get the fuck outta here. But then again, I feel so bad that there’s actually families that live here and it’s so disgusting,” she explained in the video.

She also expressed her desire to raise her future children in a better environment.

“At the age of 25, I’m expecting to have a kid, maybe 26. You think I want to raise my fucking kid here in the Bronx? You know how my kids are going to be? Worse than me.”

Cardi, who is now 25, is now empowered to live the life she’s always dreamed, while also helping redefine what it means to be a black woman working while pregnant. Black women in popular culture have made something of a habit of this recently. Serena Williams won the Australian Open while 20 weeks pregnant, and later detailed her post-pregnancy health scare with Vogue. Beyoncé memorably celebrated black motherhood during her 2017 Grammy performance by performing while visibly pregnant.

“People like Serena, Cardi and Beyoncé are changing the narrative,” Simpson said. “They’re shifting the way that people are perceiving black women and they’re helping people see us for who we really are.”

In the popular imagination, black women are perceived as more promiscuous, taking more sexual risks and being generally worse-equipped mothers than white women, according to a 2016 Psychology of Women Quarterly study. This means broader representation in moments like these are important contributions to the work Simpson and other advocates are doing in the reproductive justice space.

“I think that we need that representation right now to keep going and I’m appreciating them for doing it even while they still have to keep doing the work that they’re doing,” Simpson said.