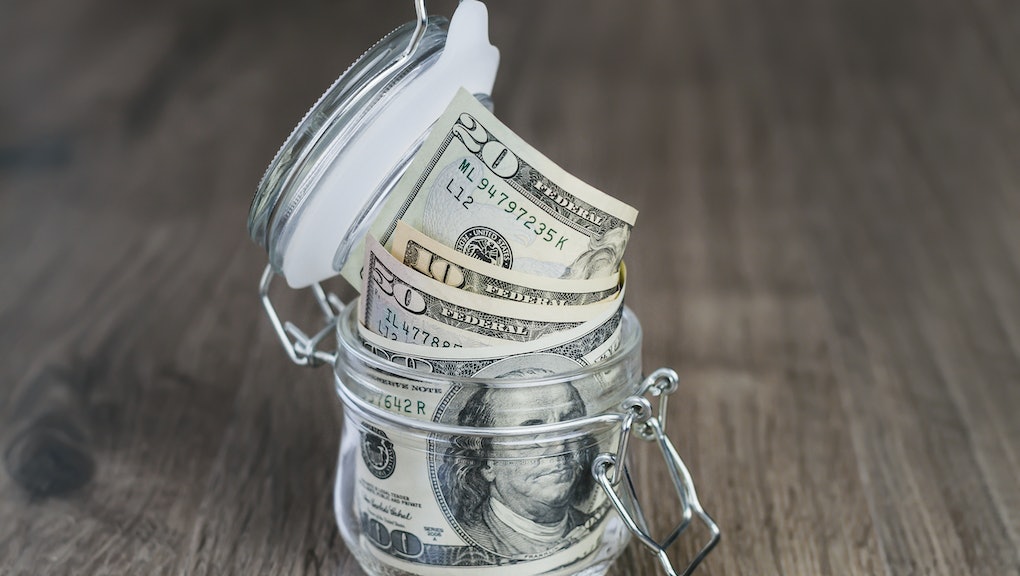 Is your summer vacation fund looking a little sparse? Sure, we all start out the year with big aspirations to trim spending and stop ordering Seamless every other night, but the winter’s long and delivery is too easy. Problem is, July’s around the corner and you’re still a few hundred bucks short for that summer share. Time for a spending freeze.

The premise of a spending freeze is pretty simple: Stop buying stuff you don’t need for a given period of time.

The concept sounds pretty easy, but separating needs from wants is a whole lot easier said than done. “Everyone knows how to save money. It’s a pretty simple concept: Spend less than you earn,” J. Money, a veteran personal finance blogger who’s been writing about his money experiences at Budgets Are Sexy for more than a decade, said in a phone interview. “But actually taking action and changing patterns in your life, is harder. When you... do some of these crazy challenges, you have to make conscious decisions.”

Trying your hand at a spending freeze gives you the opportunity to drastically re-examine your habits, J. Money said. The idea is that it really is hard to choose between your morning latte and your morning avocado toast — but by doing without both for a whole month, you’ll have a much clearer sense of which is actually important to you.

So whether you’re looking to come up with some extra cash or hoping to re-examine your relationship with money, a spending freeze can be a way to accomplish both — if you can stick to it, that is. Here are some best practices for setting one up.

To start, you want to set yourself up with some rules, ie: how long is your freeze going to last and what are you actually going to give up? Though they may respect your motives, your landlord isn’t likely to let you skip a month’s rent. Ditto goes for most of your fixed expenses, like utilities or insurance. You’ve obviously gotta eat.

In setting up his first spending freeze, J. Money stopped buying lottery tickets, gadgets, furniture and anything he found on his favorite deal sites. For him, this also meant a whole month without any beers at the bar. The personal finance blogger Cait Flanders, who notably tried to go two years without shopping created a similar list before writing The Year of Less: No more shoes, electronics, home ware, or books.

That said, spending freezes usually come with a few caveats. Though he didn’t technically need them, J. Money also allowed himself himself to spend money on investments and magazines, logical concessions for a personal finance blogger. He obviously didn’t stop eating, though he did stop dining out.

What you allow yourself also depends on how long your spending freeze will last. For her long spending freeze, Flanders allowed herself to spend money on gifts for other people, for example. New clothes were also allowed, she wrote in a post mortem, if they were truly needed or in tandem with a public appearance or her book tour.

Speaking of friends, it’s a good idea to consider getting one to participate in your freeze with you. It helps if there’s someone else skipping out on your group’s regular happy hours, J Money said, and having a buddy can also help you stay more accountable. He also recommended telling people about your plans, both because they’ll want to know why you’re skipping out on a month’s worth of happy hours and because telling people about your plan may help you be more accountable.

It’s also a good idea to write down everything you’re spending money on. Seeing all your expenses laid out may call attention to some areas where you can cut back without sacrificing any quality of life — for J. Money it was the a la carte songs he was buying on iTunes at 99 cents a pop.

Writing about, or journaling your spending freeze may also help you realize the “whys” behind your impulse spending, as the blogger Robert Murphy put it in a popular post on LifeHacker. Tracking his spending and his emotions at the same time, he wrote, made him realize that a lot of his reckless spending had some sort of trigger. When he was feeling bored about his home life, for example, was when he tended to shop for cooking equipment. When he was feeling stuck, he tended to shop for vacations.

“It’s all about being aware and then choosing based on your priorities,” he said. If traveling is your passion, for example, then spending money on that may be a worthy investment. On the other hand, spending money on several sun hats in anticipation of your next cruise isn’t helping anyone.

Give yourself a reward — and cut yourself some slack

A final point to keep in mind: Set out with the assumption that you’ll slip once or twice. For J. Money, the exception was when his five-year-old asked to go to a boat show. For the person attempting a no-spend month in May, that exception may be Mother’s Day.

“The first week I slipped up probably two or three times, but I got better at catching [myself],” J. Money admitted. “Assume you’re going to fail, but keep going to get to the end.”

Consider giving yourself a reward at the end. As you might expect, Cait Flanders was ready for a shopping spree after two full years of severely restricting her spending, according to a post. She used her newfound freedom (and savings) to stock up on camping equipment and a new living room.

“Assume you’re going to fail, but keep going to get to the end.”

“The difference between the way I used to shop and the way I shopped for these things is that now I wait until I have genuinely felt the need for it,” Flanders wrote.

In fact, giving yourself a clear reward might also help you stay motivated, particularly if you give yourself some sort of visual cue — maybe a picture of that new couch — to remind you of what all of this is supposed to be working toward in the first place.

And who knows, after a month without Seamless and avocado toast, you may realize you didn’t need them that much in the first place.