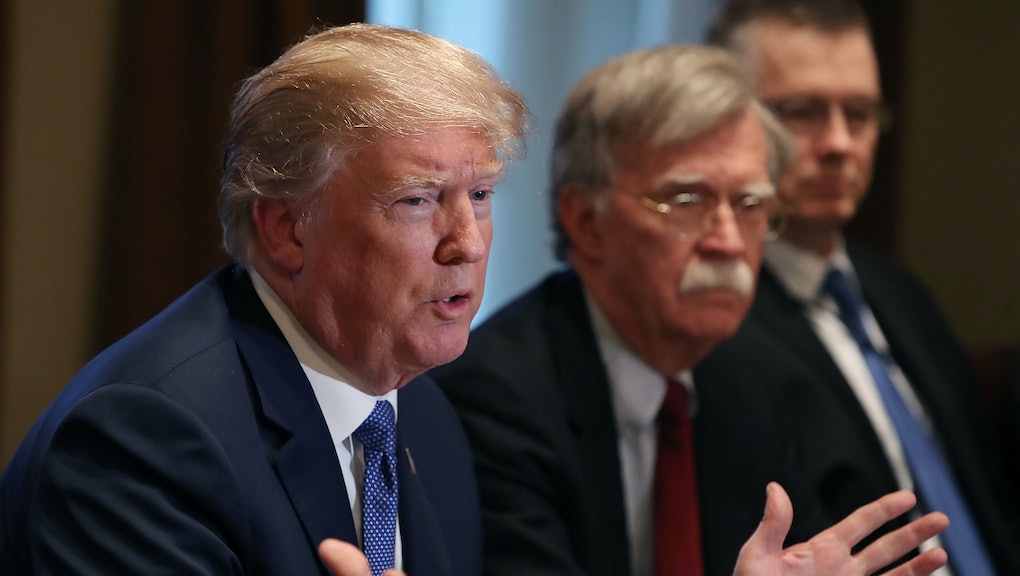 Trump backtracks on imminent Syria threat as US weighs its options

President Donald Trump on Thursday seemingly attempted to backtrack on his suggestion that an attack on Syria was imminent, tweeting that a missile strike on Syrian President Bashar al-Assad’s forces “could be very soon or not so soon at all!”

A day earlier Trump tweeted that he would be launching “nice and new and ‘smart’” missiles at Syria in response to the government’s latest suspected chemical attack in rebel-held Douma on Saturday, which left dozens dead.

Russia, an ally of the Assad regime, had threatened to shoot down any United States missiles in Syria, claiming that it would view such a strike as a war crime.

“Get ready Russia,” Trump tweeted Wednesday, “because they will be coming.”

“You shouldn’t be partners with a Gas Killing Animal who kills his people and enjoys it!” the president added.

The exchange seemed to raise the specter of military conflict between the United States and Russia. The threat Wednesday also reportedly took the Pentagon by surprise, and opened Trump up to accusations of hypocrisy over his past criticism of former President Barack Obama for “broadcasting when we are going to attack Syria.”

“Why can’t we just be quiet and, if we attack at all, catch them by surprise?” Trump tweeted in 2013.

The president’s tweet Thursday seemed to be a response to that criticism.

“Never said when an attack on Syria would take place,” he wrote.

Trump’s next move on Syria unclear

The White House on Wednesday offered little explanation for Trump’s tweet on Russia and Syria, but said that “final decisions haven’t been made yet” regarding a potential strike.

“The president has a number of options at his disposal, and all of those options remain on the table, and we’re continuing to look at each one of them,” press secretary Sarah Huckabee Sanders told reporters Wednesday.

It’s not exactly clear what those options are, though.

Trump launched a strike on the Syrian government in April 2017, in response to a gas attack — but that didn’t seem to deter Assad from allegedly using chemical weapons again.

Trump may order a more expansive military campaign against Assad, according to the New York Times, but it’s not clear how effective that response would be and Trump has been wary of long-term engagement in Syria. Such a response could also further escalate U.S. tensions with Russia and Iran, according to the Times.

Sanders on Wednesday suggested in her press briefing that diplomacy remains an option, but Trump seemed to indicate that the U.S. would not be taking that route in his tweets, which reportedly came before America’s Western allies had decided on a response to Assad’s alleged chemical attack.

British Prime Minister Theresa May called a meeting with her cabinet Thursday to discuss a potential United Kingdom strike on the Syrian government, according to reports. May said Wednesday that Assad appeared responsible for the brutal attack and that “the use of chemical weapons cannot go unchallenged.”

French President Emmanuel Macron has said he has “proof” Assad conducted the chemical attack and that France will decide whether to join a military campaign in “due course.”

The U.S. is “still assessing” intelligence to determine if Assad did conduct a chemical attack, U.S. Secretary of Defense James Mattis said Wednesday. Both the Syrian government and Russia have denied the chemical attack took place.

Trump had indicated on Monday that the U.S. would make a decision in 24 to 48 hours, but by Thursday morning, the nature of the U.S. response remained unclear.

Mattis on Wednesday indicated that the Pentagon was prepared to conduct a strike if Trump directed him to do so.

“We stand ready to provide military options if they are appropriate as the president determines,” Mattis said.