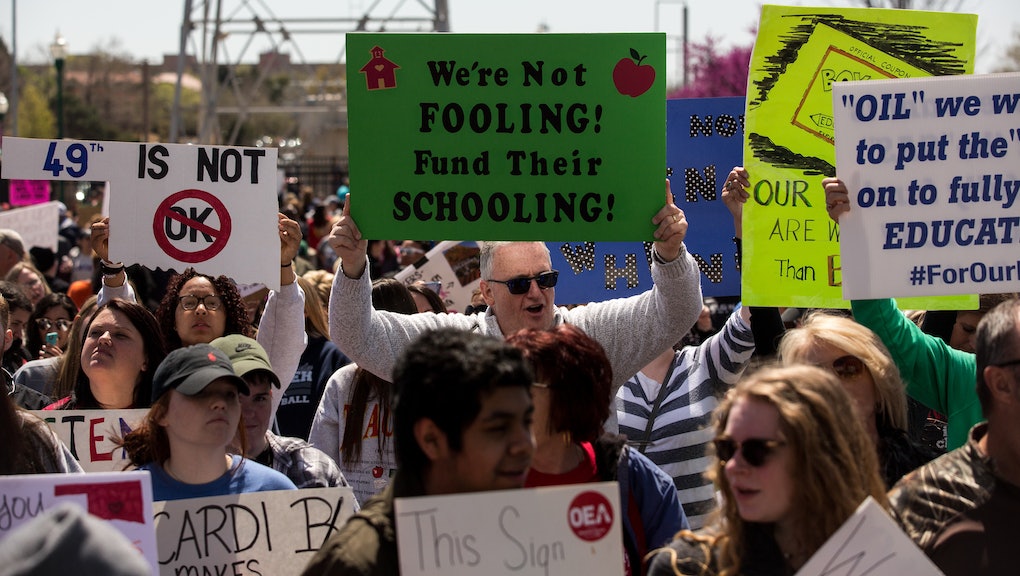 Kentucky teachers descended on the state Capitol on Friday to demand changes in how one of the poorest states in the nation funds education, joining a chorus of teachers walking out of schools and striking in states across the U.S.

Kentucky educators shut down schools in 30 districts around the state for Friday’s march, which followed a previous rally April 2. The teachers are protesting changes to the pension system and asking for increased education funding. The rally was scheduled to coincide with the state legislature taking up spending bills addressing classroom spending and teachers’ retirement benefits — both of which were included in a state budget Gov. Matt Bevin recently vetoed, according to the Washington Post.

“This should be the most important rally of the entire session,” Patricia Lea Collins, the Head Start and preschool director for the Pike County, Kentucky, school system, told the Associated Press.

The second state to stage a multi-day strike was Oklahoma, which saw thousands of Oklahoma educators rallying for their salaries and increased school funding. From April 4 to April 10, teachers in Tulsa, Oklahoma, even took part in an 110-mile walk to the state Capitol as part of the movement, enduring thunderstorms, snow and earthquakes to fight for their schools.

After nine days of protests, organizers called for an end to the state’s teacher strike Thursday.

“We need to face reality. Despite tens of thousands of people filling the Capitol and spilling out onto the grounds of this Capitol for nine days, we have seen no significant legislative movement since last Friday,” Oklahoma Education Association president Alicia Priest said in a news conference Thursday. “Senate Republicans won’t budge an inch for any more revenue for public education. ... They say they don’t believe Oklahoma students need more funding, and they’re wrong.”

Under threat of a teacher walkout in Arizona, Gov. Doug Ducey announced a plan Thursday that would raise teacher salaries by 20% by 2020.

Teachers in the state had already begun staging brief mass actions as part of a campaign called #RedforEd. On Wednesday, educators from 1,112 Arizona schools took part in an early morning “walk-in,” in which they marched arm-in-arm into schools while wearing red. Though school employees have not yet taken part in a multi-day strike, organizers from Arizona Educators United said they were planning to move forward with a walkout, though no formal date had yet been announced.

In addition to the promised raise, Ducey’s plan would also include a total of $371 million in additional school funding phased in over five years. Ducey’s move does not address all the teachers’ demands, which, as stipulated by Arizona Educators United, including a 20% raise for the 2018-2019 school yearh, among other items.

The fight isn’t over in Oklahoma or Arizona

Though the Oklahoma teachers’ union called for an end to the statewide walkout Thursday, it won’t necessarily bring an end to all teachers’ participation in the strike. Priest said during the news conference Thursday that an internal poll had found that 70% of members were unsure about continuing with the statewide protests. The Washington Post noted, however, that some teachers not affiliated with the OEA are still intending to continue to rally.

“The OEA doesn’t get to decide when I’m finished,” middle school choir teacher Renee Jerden told CNN. “I feel like it’s a cop-out — we have let them win by showing them they can behave however they want and we’ll eventually get tired and go home.”

Observers cited by the Post noted that with the state legislature currently out of session on Friday, it will likely become clear what momentum the movement continues to have on Monday, when lawmakers return to work.

In Arizona, the governor’s statement of intent to raise salaries was primarily met with skepticism by the state’s school employees, who were not yet willing to give up their efforts. Organizers cited by AZ Central said that the governor’s efforts did not change their plans for a potential walkout, and educators expressed concern that the governor’s plans didn’t address all their demands and may ultimately not even go through as planned.

“This has raised more questions for us than answers,” AEU organizer and Arizona teacher Noah Karvelis said in a video released by the AEU. “We don’t know the details. We don’t know the funding sources.”

“To me right now, it feels like this was essentially an attempt to stop whatever actions we may have been taking, instead of a legitimate groundwork for future investment in education and to fulfill our demands,” Karvelis continued.

Lawmakers in the Arizona legislature have also signaled skepticism over both Ducey’s plan and the teachers’ demands. Arizona Democrats responded to Ducey’s plan in a statement Thursday, saying the initiative still had “many unanswered questions.” Other state lawmakers cited by AZ Central on Thursday morning, before the governor’s plan was revealed, speculated that the legislative body would likely be open to a pay raise for teachers in next year’s budget, but would not acquiesce to teachers’ demands for a 20% raise in the next year.

The situation in both states, then, is far from clearly over.

“While the walkout is ending today, and we’re going back to school, we are not just giving up and going home,” Priest said during the news conference. “This fight is not over just because the school bell will ring once more. We have created a movement, and there is no stopping us.”

The trend of teachers fighting for their rights is extending far past just Oklahoma, Arizona, Kentucky and West Virginia.

The next Southern state to take action may be North Carolina, where teacher salaries ranked 41st in the country as of 2016, according to the National Education Association. The News & Observer noted that state lawmakers have taken aim at educators in recent years, weakening tenure protections and scheduled raises for teachers and failing to restore recession-era education cuts.

The North Carolina Association of Educators has announced a “day of advocacy” for May 16, when the state’s General Assembly reconvenes, and though educators currently haven’t called for a walkout, there is potential that the conflict could escalate.

“Of the states where the conditions seem to be the most favorable for striking, North Carolina ends up at the top of my list,” Michael Hansen, director of the Brown Center on Education Policy at the Brookings Institute, said in an interview. “That does seem like a very real possibility that we could see something escalate in North Carolina.”

Other states where it seems that “more than just idle discussion” may be taking place include Indiana and Kansas, Hansen noted. He added, however, that their not-as-dire conditions, as compared with the states that have already gone on strike, mean that efforts may be less likely to come to fruition.

“At the end of day, it’s not just walking out to advocate for something teachers want,” Teresa Meredith, president of the Indiana State Teachers Association, told the IndyStar said. “You’re walking out because of what your students need.”

In an article for the Brookings Institution, Hansen projected that other Southern states with economic conditions that could be favorable to a strike include Mississippi, Alabama, Idaho, Georgia, New Mexico, South Carolina, and South Dakota.

State legislatures across the country are also taking pre-emptive action by raising teacher salaries before their state’s educators can organize. New Mexico passed a budget measure in March that included the first pay raises for teachers and state workers since 2014. South Dakota lawmakers passed a 1.7% teachers’ raise, and Alabama raised teacher salaries by 2.5%. In Utah, state lawmakers struck a deal to put a question on the November ballot asking about a 10 cent per gallon increase on gas to help fund education.