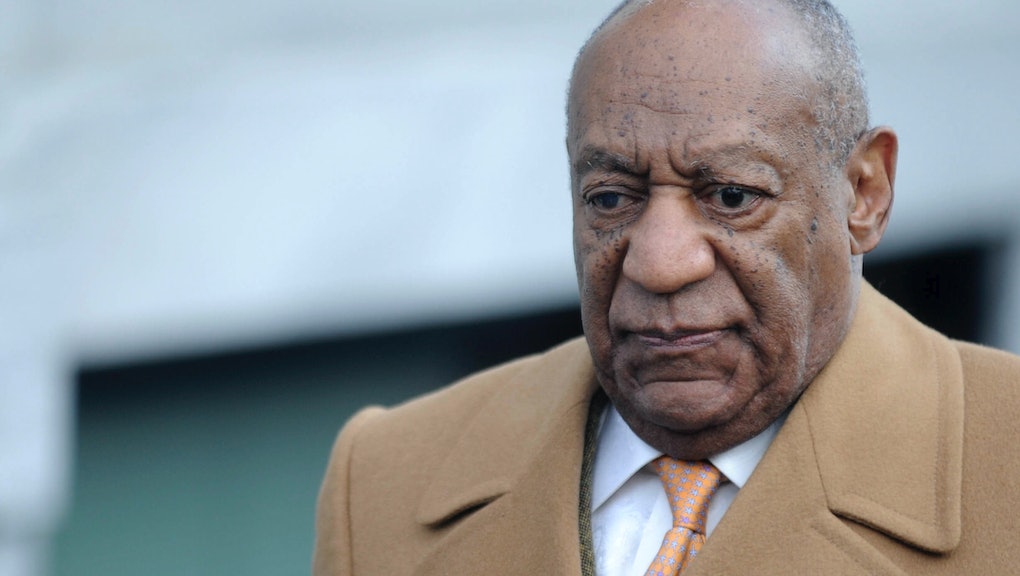 On Friday, Andrea Constand, the main accuser in the sexual assault retrial of Bill Cosby, testified to a jury of seven men and five women that she was drugged by the 80-year-old at his home outside of Philadelphia in 2004.

Constand said that Cosby gave her three blue pills and told her it would “help her take the edge off,” according to the Associated Press. After taking the pills, she said she lost consciousness and woke up to Cosby using his fingers to penetrate her and placing her hand on his penis. Constand added that, in the moment, she “was not able to do anything.”

Cosby is charged with three counts of aggravated sexual assault. He denies the allegations and says the encounter with Constand was consensual. Constand won a civil lawsuit against the comedian in 2006 and was awarded a $3.4 million settlement, an amount the prosecutor revealed to the public for the first time on the first day of retrial. Marguerite Jackson, Constand’s former colleague, is expected to testify that Constand planned to swindle money from Cosby by falsely accusing him.

Constand’s testimony Friday came after five other Cosby accusers — Janice Dickinson, Lise-Lotte Lublin, Heidi Thomas, Janice Baker-Kinney and Chelan Lasha — testified as well. Here is a rundown of what else you missed from the first week of Cosby’s sexual assault retrial.

On Thursday, Janice Dickinson told jurors that Cosby drugged and raped her in 1982.

The model testified that Cosby had invited her to Lake Tahoe, Nevada, promising mentorship regarding her acting and singing career. While at dinner at a hotel, she complained of menstrual cramps and he gave her a blue pill. After Dickinson took the drug, she felt “slightly out of it,” she said, according to the Washington Post.

Cosby then brought her up to his hotel room. Dickinson said she used her Polaroid camera to take photos of Cosby, and not long after, Cosby assaulted her.

“Shortly after I took the pictures and he finished the conversation, he got on top of me,” Dickinson said, according to the report. “His robe opened up ... I couldn’t move.”

Dickinson said she felt vaginal pain and the next morning saw semen between her legs.

On Thursday, Lise-Lotte Lublin took the witness stand after Dickinson. She said Cosby gave her two drinks at his hotel suite in 1989. She said Cosby placed her body so that she was sitting between his knees, Washington Post reports.

Her next memory is of him petting her hair.

Late Wednesday, a third Cosby accuser, Janice Baker-Kinney, who was a 24-year-old bartender in Reno, Nevada, at the time of her encounter with the comedian, told the jury that Cosby gave her two pills at a party in 1982. When she regained consciousness, she was naked in bed. Baker-Kinney said she thinks the pills she took from Cosby were Quaaludes, a now-illegal sedative, according to USA Today.

Chelan Lasha was the second accuser to go before the jury Wednesday afternoon and cried as she described meeting Cosby when she was 17.

When the young, aspiring model and actress went to meet Cosby at his Las Vegas hotel in 1986, she thought the encounter would be for a photoshoot. Lasha said Cosby gave her a blue pill and two shots of amaretto, which he said would help “break up the cough” she had. Similar to other accusers, the pills left her motionless.

“I could barely move,” Lasha said, according to USA Today. “He guided me there, and he laid me in the bed. I couldn’t move anymore after that. He laid next to me, and he kept touching my breast and humping my leg. I remember something warm hitting my leg.”

Cosby’s defense team challenged Lasha’s credibility by bringing up the fact Lasha had made an unrelated false report to Arizona police in 2007.

Heidi Thomas — who testified Tuesday and Wednesday — was the first of five Cosby accusers brought on to give testimony during the retrial.

Thomas told the jury she met Cosby when she was a 24-year-old aspiring actress. He offered her career advice and invited her to a hotel in Reno, Nevada. She said while there, Cosby gave her wine which left her debilitated. Thomas said when she woke up Cosby was “forcing himself in my mouth,” CNN reports.

“I want to see a serial rapist convicted!” Thomas said in the courtroom on Wednesday.

On Wednesday, Cosby’s defense attorney also questioned the legitimacy of Thomas’ plane ticket that purportedly showed she had flown to Reno. The ticket had dates and other information scratched out and altered. Thomas said she assumed someone at the airport scratched the dates on the document.

On Monday morning, before the start of Cosby’s trial, actress Nicolle Rochelle, who played a role on The Cosby Show between 1990 and 1992, staged a protest against Bill Cosby outside the Montgomery County Courthouse.

As the 80-year-old walked up to the courtroom, Rochelle, who was topless and painted her body with slogans such as “Cosby and “Rapist,” charged out in front of him yelling, “Hey, hey, hey,” and “Women’s lives matter!” before police officers detained her.

“The goal was not to attack Cosby in any way or to physically touch him, but I wanted to get slightly close to him so that he could hear the message and be uncomfortable with the truth of that message,” Rochelle told ABC News.

Rochelle was charged with disorderly conduct and ordered not to come back to the area.