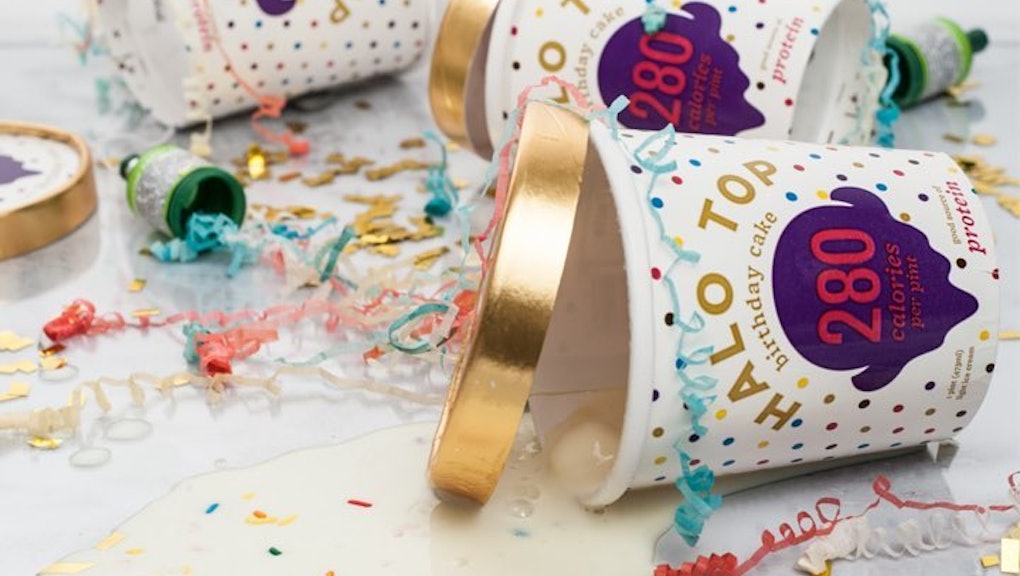 When Ben and Jerry’s and Talenti both announced lower-calorie ice creams in February, I felt a sinking feeling in the pit of my stomach. Ice cream just isn’t fun anymore. Instead, it’s been co-opted to propel a “wellness” trend of guilt-free desserts. The product launches — clear competitive strikes against Halo Top, the most popular pint of ice cream in America — suggest that we haven’t made much progress from the misinformed diet culture that first took off in the 1980s, when heavy-handed marketing insisted that low-fat, low-calorie foods paved the road to success and thinness.

Have we learned nothing? The fat-free craze of the 1980s contributed to Americans’ ever-expanding waistlines. Low-fat pudding, fat-free yogurts and muffins drove consumers to eat more refined sugars and carbohydrates — many void of any real nutritional value — and dub fat the enemy. We’re still collectively recovering, learning about good fats, like the kinds found in avocados and nuts, and less-good fats, like those in animal products and doughnuts. We even learned about how, in the 1960s, the sugar industry paid research scientists to oversell the dangers of fat while downplaying sugar’s role in sickness.

So the obsession with lower-calorie, lower-fat ice cream kind of reeks of a relapse. Halo Top, the low-calorie frozen dessert, gained its cult following by branding its pints as one guilt-free serving. “[Other companies] are trying to capitalize on that movement too because they see that’s what people are going for,” Alissa Rumsey, a registered dietitian nutritionist, said in a phone interview.

These days, it’s refreshing to find an ice cream brand that hasn’t given in to the modern diet trap. When a package of Jeni’s Splendid Ice Creams shipped to the office last week, a sweeping sensation of relief came over me as I read the labels on every new flavor, delighted to find that not one was a “diet” version. When I asked founder Jeni Britton Bauer whether she had plans to follow the lighter paths of Ben and Jerry’s and Talenti, she said “We have no plans to and probably never will.” Why? “We are not interested in following fads,” she said in an email interview. “I am here to make the best possible ice creams we can imagine. Period. That means using whole ingredients — grass-grazed milk, fresh cream and sugar — not stabilizers and emulsifiers, like many of these low-cal varieties have to do, which affects flavor, texture and body.”

Even if you enjoy a scoop of Halo Top or one of its competitors, it objectively tastes different from full fat ice cream. As Britton Bauer put it, “One voluptuous bite is worth more than all of the forgettable ice creams in the world.”

Lower-calorie ice cream brands have mastered the persuasiveness of the health halo effect, by marketing their products as the virtuous choice. Several of Halo Top’s pints pack as little as 240 calories, which is what many conventional ice cream brands offer in a 1/2 cup serving.

The concept of “guilt-free” and “better for you” can lead to an unhealthy relationship with desserts. “One of the big things with these sort of healthier ice creams is that they lead people to think, ‘It’s better for me, so I can eat as much as I want.’ That type of thinking leads to overeating and overriding your body’s feelings of fullness,” Rumsey said.

Instead of sugar, Halo Top and its many competitors rely on ingredients like stevia and sugar alcohol for sweetness, which also reduce the calorie count. But emerging research has found that consuming foods with zero- and low-calorie sweeteners can actually contribute to weight gain and can lead to more sugar cravings. “Often these kinds of desserts aren’t as satisfying as real ice cream,” Rumsey said. “With my clients, they end up continuing to pick up food and graze and find that feeling of satisfaction, whereas had they just eaten the real ice cream, they would have been satisfied and stopped eating.”

Rumsey explained that many of her clients crave more sweets after consuming the low-calorie versions of foods because “they’re getting that sweet taste but their brains aren’t getting any glucose.” Research suggests that while a sweet taste promises calories, the brain makes a call for more energy when lower-calorie and artificially sweetened foods fail to deliver. As Rumsey put it, the impetus to eat artificially sweetened desserts instead of real ones can “completely backfire,” leading to greater calorie consumption.

When consumers pay for pints of “healthy” ice cream, what they’re really buying is the permission to eat mindlessly. They’re also paying for less ice cream: As Food and Wine pointed out, a pint of Halo Top contains 256 grams of ice cream, while a pint of conventional ice cream tends to weigh 400 to 450 grams. “Halo Top is much airier in comparison, partially due to how much less sugar and fat are present,” reported Food and Wine. “Essentially, Halo Top is significantly healthier because you’re eating a [lot] less of the things that make traditional ice cream especially decadent.”

As for mindless eating, for those that have deemed standard ice cream as an “off-limits” food, the opportunity to dive into a pint of an ice cream-like product can be dizzying. With a less-caloric option, “people tend to eat past the point of fullness because [they justify that the products are] low-cal,” Rumsey said. Rather than focusing on the taste or how the product makes your body feel, consumers can zero in on the delight of eating more than they tend to allow themselves. And that’s troubling, said Rumsey: “In the long run, it keeps us from being touch with our body.”