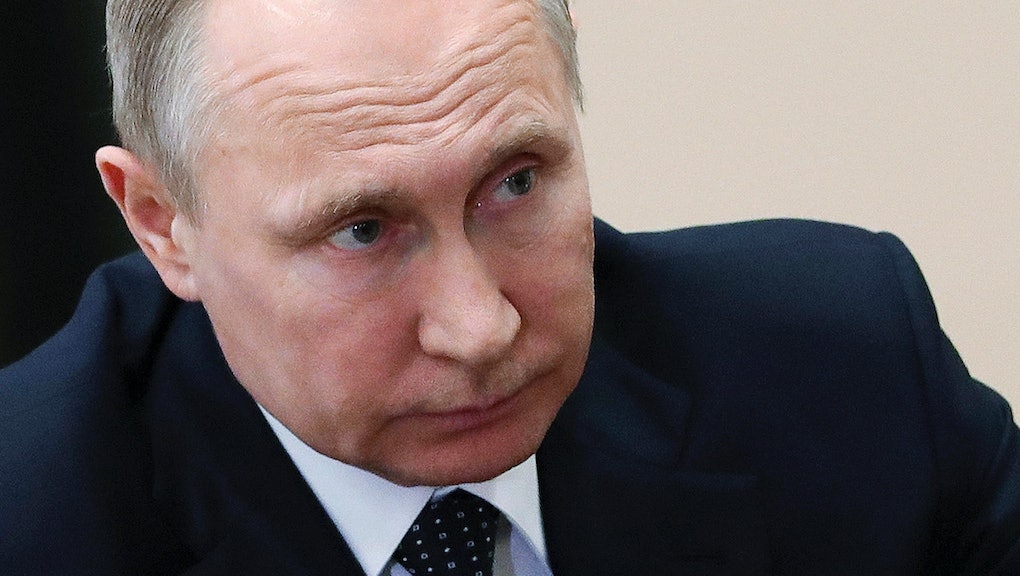 Russian President Vladimir Putin on Saturday railed against the United States-led airstrike on Syria, saying that the move violated the “norms and principles of international law.”

“An act of aggression against a sovereign state that is at the forefront of the fight against terrorism has been committed,” Putin said in a statement.

The condemnation came the morning after the U.S., United Kingdom and France launched a missile strike on targets in Syria in response to Syrian President Bashar Assad’s latest suspected chemical attack.

The Syrian government and Russia, which backs Assad, have denied such a chemical attack took place.

But the U.S. and its allies have expressed confidence that chlorine gas and a nerve agent were used in the April 7 attack, and that Assad’s forces were behind it.

“The disinformation campaign is in full force this morning, but Russia’s desperate attempt at deflection cannot change the facts,” she said in prepared remarks. “A large body of information indicates that the Syrian regime used chemical weapons in Douma on April 7.”

Haley also took aim at Russia’s claim that the United Kingdom helped fake the attacks in order to garner support for the U.S.-led strike.

“The pictures of dead children were not fake news,” Haley said. “They were the result of the Syrian regime’s barbaric inhumanity. And they were the result of the regime’s and Russia’s failure to live up to their international commitment to remove all chemical weapons from Syria. The United States, France and the United Kingdom acted after careful evaluation of the facts.”

The U.S.-led operation struck at the “heart of the chem weapons program” in Syria, the Pentagon said Saturday, and was “double” the strikes the U.S. carried out a year ago in Syria over an earlier Assad chemical attack.

President Donald Trump, who announced the airstrikes Friday night, said the operation was “perfectly executed” and “could not have had a better result.”

But the strikes threaten to deepen the growing conflict between the U.S. and Russia, which threatened earlier in the week to shoot down any U.S. missiles targeting Assad, and effectively turn Syria into a proxy battleground between the two Cold War powers.

Nikki Haley, the U.S. ambassador to the United Nations, blasted Russia Friday for supporting Assad, telling the security council that “if Russia had lived up to its commitment, there would be no chemical weapons in Syria.”

But her Russian counterpart, Vassily Nebenzia, accused the U.S. of using the alleged attack as a pretense to oust Assad and to check Russia’s power, which he told the U.N. security council would be a “breach of international law.”

Trump — who previously warned that there would be a “big price to pay” for backing Assad — called on Russia Friday to “decide if it will continue down this dark path or if it will join with civilized nations as a force for stability and peace.”

“What kind of a nation wants to be associated with the mass murder of innocent men, women and children?” Trump said in his remarks Friday.

“Nations of the world can be judged by the friends they keep. No nation can succeed in the long run by promoting rogue states, brutal tyrants and murderous dictators.”