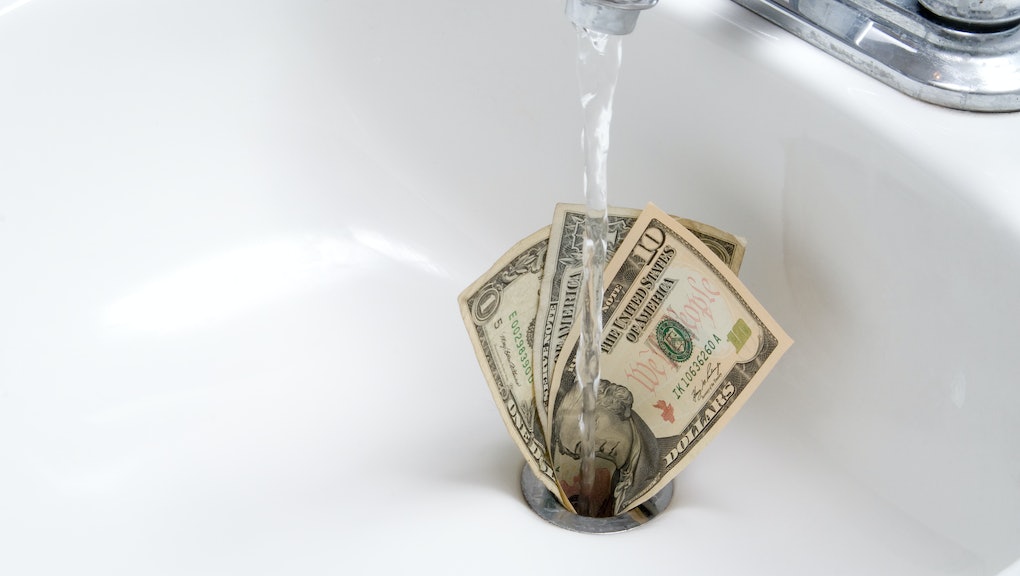 When it comes to spending money, we all have our weaknesses. Maybe you have a hard time declining invitations to that happy hour you can’t actually afford. Or maybe you’re so risk averse with your money that you’re putting off investing and not thinking about long-term wealth.

Most people end up with plenty of financial regrets. About 78% of Americans copped to one of eight common errors ranging from overpaying for a wedding to being caught in an online scam, according to a recent survey of more than 2,000 people from the personal finance site Finder.

By far the most common mistake, Finder found, is spending too much money on dining out, shopping and vacations. That’s not particularly surprising: In a recent Credit Karma survey, nearly 40% of millennials said they spent money they didn’t have on so-called “social spending,” like vacation homes, long weekends and hitting the bar.

Fortunately, overspending on fun is one of the least costly of the mistakes in Finders’ study, and among the easiest to rectify.

Our reasons for splurging are often psychological, and there lots of ways we can trick ourselves into being more careful with our cash: using paper bills, which are more “painful” to part with; breaking out a good, old-fashioned budget; or outsourcing your saving to automated apps that can track your spending.

Some of the other money mistakes are a lot more costly. More than 7% of Americans regret overpaying for their wedding, for example, a figure that’s reflected in the average wedding’s $33,000 price tag. Here are three of the most common money mistakes people make — and what you should do instead.

Letting your partner have total control of the finances

Love and money don’t always mix: 15% of Americans said that having one partner control the finances was their biggest money regret, according to Finder’s numbers.

Of course, the person controlling the purse strings may rightfully think of themselves as a money martyr for tackling the household budget every month. The problem is, having one person control your finances can lead to all sorts of trouble down the road, from neglected retirement savings to secret bank accounts.

Do this instead: When it comes to mixing money, many couples go awry by treating shared finances as an all-or-nothing proposition. Instead, consider migrating money into the same account over time as your shared expenses add up. It’s also a good idea to schedule a low-pressure time to discuss your finances to get ahead of any stressful money scenarios.

Trying to get rich quick with a big investment or purchase

The more money you have, the more likely you are to have made a bad investment, Finder found. Nearly a third of those making more than $300,000 a year said they’d made a bad investment in stocks or property, though it’s also a common problem for middle-income households as well.

There are a few reasons why you may want to take a beat before taking your buddy’s stock or real estate tip.

For one, Americans tend to valorize homeownership and real estate as the ideal investment, when, in reality, it has traditionally done worse in the long haul than other investment products, like stocks. Property isn’t liquid, either, meaning that it’s hard to sell in the event that you need the cash.

Buying individual stocks is also risky, akin to putting all your eggs in one basket. Everyday investors are typically outgunned by pros with access to the latest information and analysis.

Do this instead: When it comes to building your investments, look to diversified assets like index funds, mutual funds or exchange-traded funds that can help you grow your wealth without being too dependent on a single company’s success.

Dropping out of college

Whether your plans are fueled by a Mark Zuckerberg-like fantasy of ditching school to start a billion-dollar company or anxiety over the rising balance of student loans, think twice before dropping out of school. More than 20% of Americans in Finders’ survey cited dropping out of college as their top financial regret.

If you attended a for-profit college that’s been shut down for misconduct, then there may be some support that’s available to you through a closed-school discharge program. And even if you dropped out of an accredited school, there may also be options like student loan forbearance or deferment that can suspend your payments while you finish your degree.

Do this instead: When it comes to picking a school, try to be more practical about whether your degree is likely to pay off in the form of higher earnings. If that seems unlikely, consider switching to a lower-cost program, changing majors or even looking abroad where tuitions often run lower.