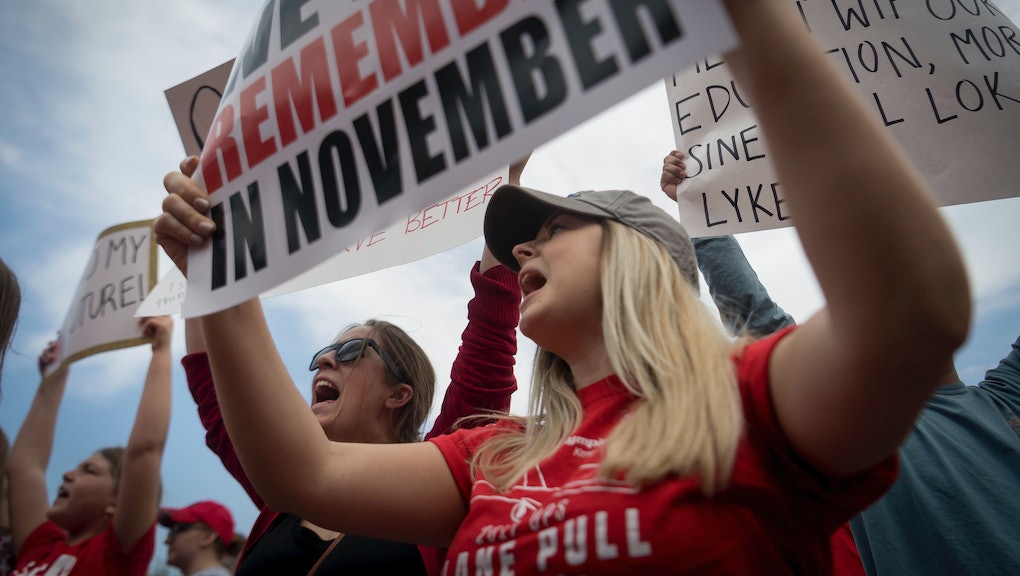 Teachers in red states around the country have been fighting for their livelihoods and for schools in a series of strikes over the past few weeks. Soon, their efforts may be felt not only at rallies, but also at the polls.

The West Virginia teachers strike in March, which ultimately led to a 5% pay raise for educators in the state, has sparked a wave of action across the country. Oklahoma educators brought a strike to an end on April 12, and Kentucky teachers rallied at the state Capitol on Friday for the second time. Meanwhile, Arizona teachers have ignited a #RedforEd movement as momentum toward a walkout continues to grow.

On Monday, Colorado became the latest state to join the teachers movement, as hundreds of teachers rallied at the state house for a Day of Action to lobby for increased school funding. Other states may soon follow suit.

This growing momentum is now going beyond rallies and walkouts. After Republican-led tax cuts resulted in the education shortfalls now under fire, educators are looking to make changes in their state legislatures themselves.

“The power of this activism is contagious,” American Federation of Teachers president Randi Weingarten said in a emailed statement to Mic. “Hopefully, the era of passive resignation is over and this moment will continue through the 2018 election.”

Teachers’ political activism is even going beyond advocacy; in addition to campaigning for pro-education candidates in the November midterm elections, many educators are announcing their own campaigns.

“What we’re seeing is also a phenomenon of more and more educators running for public office, saying, ‘Maybe I should run for the school board, the state legislature. Maybe I should be a person that’s actually sitting there,’” National Education Association president Lily Eskelsen García said in an interview.

“We’ve got plenty of lawyers, we’ve got optometrists, we’ve got business people [in office], and they are making education decisions without our voices. Maybe we should have some folks who say, ‘I know exactly what it’s like to have 39 fifth graders in a classroom,” she added.

How strike action is moving to political advocacy

In the states where walkouts have taken place so far, many educators are seeing their movement transform into political mobilization ahead of the November midterms.

As the Oklahoma walkout came to an end, Oklahoma Education Association president Alicia Priest signaled that the educators’ movement would now pivot toward political advocacy. She called on educators to “work harder than ever to elect education champions who will put students first.”

“We had been meeting legislators for two weeks, the last week of which there was absolutely no change and no movement,” Priest said about the movement’s shift toward political advocacy. “We knew we needed to shift focus. You can beat on a closed door so long that you forget to go to the side of the house and look for an open window.”

“We’re certainly encouraged and proud of the activism and engagement that the entire state took during these last two weeks, and we ask them to continue on this journey to put education at the forefront of everything they think about when they’re going to the ballot box,” Priest added.

As part of the OEA’s efforts, school employees are set to lobby at the state Capitol on education-related bills, while local committees are being established to examine the education positions of local candidates, she noted.

The Oklahoma teachers walkout ended without the same decisive victory as West Virginia, as lawmakers gave teachers modest increases in pay and school funding prior to the strike, but were unwilling to meet their full demands. Advocates of the strike, however, are hopeful that the November elections will spark change.

“A few of their demands were met, and of course that’s a step in the right direction, but the only thing I’m feeling really good about today is that there’s a big election in November where a lot of these legislators will lose their jobs,” Oklahoma parent Sheri Guyse told Reuters.

According to the Oklahoma State Election Board, 482 people filed to run for office on Wednesday, the first day of candidate filing in the state. That marked the most candidates that have filed on the first day since 2000, the board noted. By Thursday, Priest noted that 582 candidates had filed, with more expected to follow.

“Everything about public education is political, and so we must be continuously engaged in the political process. And teachers are lifelong learners. Education may be their wheelhouse, but they will dive in and learn about all the issues beyond education, and all of those issues are connected with education,” Priest told Mic.

Political action has also gotten underway in Kentucky, where the Courier-Journal reported that teachers are mobilizing politically with an eye toward electing pro-education candidates in November.

“What has happened in the last two months has created a new voting bloc that is pro-public education,” Brian Foudray, a high school English teacher in Clark County, Kentucky, told the Journal. “It’s a clarifying event — almost like a lightning strike. And you see everything differently after that.”

In West Virginia, where the teachers’ movement began, education and labor advocates are also continuing their efforts by looking forward to November. Though the Charleston Gazette-Mail reported that state officials and experts are divided over whether the strike will be felt at the polls, some remain hopeful that the momentum will continue, particularly as the state recently experienced another high-profile labor action with a three-week strike from the Communications Workers of America.

The movement is even taking place in states where no organizing has yet occurred. In Texas, public employees are legally barred from striking, and teachers who do so may lose their pensions or teaching certificates. Instead of striking, then, Texas education advocates are urging state educators to take political action instead and make their grievances known at the polls.

“Teachers in Texas aren’t striking because teacher strikes in Texas are illegal and, maybe more importantly, the Texas Legislature is not in session this year. But this is an election year in Texas, and we are urging our members and other educators to do their protesting at the polls,” Clay Robison, spokesman for the Texas State Teachers Association, said in an email to Mic.

The TSTA has created a political action committee and is endorsing pro-education candidates ahead of the November elections, Robison noted. In Texas, teacher salaries are below the national average, and the state has imposed some of the deepest cuts in the country in K-12 spending since 2008, according to the Center on Budget and Policy Priorities.

“The same thing is going on in these other states with teacher strikes,” Robison said about Texas’ education funding problems. “The strikes are calling public attention to this issue, but the real solution is electing pro-public education candidates, people who really will advocate for public schools, not simply pat teachers on the head and congratulate them with lip service.”

Keeping up the momentum ahead of November

With months still to go before the November elections, the question remains of how well educators will be able to keep up the momentum.

“It’s a long time between today and Election Day in November,” University of Louisville political science professor Dewey Clayton told the Courier-Journal. “Summer will come. People will go their own ways ... and then school will start back up. But when it does, one doesn’t know what level of momentum there will be.”

Others, however, are more optimistic. García points to the growing media and public attention about the plight that teachers and schools are facing as something that gives them “hope” there might now be change.

Though some have noted that the teachers strikes are largely nonpartisan — a poll cited by NewsOK found that most Oklahoma teachers are largely Republican — the movement may also benefit from the larger Democratic wave predicted for the midterm elections.

“I don’t think the walkout was partisan in its build-up,” Anna Langthorn, chair of the Oklahoma Democratic Party, told NewsOK. “But I think it has become more partisan every single day as Democrats are the ones who are favorably responding to these teachers.”

In an interview with Mic, Michael Hansen, director of the Brown Center on Education Policy at the Brookings Institute, noted that education is female-dominated.

“I see this is as certainly supportive of that larger narrative around political winds of change that are propelling Democrats forward,” Hansen said about the ongoing strikes. “I think it’s certainly part of a larger context of political involvement for both women and Democrats that finds a lot that’s complementary with the teaching workforce.”