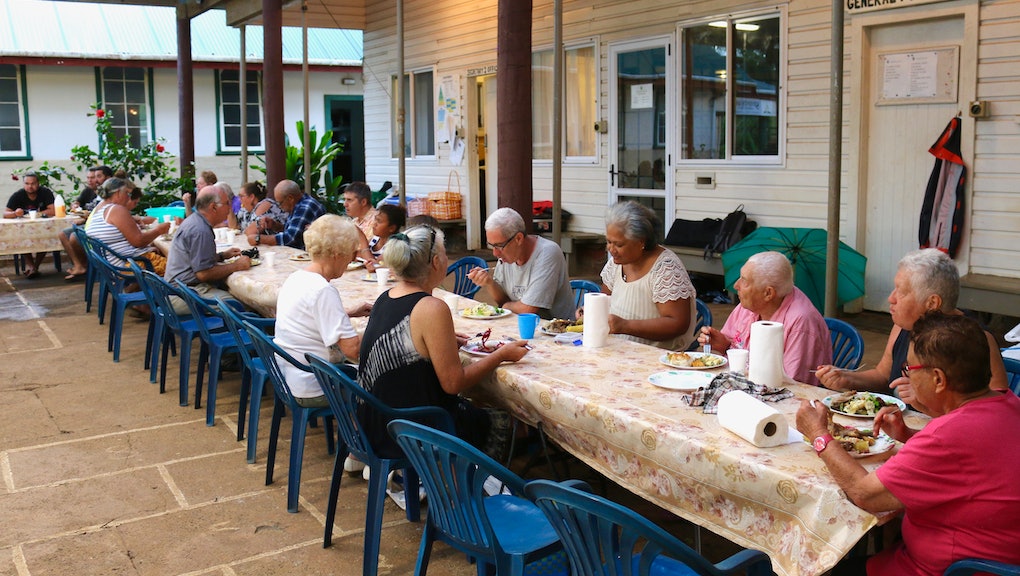 “I haven’t had any fruit in three whole months!” raved Isabel Christian as she plunged her teeth into a purple guava still dangling from the branch. She had just returned to her native Pitcairn after spending three months in New Zealand. “Over there, everyone has to pay for their fruit — here you just get it from the tree.”

At age 9, Christian is currently the youngest inhabitant of Pitcairn — an obscure tropical island in the Pacific around halfway between New Zealand and Peru — and she was genuinely perplexed that one must offer up money in exchange for food.

The main island, which is around the size of New York’s Central Park, has nary a restaurant in sight (there is one resident who sells pizzas from his kitchen on Friday nights) and the single general store stacked full of nonperishables is open a few short hours a week. Meals in Pitcairn are mostly assembled with vegetables from gardens, fruit from the vine and fish from the sea. There’s little need for anything more since the island’s population clocks in at under 50 inhabitants. It’s the smallest country in the world by far; a British overseas territory with a representative democracy (like Bermuda).

The history of the island’s settlement goes back to mutineers including Fletcher Christian (Isabel Christian is part of the ninth generation of inhabitants living on Pitcairn and a direct descendant of his). Fletcher’s tumultuous escape from the British Empire is immortalized in Charles Nordhoff and James Norman Hall’s novel Mutiny on the Bounty, as well as several motion pictures including one starring Marlon Brando. Unhappy with the prospect of returning to their native England, Fletcher and eight fellow mutineers co-opted their vessel, the HMS Bounty, and, with their Tahitian wives and a small band of Tahitian men, set sail in search of an island beyond Polynesia that was only rumored to exist. In January of 1790 they found the legendary Pitcairn, and marooned themselves on the island by setting their ship on fire offshore so they would never be found.

Almost all of the current residents can claim direct lineage to the original mutineers, and modern-day travel to the island still feels very much like an adventure worthy of the Bounty. With terrain too unforgiving to land a commercial plane, and a location too far-flung for a small aircraft to make the journey, the only way to reach Pitcairn is by riding the same freighter that brings the island its cargo: the four annual passages aboard the MV Claymore II, which picks up cargo from New Zealand, then transports passengers from Mangareva, one of French Polynesia’s easternmost islands, for a two-night ride to Pitcairn.

In 2017, the Claymore II brought over the necessary equipment to install a wireless internet system, which revolutionized the island’s communication with the outside world. The first passage of 2018, in February, brought Robin Shackell to shore. I was aboard as well, on a trip organized with assistance from the island council. As the U.K.-appointed deputy governor of the Pitcairn Islands (Pitcairn and three uninhabited islets in the region), Shackell is responsible for liaising with Pitcairn’s leader, Mayor Shawn Christian, Isabel Christian’s uncle, and his council of six additional committee members. (That’s around 15% of the total population if you’re keeping up with the math.)

In honor of Shackell’s four-day foray, the islanders organized a communal dinner on his final evening before the freighter made its return to more populated waters. It’s a common occurrence on the island when an outsider visits for official purposes, and I was lucky enough to crash the party. Traditionally, it’s up to the invitee in question to supply the main dish — steak, lamb or pork brought over fresh from New Zealand or Tahiti is always the top choice since the only red meat available on Pitcairn comes minced in a can.

The Pitcairners gleefully supplied the rest, potluck-style, filling up a long table with a makeshift buffet of appetizers, side dishes, desserts and freshly baked bread. Isabel helped her grandmother Olive Christian haul small bushes of pineapples into the house to mix with rock melon and passionfruit for her famous fruit salad.

Just before sunset, the entire community gathered in the town square: a large slab of concrete sheltered under the aluminum siding that bridges the space between the Seventh-day Adventist church and the wooden structure housing both the treasury and post office. After a tender address from Shackell and a blessing of the food, everyone tucked into the parade of platters with alacrity, wielding their favorite fork and knife from home.

Groups naturally formed throughout the evening — the septuagenarians down at one end of the long table, the younger generation at the other — but everyone came together as the musical instruments and hymnals emerged. In a nod to their mix of British and Tahitian heritage, Pitcairners end their group dinners by belting out traditional chorales with the help of accompanying ukuleles.

“In the Sweet By-and-By” is a local favorite, as is the requisite “We From Pitcairn Island,” the unofficial national anthem. As the only person at the dinner unfamiliar with the lyrics, I was passed a soggy paper copy of the tune, but was instantly overwhelmed by the incredible lack of self-consciousness with which each song was sung — it was like listening to pure joy.

After a few more tunes, the crowd gently dwindled, and at half past nine everyone started to make their way home. There’s no curfew per se, but in an effort to conserve costs, the diesel-powered island cuts its power at 10 p.m. on the dot. On community dinner nights, which happen a few times a year, they splurge and leave it on till 10:15.