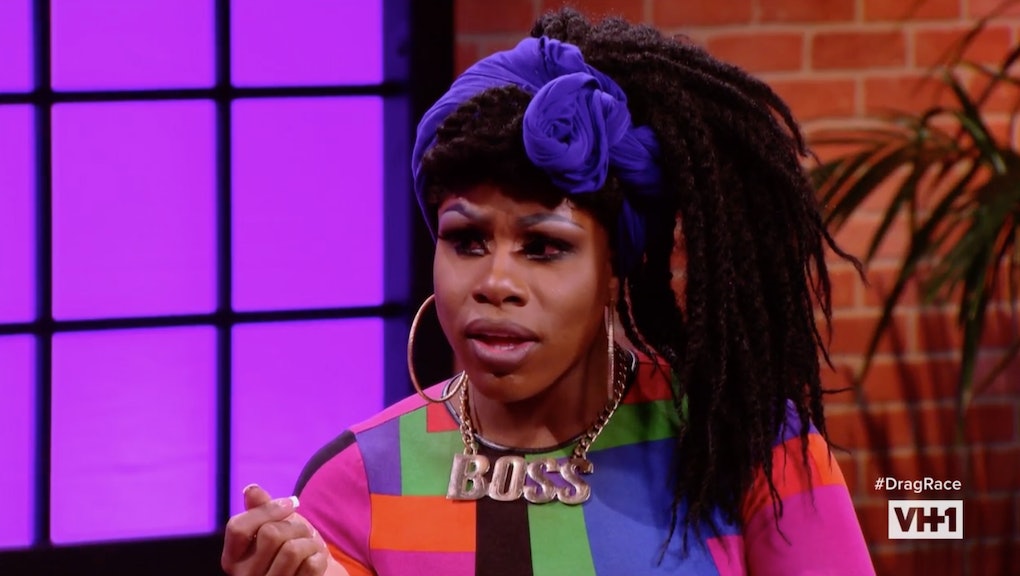 Hello, my flirty little figs. Welcome to Fundamental Reading, the weekly column where we chat about RuPaul’s Drag Race.

Since day one, New York queen Monét X Change has been one of my favorite season 10 competitors, but this episode showed yet again that success outside of Drag Race doesn’t always translate to success on the show. This marked the second week in a row Monét landed in the bottom two, despite her repeated statements about how great she is back home.

Last week, Monét’s craftsmanship in the Last Ball on Earth landed her in the bottom alongside Dusty Ray Bottoms, but a truly phenomenal lip sync saved her marginally less dusty backside. Monét failed to impress the judges yet again this week, but this time around, it was a main challenge she should’ve absolutely slayed: an improv comedy contest modeled after trashy daytime talk shows like Maury or The Jerry Springer Show, with judge Ross Mathews as the host.

For this challenge, The Vixen — who won the cringe-y, military-themed quick-drag mini-challenge — paired Monét and Kameron Michaels together for a sketch in which each queen had a “freaky addiction.” Monét’s character was addicted to eating hip pads, and Kameron’s was addicted to sniffing tucking panties. This should have been a slam dunk, but Monét was strangely muted throughout.

She first came out on stage holding a cake, saying she was the CEO of “Cakes for queens” — a sort of wordplay on “cakes” as slang for booty — but the bit didn’t really go anywhere. Like Michelle Visage said during critiques, I was expecting the cake to have bits of hip pad mixed into it and for Monét to hungrily start glancing toward it on the table next to her. Instead, she just looked morose, only occasionally munching little bits that fell out of her sleeves.

Compared to her scene partner Kameron, Monét fell totally flat — and that’s saying something. Unlike Monét, Kameron isn’t known for being witty with her words or for being a skilled actor. When Kameron had to deliver lines in the “Tap That App” challenge, she was totally one-note. But as a panty-sniffing addict, she killed it, giving the character a manic energy and absurdity Monét should’ve delivered from the start. (In fact, the famously quiet Kameron got maybe her first face-to-cam segment since the season premiere in this episode.)

A few of Monét’s fellow queens — each of whom were paired with their own scene partners — did exceptionally well, highlighting just how forgettable Monét’s performance was. Miz Cracker as Dr. Dill — an anthropomorphized pickle with a Ph.D. — was particularly outstanding, but Eureka as a giant, sexy baby and Monique as a cactus-dating home-wrecker were both close seconds. (Every performance is just as nonsensical in context, I assure you.)

Monét’s lackluster performance coupled with yet another underwhelming look on the “denim and diamonds” runway — more on that below — lander her in the bottom two alongside Mayhem Miller.

In a lip sync to “Man! I Feel Like a Woman” by Shania Twain, who was also a guest judge this week, Monét pulled out all the stops and ended up veering a bit too far off course. Not only did she pull off her voluminous, wavy wig to reveal another one of her trademark pixie cuts underneath, but she also coated herself with two cans of hairspray, whipped out an air guitar and shed her much-critiqued jumpsuit. She couldn’t get it all the way off, though, and had to drag it around by her ankles for a good chunk of the song. It was messy, but you could sense it was mostly out of desperation to stay.

Ultimately, Ru decided Monét was hungry enough to justify keeping her around and sent Mayhem home instead. In a way, Monét’s arc on Drag Race thus far has mirrored that of Trixie Mattel in the early episodes of All Stars 3. Trixie coasted through the first few episodes without much fanfare, but once the competition ramped up to Snatch Game, she fell flat on her face. Escaping elimination by the skin of her teeth was the motivation Trixie needed, and she ended up taking home the crown.

Only time will tell whether Monét will be as lucky.

As usual, Mic will have an exit interview with the eliminated queen. Stay tuned for our chat with Mayhem.

Here’s a quick recap of how each queen did on the runway.

This was the second consecutive week in which Monét sported bigger, more glamorous hair, but it couldn’t save her from a poorly fitting assless je-onesie (jean onesie). It was a great idea in theory, but the execution was a little lacking, particularly in the floppy middle bits that warped as she walked down the runway.

Kameron has consistently proven she’s a strong “lerk” queen, and this week was no different. Here, she wore a jress (jean dress) with a mullet-y, waistcoat silhouette similar to her Martian Extravaganza look. I don’t love her breast plate in this outfit, though: The tone didn’t quite match her face, and it was a bit too shiny and plasticky for my taste.

As the judges noted, this look had the potential to be one of The Vixen’s best, but there was a lack of attention to detail that kept it from being truly jaw-dropping. The silhouette of the mermaid-tail jown (jean gown) was killer, but it was ill-fitting around the middle — nothing that some simple cinching couldn’t have fixed.

This week, Asia sported a one-piece bathing suit, or maybe a short dress with a plunging neckline? It was hard to tell exactly what was going on under those layers and layers of denim fringe. The look was capped off with a floor-length, shoulder-padded jape (jean cape) and some jilettos (jean stilettos). (Help, I can’t stop.)

Aquaria looked like a saloon babe mixed with a medieval bard this week — but in place of a lute or a jug of moonshine, she opted for a jan (jean fan).

This wasn’t Eureka’s best look, not by a long shot, but her jumpsuit (jean jumpsuit — wait, dang) was perfectly fine and fit her well. She described it as a mixture of Honey Boo Boo and Elvis, which is bang-on. I particularly loved the single bouncy curl that dangled down her forehead. It showed an attention to detail beyond the garment itself. Some of her peers this season — oh hi, The Vixen — can’t say the same.

My biggest gripe with Blair is that she’s relied too heavily on an old Hollywood aesthetic, and this week she finally switched things up by infusing her look with some trashy camp. She sported a jatchwork (jean patchwork) skirt and coat made from 15 pairs of jeans, a wig teased for the gods and rhinestone bikini top.

Monique’s denim was represented in a sleeveless joat (jean coat), which she ripped off to reveal a giraffe print — or “brown cow,” as she argued — bodysuit. Down below, she sported thigh-high, jewel-encrusted leggings above a pair of platform heels. I think it was a fun look, but I would’ve appreciated a bit more denim once she took off the coat, mostly so I had some more jortmanteaus to dole out.

I appreciate how Mayhem used pink denim to separate herself from the many shades of blue we saw, but this felt like the equivalent of when Chopped contestants insist they included a key ingredient by using it as a garnish. The pink didn’t read as denim and seemed like it was there merely to check the box. I also don’t think her poofy jleeves (jean sleeves) were particularly flattering.

Miz Cracker looked like an absolute moron tonight — and I loved it. She’s never afraid to look silly, and she does a great job of leaning into the humor of drag without letting craftsmanship fall by the wayside. I do think her arms were a little too bare, though. Needed more jaccessories.