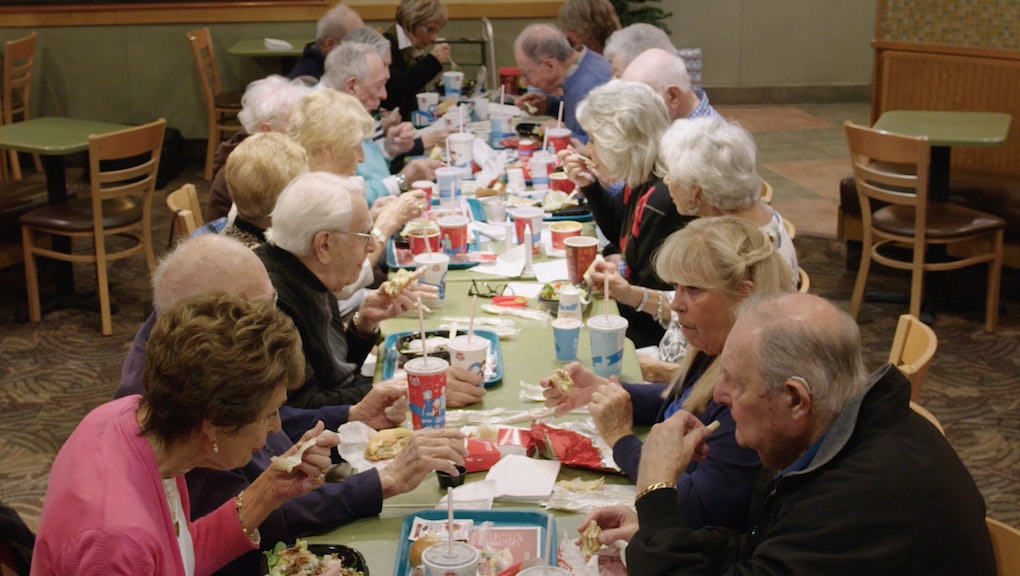 In ‘Wendy’s Shabbat,’ a group of octogenarians celebrate ritual over french fries and Frostys

One lasting tradition recognized by even the most casually observant Jewish person is Friday night Shabbat dinner. There’s really no right or wrong way to go about it: The meal typically involves lit candles, a couple of prayers, comfort food and sometimes wine. Shabbat is really about who you’re eating with. In Palm Desert, California, a group of Jewish seniors have taken liberty with the lax rules to create their own Friday night ritual.

In the short documentary Wendy’s Shabbat, filmmaker Rachel Myers follows her 88-year-old grandmother, Roberta Mahler, as she attends regular Shabbat dinners at a local Wendy’s with many other retirees from her gated Sun City, California, community. The documentary, which premiered Saturday at the Tribeca Film Festival in New York, offers a special glimpse into the beautiful, hilarious and mundane moments of a group of people who find joy while dealing with the hardships of life and loss.

“Am I religious? No, I’m traditional,” Mahler, who might as well be speaking for any Jewish person who’s hesitated at answering the same question, says to the camera. “I can’t imagine being anything but Jewish.”

“It wasn’t really an idea, it kind of just happened,” 79-year-old Sharon Goodman, who helped start the tradition, says in the documentary. “We invited people and they came. We said prayers and people liked it.”

After roughly eight years of these Shabbat dinners, the staff at Wendy’s has come to expect the group, arranging their tables and holding them with a “reserved” sign before the guests arrive. Prior to his death in January, the 97-year-old Rabbi Isaiah Zeldin led the group in prayer over challah bread and grape juice — a typical stand-in for wine — before the seniors put in their orders.

There’s an unspoken thread of mortality throughout the documentary. The Shabbat crew discusses doctors’ visits, loss and living alone. The film itself is an exercise in both celebration and preservation.

“Living by yourself and having a group going to Wendy’s, it gives you a feeling of belonging,” Mahler explains while driving her golf cart in the gated Sun City community. That the setting of the story is a Wendy’s underscores that you can find community just about anywhere.