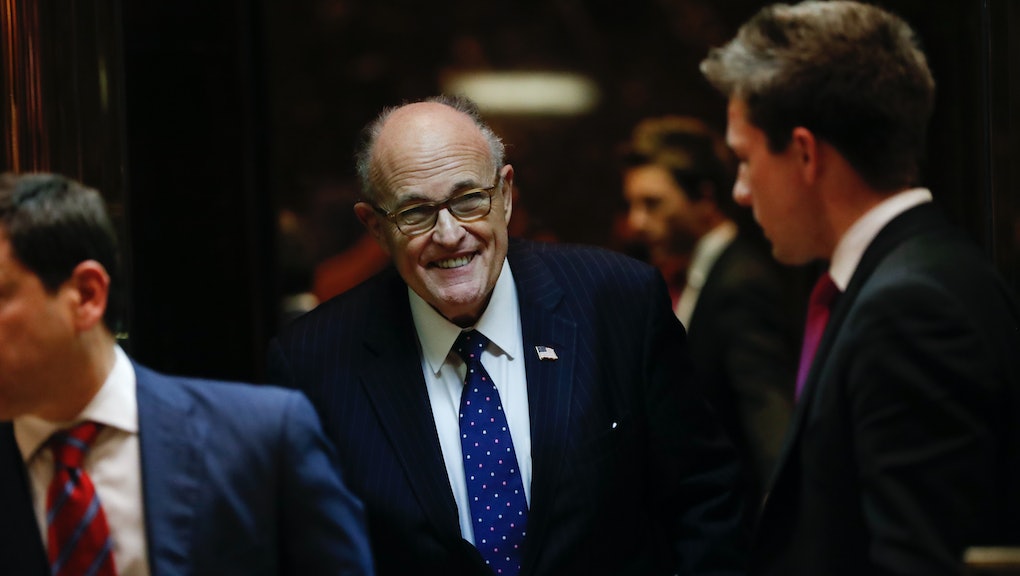 What does the addition of Rudy Giuliani mean for Trump’s legal team?

Giuliani, a fierce ally of the president, may be a household name, but the majority of his legal experience since leaving the U.S. attorney’s office in 1989 appears to be as a consultant rather than a litigator, as the Atlantic’s David Graham pointed out Thursday. Still, the former New York City mayor joined the president’s stable of personal attorneys as an unpaid volunteer with a promise to “negotiate an end to [the Russia probe] for the good of the country,” the Washington Post reported.

This is quite a grand promise — and one that will be difficult to deliver on, given that Mueller has yet to indicate a potential closing of the investigation.

“That, to me, sounds like a mission bound for failure,” Harry Litman, a former U.S. attorney for the Western District of Pennsylvania, said in a phone interview Friday.

Trump’s legal team has reportedly been telling him for months that the end of the Mueller probe is just around the corner — and that it will clear him of any wrongdoing. The president himself has suggested the investigation has already vindicated him.

The Mueller investigation is, in fact, still very much ongoing, and an FBI probe into Cohen could present a new set of legal and political challenges for the president.

A former associate attorney general and U.S. attorney, the Trump loyalist has a strong legal background. But in recent years, he’s been much more visible for his frequent appearances on cable news, where he’s been one of the president’s most ardent defenders.

Giuliani was considered a frontrunner for secretary of state following Trump’s unlikely victory, but withdrew from consideration — or perhaps was snubbed — for the Cabinet position in December 2016.

Still, Giuliani continued to serve as an unofficial adviser to Trump, later becoming the subject of controversy after claiming to have had a role in creating the president’s first travel ban (a nationwide stay of which was upheld by a federal court shortly after its chaotic rollout). After initially saying he advised Trump on the executive order, Giuliani walked back his involvement amid questions of potential conflicts of interest as well as the order’s legality, the latter of which were raised in part by his initial characterization of it as a “Muslim ban.”

This wasn’t the only time Giuliani’s comments on Trump-related matters landed him in hot water. In the days leading up to the 2016 election, he implied in Fox News appearances that he had advance knowledge of the FBI’s reopening of the Hillary Clinton email investigation. Former FBI director James Comey told MSNBC’s Rachel Maddow on Thursday that Giuliani’s remarks sparked a leak probe within the bureau.

So, while Giuliani brings impressive legal experience to the Trump team as a former U.S. attorney for the Southern District of New York, which is leading the Cohen probe, he also comes with significant baggage. Still, Trump has expressed confidence in the former mayor, telling the Post in a statement that Giuliani “wants to get this matter quickly resolved.”

Mueller does appear to be nearing the end of his investigation into possible obstruction of justice on Trump’s part, and the Post reported in early April that Mueller will prepare a report on the president’s conduct since taking office. But an end doesn’t appear to be in sight for the special counsel’s inquiry into potential collusion between the Trump campaign and the Kremlin — and the FBI’s Cohen probe seems to be just getting started.

The addition of husband-and-wife white-collar criminal defense lawyers Jane and Marty Raskin to Trump’s personal legal team Thursday seemed to subtly acknowledge as much. Unlike Giuliani, the former federal prosecutors have more recent courtroom experience — including representing public officials, CNN reported. Such a maneuver could suggest the president and his lawyers are gearing up for a possible legal battle stemming from the investigations.

“If it’s all going to be done in a few weeks, why do you need experienced courtroom attorneys?” Litman, now a lecturer at the UCLA School of Law, said.

Trump, then, appears to be doing two things at the same time. On the surface, he’s conveying the impression that he believes the Russia investigation is winding down — but behind the scenes, he also seems to be lawyering up for a tough legal fight.

The addition of Giuliani and the Raskins is just the latest reshuffling of a legal team that has changed members and strategies on several occasions and has reportedly struggled to attract top legal talent.

The team looks to have shifted to a more aggressive stance toward investigators in recent weeks, and the FBI’s Cohen raid may have strained the already fragile negotiations for a potential Trump-Mueller interview. It has also raised the specter that Trump may be considering firing Mueller or Deputy Attorney General Rod Rosenstein, who oversees the Russia probe.

In comments to the Post, Giuliani said it was “too early” for him to say whether Trump would agree to an interview with federal investigators, but also said he had “high regard” for Mueller and would advise the president to let the investigation play out.