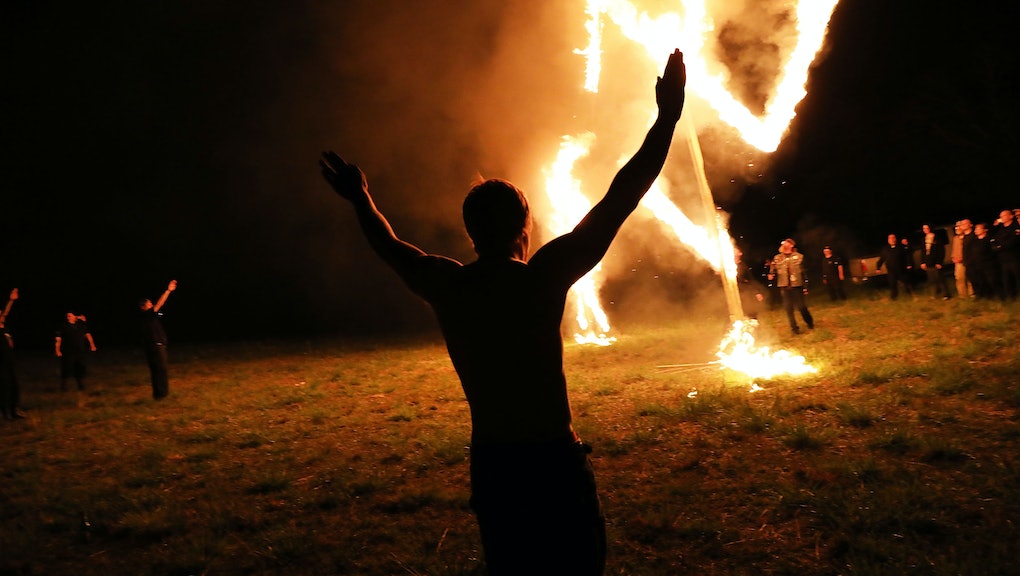 NEWNAN, Ga. — In the small town of Newnan, Georgia, almost every downtown business was closed Saturday, save for the gun shop. Large trucks were drawn across the entrance to central streets, with police and prison guards guarding the crosswalks with guns drawn. The city’s 400 or so police officers were determined to prevent Newnan from becoming the next Charlottesville and appeared to spare no expense in arming themselves to the teeth.

When the neo-Nazis arrived, late and escorted by police through checkpoint after checkpoint, there were only about 30 individuals present. The tiny group, accompanied by a few members of the neo-Confederate League of the South, marched into Greenville Street Park with neo-Nazi flags waving, carrying banners and ready to give quick speeches. This was the start of the largest neo-Nazi rally so far this year, and possibly the smallest the group’s participated in since Trump’s election — a marked decrease in size and power from the rally in Charlottesville, Virginia, just eight months ago.

Yet Commander Jeff Schoep, leader of the National Socialist Movement, told Mic at Saturday’s rally that everything is going great, actually.

Police guided the armed neo-Nazis with the National Socialist Movement (NSM) through barricades, removing journalists at the NSM’s request and threatening to remove anyone they chose, including those who took a “disrespectful tone” with the neo-Nazis.

Police were not so kind to counter-protesters. On the other side of downtown Newnan, police had already arrested several counter-protesters. As hundreds of anti-racist and anti-fascist demonstrators arrived, police with rifles shouted for everyone to remove any masks. Those that didn’t comply in time were pulled out of the crowd and arrested. When one crowd objected, police raised their weapons at the crowd and shouted for them to get back. This has become typical at right-wing rallies since Charlottesville — police do what they can to accommodate the permit-holders while employing any force deemed necessary to prevent counter-protesters from becoming unruly.

Several reporters were unable to even reach the rally grounds, walking around town for miles, shut out by local officers, state police and even corrections officers who were brought to Newnan. Officers in heavy armor and holding rifles marched in military-style formations around downtown Newnan.

During the Civil War, Newnan was a safe haven. As Union General William Sherman burned his way through Georgia, Newnan was set up as a hospital city, converting schools and churches into medical facilities to treat both Union and Confederate soldiers. Seen through the anti-historical lens of the Lost Cause mythology, Newnan could, perhaps, be seen as a lasting symbol of Confederate resilience and mercy.

Is this why the National Socialist Movement chose Newnan for its rally? No. It just picked it at random, Burt Colucci, the chief of staff for the NSM, told the Atlanta Journal-Constitution.

Founded in 1994, the National Socialist Movement removed the swastika from its flag only in the past couple of years, swapping it for the Odal rune, another symbol used by Nazi military divisions. It gives the familiar one-arm Roman salute, demands that all nonwhite immigrants leave the United States and insists that there is a Jewish conspiracy to destroy Western civilization. It is neo-Nazis, unambiguously, and possibly the most organized public-facing neo-Nazi group in the country.

But it is also one of the last.

What’s left of the alt-right

In the year or so before Trump’s election, when the so-called alt-right bubbled up from forums like 4chan and Reddit, it was difficult to say what it actually stood for, except to say that it comprised a loose coalition of trolls, white nationalists, men’s rights reactionaries and right-wing provocateurs. It was when the movement started seeking a coherent identity that it began to fall apart.

In the run-up to Charlottesville, conservative media personalities like Mike Cernovich and Gavin McInnes aggressively distanced themselves from the alt-right as it became clear that it was a movement for overt racism. That was the purpose of Charlottesville’s Unite the Right rally after all: for the alt-right to come together in its commitment to white nationalism.

The litany of minor scandals that chipped away at the far right since then is exhaustive. Chris Cantwell, the white supremacist made famous from his appearance in Charlottesville, admitted he’d become an FBI informant. White nationalist figurehead Richard Spencer announced an end to all of his preplanned public appearances, saying that “antifa is winning.” Paul Nehlen, a white nationalist running for U.S. Congress in Wisconsin, was kicked off several social media platforms and denounced by Breitbart’s Steve Bannon, who was pushed out of the Trump administration shortly after.

In October, it appeared that the white nationalist right had been pared down to a handful of white supremacist organizations, including the National Socialist Movement, the League of the South and the ascendant Traditionalist Worker Party. Then, the TWP’s leadership was torn apart by a domestic violence debacle between its senior leadership. The national organization was destroyed in about the span of a day.

The cadre of neo-Nazis who rallied in Newnan represent a contingent that existed long before the alt-right and will continue to exist long after. When the rally ended and the police marched away, the neo-Nazis traveled to a private location in nearby Draketown for a “lighting” gathering around a burning swastika. The tradition isn’t an artifact of the Trump era but a hearkening back to the Ku Klux Klan of the early 1900s, which burned crosses in celebration after members got the idea from a movie, The Birth of a Nation. If the recent post-Trump burst of white nationalist organizing has declined, what’s left isn’t necessarily the remnants of a new movement but the resting state of white supremacist organizing in America as they have been for decades.

Which is not to say that the alt-right’s adherents are reformed and repentant. Heidi Beirich, intelligence director for the Southern Poverty Law Center, told Mic by phone before the rally that it’ll continue to track the proliferation of hate groups online. Although Beirich believes that 2018 may, in fact, see a possible decline in hate groups organizing in public, the alt-right brought white nationalism into our media and institutions that will persist long after the tiki torches die out.

“We may have fewer Nazis demonstrating, or fewer Nazi-types involved openly, but in a way, they’ve got their toe-hold now into how DHS does its business and how ICE does its business,” Beirich said. “Their anti-immigrant views, their anti-Muslim views have really infiltrated the mainstream.”