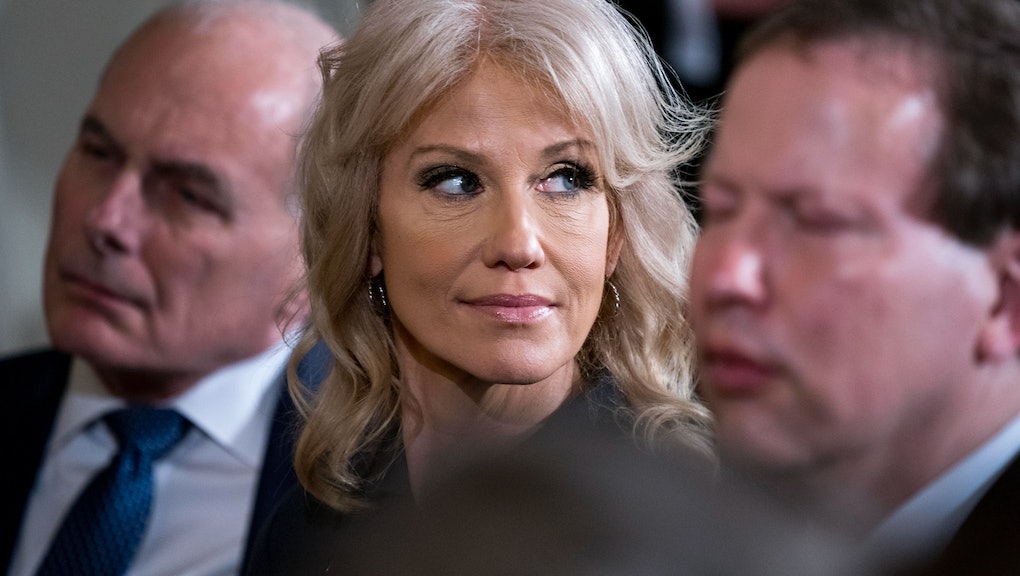 White House adviser Kellyanne Conway would not say Sunday whether President Donald Trump’s personal attorney, Michael Cohen, has incriminating information about the president that he might share with authorities. Conway appeared on CNN’s State of the Union to discuss Trump’s tweets from the previous day about whether Cohen would cooperate with federal authorities.

Trump lashed out at the New York Times on Twitter on Saturday over a report that said Cohen may “flip” sides and cooperate with federal authorities. Trump said Cohen would not flip. Conway characterized Trump’s tweets as merely him “defending” a close colleague.

“You have to look at everything the president has said about Michael Cohen and the FBI raid — he’s defending someone he’s worked with and known for a dozen plus years, Dana, who he thinks is being treated unfairly,” Conway told CNN’s Dana Bash.

Trump’s tweets primarily took aim at the New York Times, as he defended Cohen as a “fine person with a wonderful family” while decrying “third-rate reporter” Maggie Haberman. The Times also painted an unflattering picture of Cohen and Trump’s reportedly “one-sided” relationship, suggesting that Trump treats Cohen poorly and believes him to be “inadequate.”

When asked by Bash if Conway could say whether Trump “did, unequivocally, nothing wrong that he’s worried Michael Cohen will tell the feds about,” Conway continued to demure.

“You’re asking me what do I know are in documents over a dozen or so years,” Conway said. “I’m telling you that the president’s concern has been for Michael Cohen and the way he’s been treated.

“I see people go on TV constantly who don’t know President Trump at all and say, ‘He’s loyal to no one but himself.’ That is completely not true. He stands up for people in his inner circle and people he knows when he thinks they’re being treated unfairly, and he’s done it again and again. He shows a great sense of loyalty to people whom he thinks are being treated unfairly.”

When Bash pressed further on whether Trump’s concerned tweets weren’t sent because he’s in “potential legal jeopardy,” Conway pointed to reports that Trump has been told he is not a target of the FBI’s ongoing investigation into the Trump campaign and its potential collusion with Russia.

“To answer your question, very pointedly, this president was told three times by Jim Comey, privately, that he wasn’t under investigation by the FBI,” Conway said. “The Washington Post reported ... that the president has been told he is not a target in the investigation.

“I think we’re answering your question in many different ways, I just want to now take it in a different jurisdiction.”

Trump also called out an unnamed “drunk/drugged out loser who hates Michael” as a source for the Times’ reporting in his tweets, whose identity still remains a mystery after Conway’s Sunday interview. The Times article quoted several Trump-connected officials on the record, including former advisers Roger Stone and Sam Nunberg and two Trump biographers.

“I don’t know who he’s talking about there,” Conway said about the unnamed source, before pivoting to Trump’s record on drugs and opioid abuse and pointing out that Trump shared his own personal relationship with abuse, concerning his brother Fred.

Conway added that Trump “owns” his tweets, despite not openly naming the potential source.

“You can read the article and make your own — I’m sure CNN will talk about it for the next week, I’m sure there’ll be graphics and chyrons and everything else,” Conway said when asked why Trump would not name the source.