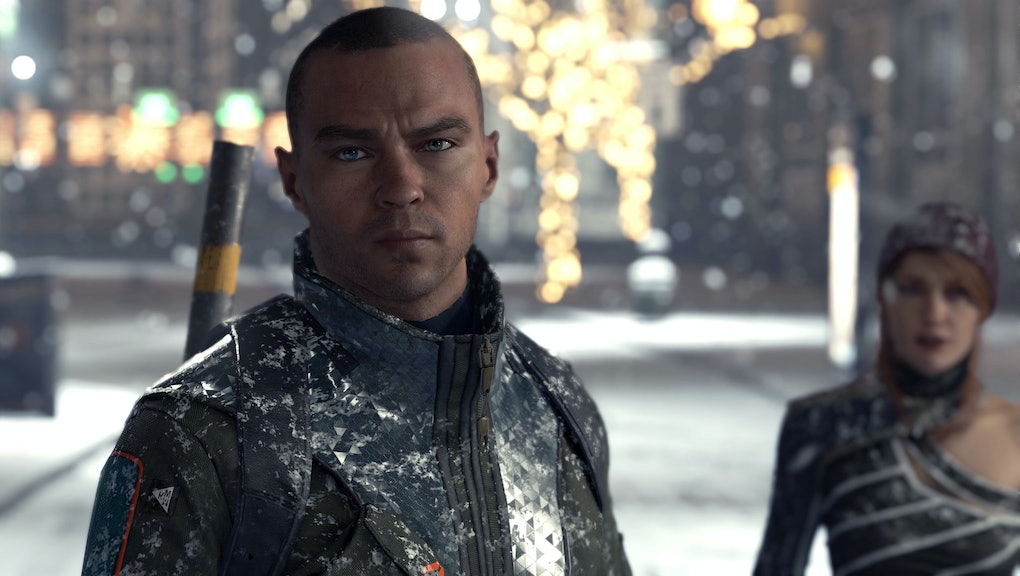 Few would mistake Siri or Alexa for a real person. The current crop of virtual assistants are smart, but nowhere close to being human. Their speech sounds closer to a Google search page than actual dialogue and, for now, they don’t come in a physical form.

But what if our assistants weren’t virtual? What if we created human-like robots with human-level intellect? Would they deserve basic human rights? To imagine the answer to this question, video game company Quantic Dream is set to release a free demo Tuesday for Detroit: Become Human.

In Detroit, robots look like real people — one of the main characters resembles the actor that voices him, Jesse Williams. Minka Kelly, Clancy Brown, Valorie Curry and more contribute voices to the game’s other characters. The game takes place in 2038, in a version of Michigan where human-looking androids serve their human owners at every turn.

Early parts of the game show androids making breakfast for their owners, shopping for them, and even cleaning up the litter they toss on the ground. The robots are bought, sold and repaired just like computers. But if you asked the robots, they’d say they feel quite alive. The robot Markus sparks an uprising, and questions why they should be serving humans in the first place. To fight for fair treatment, the robots revolt.

“Is being self-aware determined by how many calculations your brain can make?” David Cage, Detroit’s director, asked during a demonstration of the game on Thursday in New York. “If so, we’ll have machines that are more powerful than our brains in five to 10 years.”

Cage referred to the book The Singularity Is Near by Ray Kurzweil when he explained his ideas on how machines could be seen as human us. “The human brain hasn’t evolved much in the last 2,000 years,” Cage said. “When you graph machines’ level of intelligence, their curve is much steeper than ours. Between our flat curve and their dramatic curve, there will be a point where the two cross. It’s here that they will be more intelligent than we are.”

Not only will non-virtual assistants be smarter than us, they’ll teach their robo-friends faster, too. “Training a human to walk, talk, learn a discipline, etc. takes 20-25 years,” Cage said. “If one machine knows something, another can know it instantly.”

The team behind Detroit added features to make their androids more palatable to the people that use them. “We added things like blinking and fake breathing to the robots,” Cage said. “Imagine being a room with someone that was completely still.”

It’s easy to see why robots of Detroit would revolt. Small aspects of Detroit life — like how androids ride in a separate section in the back of the bus — show how often they receive unequal treatment. According to Cage, the game isn’t exactly an allegory for the struggles during the civil rights era, but for fighting for fair rights against an oppressor in general.

Cage refused to answer whether or not the human-level AI in Detroit gained the same rights as humans. But can we realistically see a walking, talking Siri by 2038?

“Twenty years away is a bit optimistic,” Cage said. “But it won’t be much more than 30.”