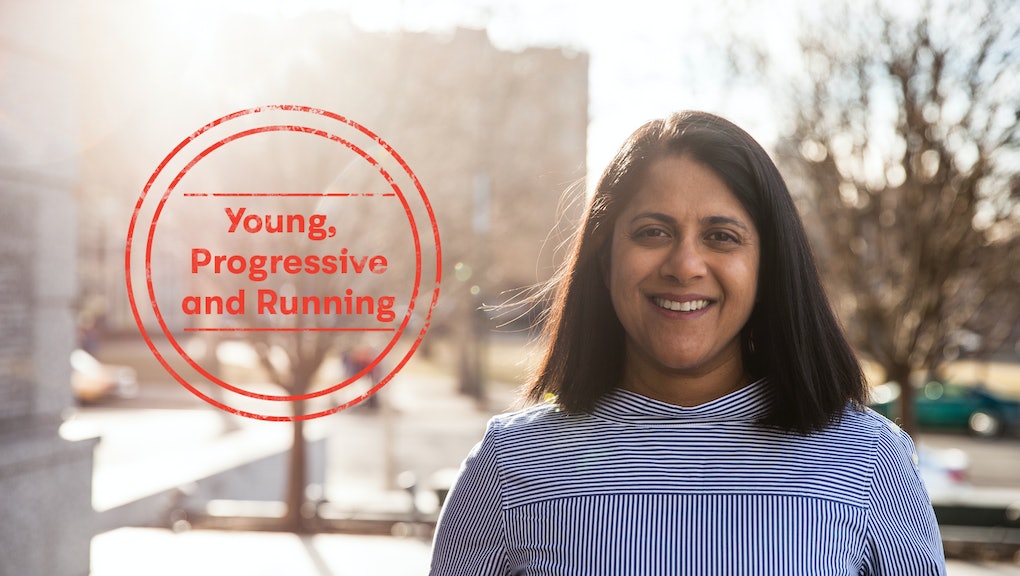 Saira Rao did not always consider herself a critic of the Democratic Party establishment. In fact, up until the 2016 presidential election, she was one of its proudest supporters.

“I would say that I am a recovering neoliberal,” Rao said in an interview with Mic. “I have been a huge Democratic activist my whole life. ... My first vote was for Bill Clinton in 1996. I was a first-year student at UVA. I named my ficus plant Hillary. I was just like a sap for the Democratic Party. I have knocked doors. My daughter and I made a billion phone calls to canvas for Hillary.”

But now those days are over for Rao, as she mounts a progressive primary challenge against a top-ranking House Democrat, who represents her home district in Colorado.

The daughter of Indian immigrants, Rao grew up a proud progressive Democrat, and prior to the 2016 election, she thought the party was working to represent her interests and values. She cofounded and ran a Denver-based children’s book publishing company that promoted diversity and representation in children’s literature and never thought of getting involved in politics beyond the volunteer level.

That all changed in the year after Donald Trump’s election, when Rao says she began to think Democrats had taken for granted the immigrants and women of color who helped elect them. In December 2017 when Rao wrote about her disillusionment with the modern Democratic Party in a Huffington Post op-ed titled “I’m a Brown Woman Who’s Breaking Up With the Democratic Party.” Rao says the editorial quickly went viral, and her story became a rallying cry for progressives who felt the Democratic Party wasn’t listening to them.

“After [Clinton] lost, a bunch of things came very apparent to me, and I had a huge awakening,” Rao recalled. “I went from being a neoliberal to a true progressive. I recognized that I had been tokenized as brown woman. I gave money. I held fund-raisers. And when it came time to talk about race and the Muslim ban and refugees and DACA, most of the corporate Democrats didn’t want to have the conversation.”

Now Rao is running for Congress on an unabashedly progressive platform that she says prioritizes the needs of marginalized peoples. She supports abolishing Immigration and Customs Enforcement — the law enforcement agency tasked with carrying out the president’s deportation agenda — and forgiving all outstanding student debt en masse.

Unlike other progressive primary challengers in 2018, Rao isn’t running to unseat a conservative Democrat. Her opponent, Democratic Rep. Diana DeGette has served in Congress for over 20 years and has a relatively strong progressive voting record —  one that even Rao herself declined to criticize when asked specifically about it.

“We need fighters in Congress. We don’t need people to check the right boxes,” Rao said. “I don’t think that voting is everything. I have no beef with DeGette’s voting record. I just think that, that’s a fraction of the job. We have come to expect so little from our elected official, so little, that we’ve come to think, ‘Oh my god, that if they just check the right boxes, we are all good.’ And that is sad for America.”

Rao says she believes contested primaries are important to keep the Democratic Party pushing forward with a bold positive agenda. She also believes that it’s important for diverse cities like Denver to see their diversity represented in Congress.

“In the nine-person congressional delegation from the state of Colorado, everybody is white,” said Rao, who is Indian-American. “And there is a real desire to see diversity. Representation matters. It just does. You have to have people in Congress who look like you in order to connect.”

That message has resonated with some of the people in her district. As of the last FEC filing Rao has out-fundraised DeGette’s campaign in her first quarter in the race, despite her pledge not to take any money from corporations or PACs.

DeGette’s campaign, for its part, has not taken a hard stance against Rao’s entry into the race.

“We certainly welcome any challengers; that’s how our system works,” DeGette’s communications director told Mic. “But we do find it puzzling that she doesn’t have any specific issues with Congresswoman Degette’s record. It’s really important this cycle that Democrats work on taking back the House. Clearly the congresswoman has a long record of passing legislation, even in the minority, that addresses core Democratic issues and values.”

But Rao has already caught the attention of local and national press with her campaign, and with 2018 expected to be a wave election for progressives, upstarts like Rao may pose a bigger challenge to incumbents than once thought.

“For the past few decades we keep doing the same thing. These folks who have been in Congress for decades, we keep voting for them and we keep getting the same response” Rao said. “We have a window, and if we don’t select some new voices, fighters who are not beholden to corporate interests. We are in deep, deep trouble.”