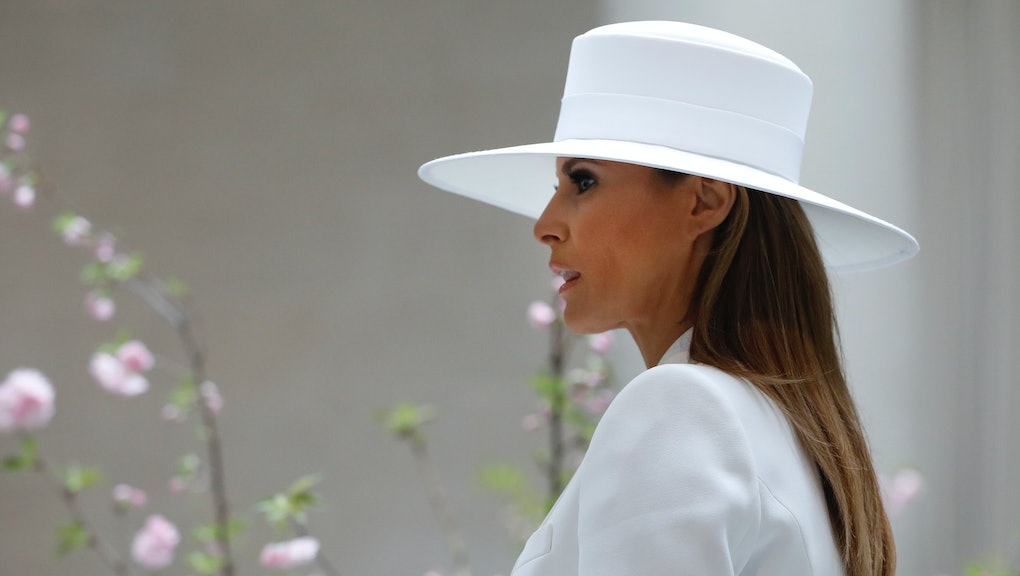 Like the pussy bow and hurricane stilettos before, this week Melania Trump made headlines with an inadvertent sartorial statement, this time in the form of a white, wide-brimmed Hervé Pierre hat that captured the attention of the internet. “Melania Trump, White Hat,” the New York Times’ Vanessa Friedman concisely headlined her piece on the accessory.

But that wasn’t all in what was a busy week for Mrs. Trump, which included a solo appearance at Barbara Bush’s funeral in Houston and a State Dinner held for visiting French President Emmanuel Macron and his wife Brigitte Macron.

Saturday, April 21: All black to the funeral of Barbara Bush in Houston, Texas

Returning from Houston, Melania Trump switched from one all-black getup to another, this time with a hodgepodge of pieces from notable faves: a Givenchy cape with a Dolce & Gabbana dress, a Ralph Lauren belt and Christian Louboutin heels to help welcome President Emmanuel Macron and his wife Brigitte Macron.

Fortunately, she was not asked to do any of the digging, and instead stood back idly for photo ops.

The $2,195 Michael Kors belted asymmetric crepe blazer and the $775 Louboutin denim and patent leather pumps weren’t what caught folks’ attention, but rather her white, wide-brimmed Hervé Pierre hat, which drew comparisons to both Beyoncé and The Young Pope.