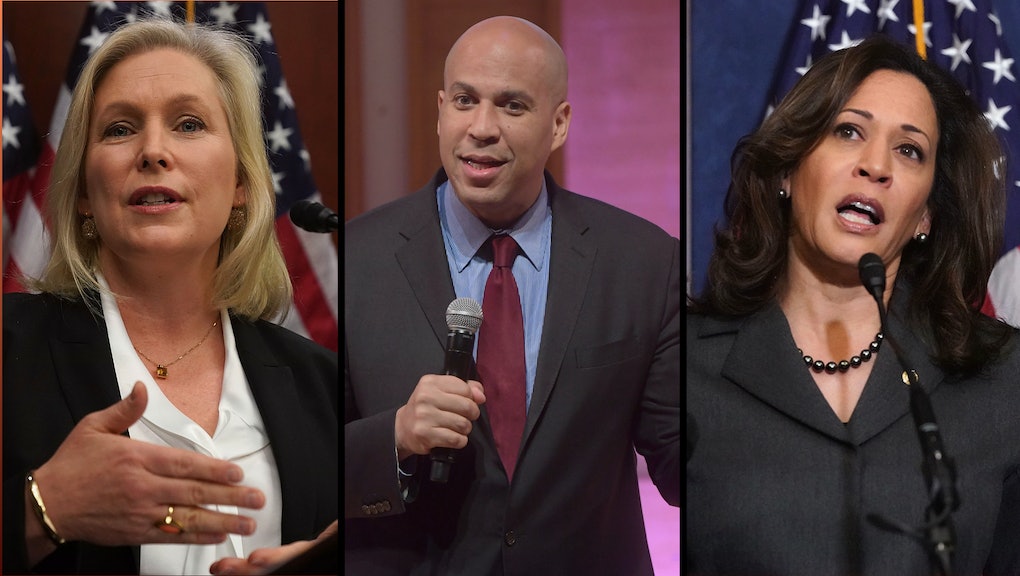 Single-payer health care, postal banking, marijuana reparations, a federal job guarantee — a few years ago, these were the kinds of policies that were typically discussed only in leftist policy circles and on Twitter.

Today, they’re all actual pieces of legislation introduced in Congress by a handful of Democratic senators who are all widely believed to have presidential aspirations.

On Wednesday, Sen. Kirsten Gillibrand took the latest in a series of leftward lunges, when she introduced a new plan to create a postal banking system in the United States. Postal banking has been a big agenda item for progressive thinkers in the world of banking justice. But before Wednesday, progressives in the Senate had done little more than toy with the idea.

But in 2018, this kind of bold policy move by Gillibrand is par for the course.

Since the beginning of April, Gillibrand, along with Sens. Cory Booker and Bernie Sanders, have all come out in favor of a federal program to virtually end unemployment in the U.S. by having the federal government guarantee employment — even as unemployment reaches historic lows.

At the same time, both Sanders and Gillibrand have backed a bill introduced by Booker that would legalize marijuana nationwide, while taking a number of radical steps to try to remunerate the disproportionately black and brown populations who have suffered because of the drug’s criminalization. In 2016, the most ambitious marijuana policy backed by a presidential hopeful was Sanders’ far more moderate plan to simply lift the federal ban and allow states to make their own laws on the issue.

One-third of Senate Democrats have already signed on to Sanders’s bill to create a single-payer health care system that would rival even the most substantial national health care systems across Europe and Canada.

This agenda illustrates how far the Democratic Party has come since the 2016 election, when the party’s then-standard bearer Hillary Clinton ran for president on a moderate agenda of continuing the Obama legacy through incremental changes and improvements.

Since Trump’s unexpected election in 2016, Democrats on the national stage have been jockeying to try to stand out in the crowded 2020 shadow primary. The shift toward progressive policy represents a shift from the early days of the Trump presidency, when many of the same senators used their platforms in the Senate to take stands against the Trump administration without drastically shifting their own stances on policy.

Meanwhile Sen. Kirsten Gillibrand was calling on the president to resign over the myriad accusations of sexual harassment and assault that had been levied against him by multiple women.

Yet despite the Democratic base’s widespread frustration and outrage with the Trump administration, progressives were not content to see their would-be future leaders simply take principled stands against Trump.

Base voters began clamoring for a positive vision of what Democratic leadership would look like, and were largely unenthused when the party released its Better Deal platform, which looked a lot like their old policy platform with a bigger emphasis on some populist economic items.

Now, Democratic hopefuls appear to have gotten the message and are staking out positions on leftist policy ideas once thought to have been pipe dreams. Still, their rapid evolution may not be enough to keep up with progressive ideas bubbling up from lower in the party.

For instance, a new movement to “abolish” or “defund” Immigration and Customs Enforcement, the federal law enforcement agency tasked with carrying out the deportation of undocumented immigrants, has emerged in response to the Trump administration’s radically anti-immigrant agenda. So far, no senators have endorsed the idea.

When Harris was asked by MSNBC host Chris Hayes if she thinks ICE should continue to exist, the first-term senator defended the agency and argued for more moderate reforms.

That answer is understandable, even expected, in the current political environment, in which only a handful of first-time congressional candidates, have endorsed the idea of abolishing ICE, as they seek to mobilize the progressive base ahead of 2018.

But with more than a year to go until the 2020 presidential election, and conventional bounds of expectable Democratic policy positions being pushed further left each day, progressive presidential hopefuls may soon find it hard to reject any policy position favored by their base, no matter how out there it is.