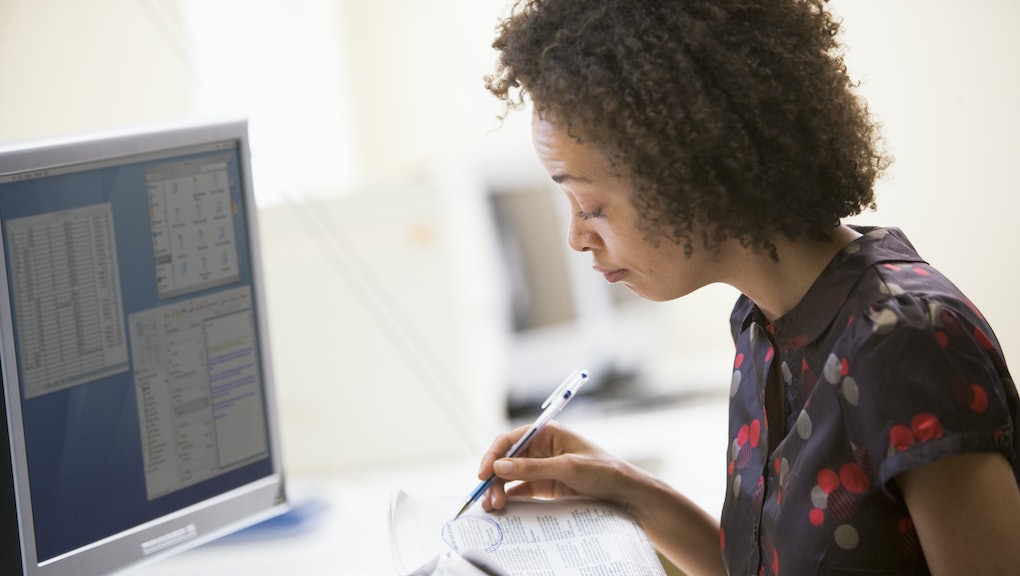 You’ve done the work, taken the finals and donned the graduation cap — now it’s time to put those skills to work and get a job. But what do you do when all the entry-level jobs you want require experience and you don’t have any yet? Maybe you needed to work real jobs in the summers, missing out on the glamorous, usually unpaid internships that your peers used to polish up their resumes. Maybe you still don’t really know what you want to do with your life.

The stakes are high. The class of 2018 can expect to work until they’re 72, according to a recent study from NerdWallet. And that’s with “diligent budgeting.” That’s why it’s all the more important to get an early start fleshing out the skills you’ll need to climb the professional ladder and increase your earnings.

One way that recent grads in particular go wrong during the job hunt is treating it like school, said Scott Steinberg, a professional speaker and author of the The Business Etiquette Bible, in a phone interview

“We’ve always been conditioned through years of school that there’s only one way of getting things done. That’s not necessarily how things work in the business world,” he said. “Trying to find a job is work unto itself, and sometimes you have to be equally innovative and clever.

While you probably know that it’s important to double (and triple) check your cover letter for typos, show up to your interview on time and scrub the keg stands from your social media feeds, hiring managers can be a tricky group to understand. So what are they looking for from recent grads? And how can you get them to give your resume the attention it deserves?

1. Remember it’s not all about the money (yet)

While you definitely need a paycheck big enough to cover your daily expenses, early career applicants need to think about building skills for jobs down the road too, said Glassdoor job hunt expert Scott Dobroski in a phone interview. After all, if you acquire the right professional and interpersonal skills you’ll need to climb the career ladder, a smaller starting salary won’t matter as much after years of raises.

“If you’re 22 years old and you can make $100,000 a year, but you have to work in a room by yourself five days a week and you just talk to one person once a day via email, that might not be the best option,” Dobroski said. “It’s important to get a great foundation.”

The desire to get foundational experience — core workplace skills like contributing to meetings and working on your own projects — might be one reason why recent grads are so eager to work in startups. Garrett Lord, founder of the job site Handshake, said that recent grads are three times as likely to search for jobs at startups than they were in 2016, according the data on his site.

How do you figure out if a job will give you a good foundation? Dobroski recommended asking questions about the structure of the team. How many people are on it? What departments do they collaborate with closely?

“You want to look for a team or department you’re going to join where you’re surrounded by a few to several people that you can ask questions [to] and have frequent interactions [with],” he said. “If there’s no one above you, that could be a red flag.”

2. Stand out by mentioning the right tech skills

The most important thing for recent graduates to do is to find a way to stand out, particularly when it comes to name-dropping the right skills. Hiring managers are generally looking to the next generation of hires with an eye toward who can help them stay ahead of the curve, Lord said.

“When we’re talking to talent acquisition leaders, they’re looking at college talent as the way to improve the digital transformation of these companies,” he said. “Employers are also really looking for employees that have resilience, have grit, analytical rigor, and particularly data science, which is one of the most hotly searched for skills on our platform.”

You don’t need to have worked specifically in data science to make it clear that you’re comfortable with numbers, either. One good impulse to resist — don’t use your resume to talk about all the work you did on various teams. Hiring managers do want to hire team players, but the work you’ve done within a team can often be impossible to quantify. Show your numeracy by quantifying your accomplishments.

Other highly coveted skills for the class of 2018? Steinberg also pointed to organizational psychology, artificial intelligence and blockchain as emerging fields where companies are particularly eager to find talent. Machine learning, cannabis cultivation and remote fitness instruction are other skills where pay is expected to climb particularly fast, as well.

Finally, all the career experts Mic spoke with for this story said that you can’t expect much from a job application if you’re not willing to follow up. Onion headlines about our condescending grandfathers aside, a follow-up note is an essential part of demonstrating that you’re interested and enthusiastic about the job.

“Reach out to people in that department within 24 to 48 hours,” said Glassdoor’s Dobroski, “Even if you have to guess the email address ... People are willing to help and reward people who have a lot of interest.”

Steinberg agreed that there was nothing remotely uncouth about following up with people you don’t know.

“The single worst thing you can do is just blindly submit a resume and hope a computer or resume hunter is actually going to be able to discern what the hell makes you unique,” Steinberg said. “The worst thing anyone can say to any request is no, even if you just reach out simply to the CEO.”

Finally, remember that it’s a marathon, not a sprint. The typical job hunt takes close to 90 days, according to data from TalentWorks. And while there is some evidence that the class of 2018 will have a more competitive job hunt than the class of 2017, they can also expect fatter paychecks on the offers they do get as well. Think of it as yet another one of adulthood’s many silver linings.

This article was originally published on April 30, 2018