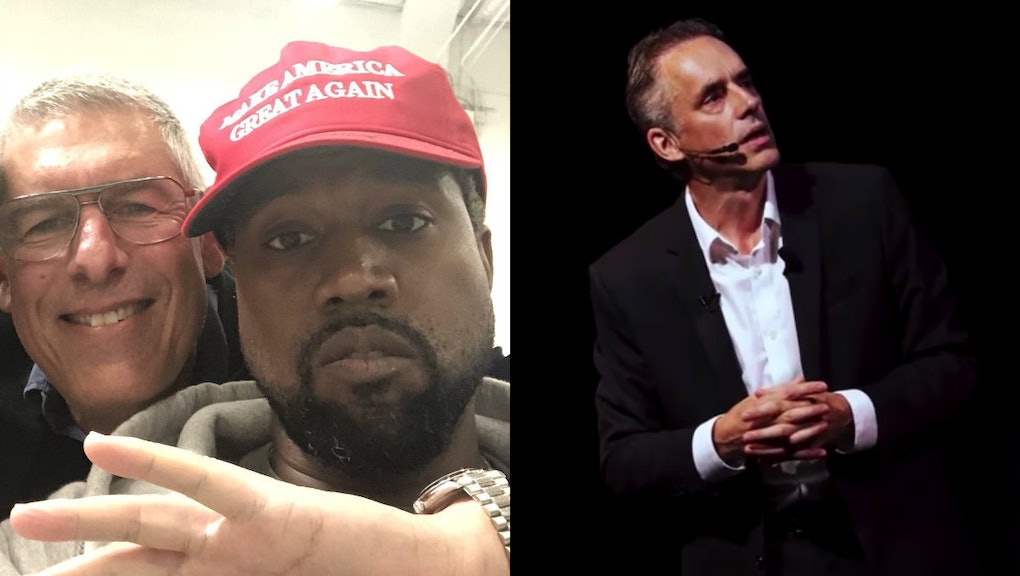 After days of exhausting his fans with tweets celebrating the president and other conservatives, Kanye West tweeted a video Thursday morning that was all about the music. At least, that’s how it seemed.

The video is of West’s laptop that’s playing an original freestyle he performed exclusively for TMZ. As the phone in West’s hand tilts, one other open browser tab can be seen on his laptop: a video of a lecture by Canadian conservative Jordan Peterson.

Peterson, a clinical psychologist and professor at the University of Toronto, has only recently begun making a name for himself in the public. He first gained notoriety as an opponent of a Canadian bill designed to protect transgender people from hate speech, but became known for his viral videos that subversively mix conservative ideology into self-help advice. His recent best-selling book 12 Rules for Life, mixes constructive advice about how to live an orderly and confident lifestyle with conspiracy theories about how radical neo-Marxists are trying to dismantle Western civilization with feminism and anti-racist activism. Last week he appeared on Bill Maher’s HBO show, and now regularly appears on Fox News.

The video West had open on his computer was called “Why You Need Art in Your Life.” It’s apparent why someone like West, an artist with a prolific sense of self-importance, would like such a video. In it, Peterson describes creative people as romantic heroes who venture into the chaotic unknown to bring back barely articulable truths.

West and Peterson are also both fascinated by traditional Western art, history and mythology. Peterson is infamous for his videos in which he argues, for example, that women who wear makeup but also complain about sexual harassment are hypocrites. Some of Peterson’s most popular videos are his myriad lectures on the Bible, mythology and philosophy. In West’s lyrics, he often casts himself and those around him in ancient myths and parables, or scenes from the Bible. He’s also incorporated traditional Greek art and architecture into his live shows and music videos.

The video West had open on his computer wasn’t expressly conservative. But Peterson’s reverence for mythology is more than just sheer artistic wonder. It’s part of Peterson’s comprehensive political worldview.

Peterson believes, for example, that modern culture has been corrupted by a conspiracy of feminists and Marxists who are fatally undermining the masculine power of Western culture. The Disney movie Frozen and its themes of feminine empowerment, for example, is seen by Peterson as “deeply propagandistic” and artificial compared to more traditional fairy tales where gallant men rescue princesses from slumber. Peterson reveres artists and creatives as vital contributors to society, so long as they reaffirm traditional archetypes and power structures.

In West’s freestyle for TMZ, Kanye raps about questioning the common sense of our culture with the lyrics, “I’ve been washed in tradition and imma rinse.”

He should ask his new gurus how they feel about that.