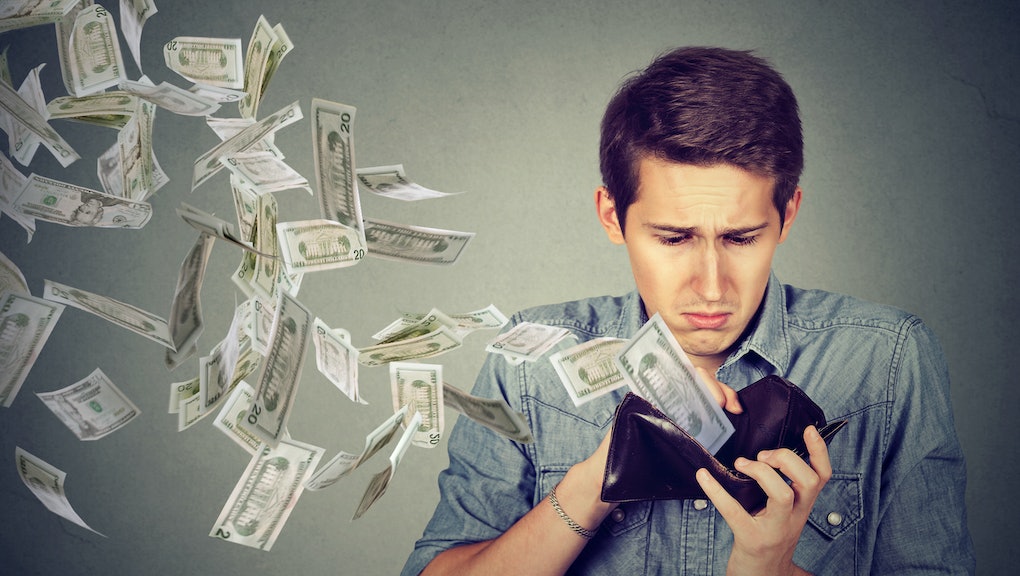 Talking about money, particularly as it pertains to personal and romantic relationships, can be awkward. In most households, handling the finances is generally delegated to one person, as opposed to having long conversations every time a bill needs to be paid or a checkbook needs to be balanced.

But even if this arrangement arrives at a 50-50 split of household responsibilities, having one person control the finances may present an unexpected danger as the years go on, according to a new paper from researchers at at the University of Texas at Austin and the University of Colorado at Boulder.

The longer you let someone else handle your finances, the worse you’ll get at managing money, said Adrian Ward, a professor at the University of Texas and the study’s lead researcher. Most troublingly, this dynamic plays out regardless of financial literacy or income, suggesting even a hypothetical stock trader could be susceptible to the effects if their spouse is ultimately making the spending and saving decisions.

“One of the most fundamental things about being human is we have limited capacity. We can’t pay attention to everything that might be useful,” Ward said. “So you start to rely on other people to pay attention to stuff for you.”

It’s a particularly troubling finding, Ward explained, because consumers seem to be under the impression that the exact opposite is true: The longer we hang out with a partner who’s trading stocks and racking up credit card miles like a pro, the more likely it is we assume that some of that information will start to sink in via osmosis.

Knowledge that involves any sort of financial terms, he said, is even more likely to go in one ear and out the other. Here’s why and what you can do about it.

Why we have a hard time learning about money

On one hand, it’s easy to see the fairness in having one person handle the finances while a spouse does the dishes. But the longer we let someone else make financial decisions on our behalf — whether it’s which bank account to use or how much to contribute to which retirement account — the worse we get at making these decisions for ourselves.

In short, the muscles we use to figure out which credit card to use, to whether it makes more sense to rent or buy your next apartment, are “use it or lose it.” We don’t just forget the specific facts and figures, we actually get worse at doing the research we need to do to figure it out.

Researchers looked at two different types of consumers, those who were picking out stock market investments and those who were planning to buy a car. Ward’s team even found an effect when they put strangers together and told them to work in groups, suggesting that the inclination to divide and conquer may be intrinsic to all kinds of networks, not just romantic couples.

Financial literacy alone is not the answer, he said, pointing to the fact that students seem to forget more of what they learn in a personal finance class than they do in a math class, even though the subject matter in the latter is usually more difficult.

And yet this kind of makes sense, in a way. Ward explained that high school juniors are unlikely to be shopping for a mortgage, so the information doesn’t rate as particularly useful. They’re pretty likely to know people who are paying attention to this kind of information for them — i.e., parents — which gives them all the more reason to tune it out.

“Relying on one another sets [people] off on these different trajectories,” he said. “It changes what you know.”

So what’s a good way to stay on top of your financial knowledge, no matter how limited it is? Making sure you’re never fully relinquishing control of household finances is important, and it doesn’t necessarily matter how you divide those responsibilities up.

A family where one person files the taxes and one person pays the monthly bills, for example, wouldn’t be as likely to show this effect. Ward’s finding also suggests the need for more policy proposals aimed at helping vulnerable seniors, who are notably more at risk for financial predation.

Simply appreciating the importance of financial literacy may also be signifiant, Ward said: “For older adults that see this coming, they do okay.”

That suggests it’s all the more important to have awkward money conversations with your partner sooner rather than later, to avoid having both parties settle into bad habits. If you and your long-term partner still haven’t shared credit scores yet, consider choosing a random date night to “have the talk,” since money conversations are much more stressful when they’re urgent.

A bottle of wine doesn’t hurt, either. And if some degree of financial equilibrium still proves illusive, consider hiring a third party — whether it’s a counselor or a certified financial planner.