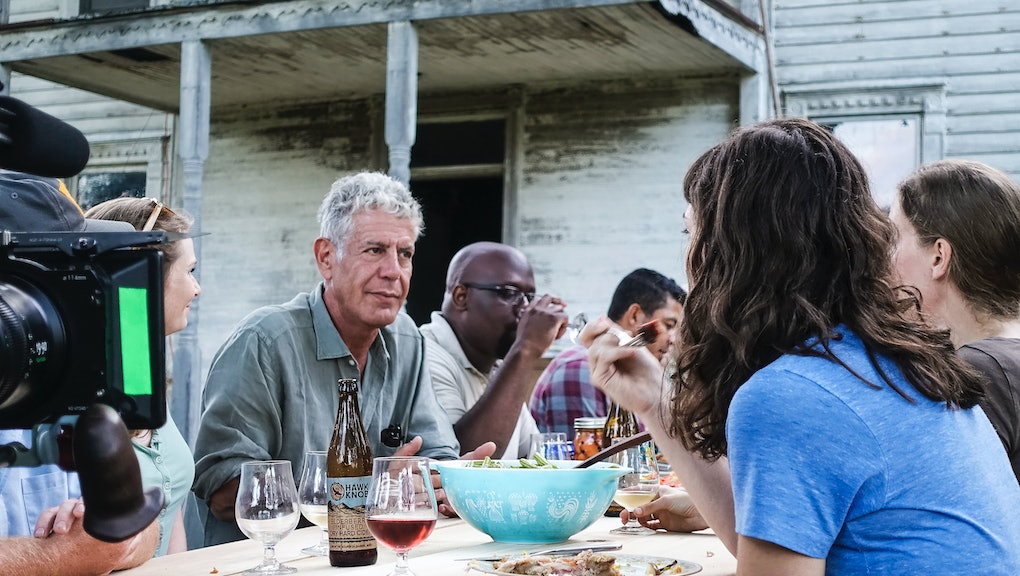 Anthony Bourdain wants you to see past whatever stereotypes you may hold about people living in “Trump’s America.” In the season 11 premiere of Parts Unknown, which aired Sunday, Bourdain travels to West Virginia to more closely examine coal country and the people who are proud to call it home. While Bourdain fans might be used to seeing the adventurer in places like Spain or Myanmar, his decision to visit an area of the U.S. that’s often overlooked as a travel destination emphasizes his evolving will — and perhaps, responsibility — to depict an array of perspectives in a country that feels increasingly at war with itself.

The episode opens with a local who says, despite stereotypes, there’s plenty more to West Virginia “than just poverty, illiteracy and drugs,” and the following hour is spent expounding on that message. Bourdain eats at the home of a fifth-generation coal mining family, hunts for squirrels with two single mothers who raise their children together and says grace over ribs in a high school cafeteria prior to the event of the year — homecoming. He practices his aim with a family who makes customized weapons and engages them in a discussion about gun rights over a meal. “Whatever you feel about gun rights — there is an undeniable, visceral thrill to blowing shit up,” he says in a voiceover, after firing rounds from an automatic firearm at pumpkins.

McDowell County, West Virginia, might be “the heart of God, guns and Trump country,” but Bourdain zeroes in on values that arguably most Americans share, like celebrating family, high school sports and hard work.

The premiere explores the complex issue of coal; the industry is what led to the state’s success and then its fall into poverty as various political, environmental and economical influences sucked the area dry of jobs and resources. Outsiders may criticize those working with coal — “mining causes damage to the environment, of this there is no doubt,” Bourdain says in the episode. But for many in the industry, a career change isn’t as simple as it sounds. “It’s so easy from afar to say that coal’s time here has come and gone — that we should let the miners move and find other work,” Bourdain says. “What other work? The state’s biggest employer is now Walmart.”

Bourdain and the miners talk about the coal industry while they share a platter of bear meat — after they say grace — on a picnic bench in a poorly lit mine. While the men have pride for their work, none of them wish it to be a future for their children. Their situation also helps to define their politics. “Hilary openly said she’s going to put a lot of coal miners out of work,” one of the men pointed out. “Wrong answer.”

It wouldn’t be Parts Unknown without some enticing food, and this episode includes spaghetti pizza, snapping turtle patties, hydroponic farming and a food bank that feeds most of McDowell County. Bourdain visits a working farm called Lost Creek Farm, where Appalachian foods are at the heart of good cooking and a close-knit community. A sweet corn chowder gets dressed with broken communion wafers because, as one of the farmers explained, “the way Appalachian food works is that you cook within your means.” Buttermilk fried rabbit, elderberry cider and many other dishes are all prepared with pride and respect for West Virginia’s agriculturally rich history.

Seemingly everyone Bourdain talks to — whether they’re in food, football or mining, talks about their respect for their home and its history. As one of the farmers said, “When you’re living on the land and doing what your ancestors did, you feel a connection that you can’t get anywhere else.”

As Parts Unknown starts its 11th season, Bourdain is ready to pop the so-called liberal bubble by empathizing with Americans of all stripes. “Here, in the heart of every belief system I’ve ever mocked or fought against, I was welcomed with open arms by everyone,” Bourdain says in the beginning of the episode. “I found the place both heartbreaking and beautiful, a place that symbolizes and contains everything wrong and everything wonderful and hopeful about America.”