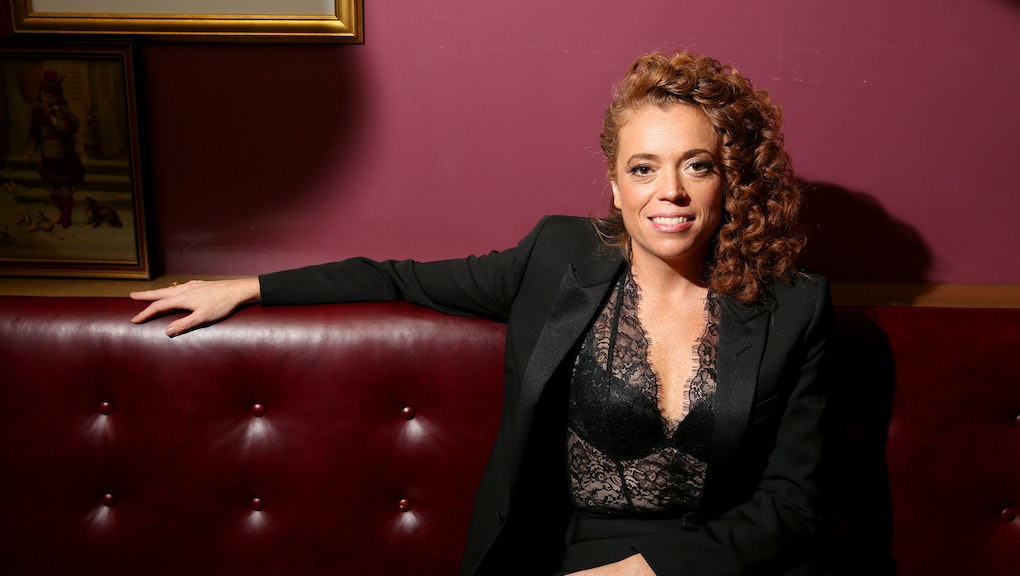 As President Donald Trump skipped the annual White House Correspondents Association dinner for the second year in a row on Saturday, it was the women of the Trump administration who stood in as ceremonial roastees.

Comedian Michelle Wolf delivered a scathing and hilarious set that took aim at a broad array of Trumpland officials as well as the press. But she reserved a considerable portion of her set for roasting White House press secretary Sarah Huckabee Sanders, who took the president’s place on the dais, as well as White House counselor Kellyanne Conway in the audience.

“I’m a little starstruck. I love you as Aunt Lydia on The Handmaid’s Tale,” Wolf said turning to Sanders, comparing her to the villian in Hulu’s adaptation of Margaret Atwood’s dystopian novel.

“Every time Sarah steps up to the podium I get excited because I’m not really sure what we’re going to get,” she continued. “A press briefing? A bunch of lies or divided into softball teams. ‘It’s shirts and skins and this time. Don’t be such a little bitch, Jim Acosta.”

On Conway, Wolf suggested that the members of the press should start ignoring her entirely.

“If you don’t give her a platform, she has nowhere to lie,” Wolf said. “It’s like that old saying: If a tree falls in the woods, how do we get Kellyanne under that tree?”

“I’m not suggesting she gets hurt,” Wolf followed up. “Just stuck.”

But most of her powder was reserved for Sanders.

“I actually really like Sarah. I think she’s really resourceful. She burns facts, and then she uses that ash to create a perfect smokey eye,” she continued later in the set. “Maybe she’s born with it? Maybe it’s lies?”

That joke didn’t sit well with New York Times reporter Maggie Haberman who tweeted, “That @PressSec sat and absorbed intense criticism of her physical appearance, her job performance, and so forth, instead of walking out, on national television, was impressive.”

It’s not clear what made Wolf’s use of a backhanded compliment about Sanders’ eye makeup particularly “intense.” In the past, White House correspondents dinners have included more cutting attacks on people’s physical appearances. In 2011, comedian Seth Meyers used the dinner to critique Donald Trump’s appearance years before he actually became a presidential candidate.

Wolf, for her part, defended the joke in a response to Haberman, tweeting, “Hey mags! All these jokes were about her despicable behavior. Sounds like you have some thoughts about her looks though?”

Other members of the press echoed Haberman’s concerns about Wolf’s jokes.

Margaret Talev, a Bloomberg reporter and president of the White House Correspondents’ Association, told Politico that some of the jokes “did not embody the spirit of the night” and that she “appreciated Sarah Sanders for joining us at the head table and her grace through the program.”

Republicans also expressed outrage over the joke. Conservative commentator Mercedes Schlapp called Wolf “twisted” in a tweet and said she was “appalled” by the the attacks on Sanders.

The backlash is ironic, given that it comes at a time when the Republican president of the United States has used his platform to repeatedly attack women’s physical appearances via Twitter, and the conservative movement as a whole has turned the fight against “political correctness” into something of a raison d’être.

But conservative consternation and Trump’s protest of the event may finally help build bipartisan consensus for the brewing calls to put an end to the White House correspondents dinner, which critics have noted has evolved into a glitzy schmoozefest that allows journalists to get too close to their sources while simultaneously sewing discontent between politicians and the press.