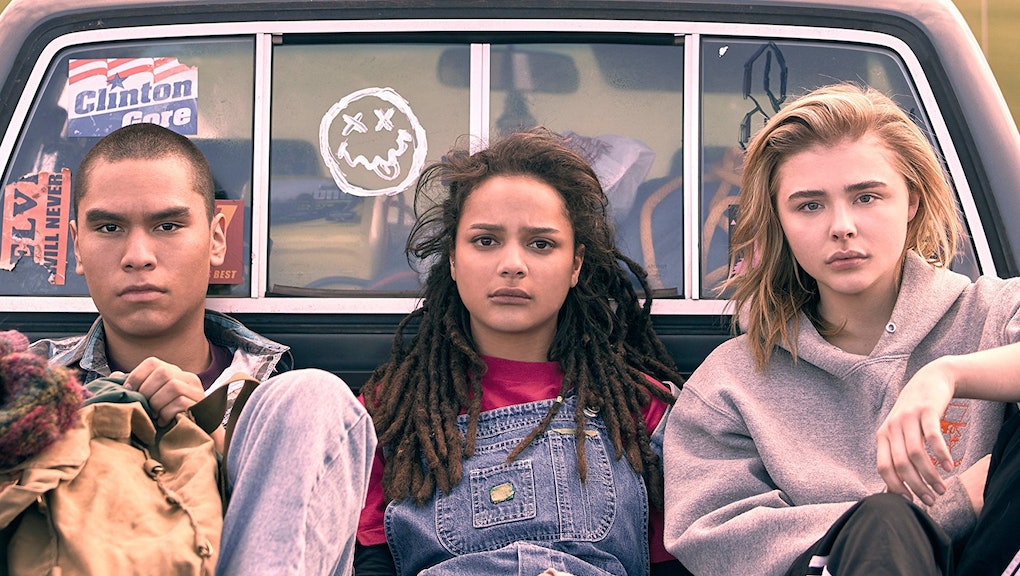 In the new film The Miseducation of Cameron Post, the titular main character, Cam, played with teenage apathy and fragility by Chloë Grace Moretz, gets caught fooling around with a friend and quickly finds herself at God’s Promise. God’s Promise is a sort-of evangelical summer camp-cum-boarding school for kids who are “struggling with same-sex desire,” as the school’s misguided leadership puts it.

There, isolated in the woods, in the Internet-less early 1990s, Cam and her friends Jane and Adam — played by Sasha Lane and Forrest Goodluck, respectively — contemplate the desires that got them shipped off to God’s Promise, where they are subjected to the mental horrors of what’s now known as conversion therapy.

Slated for an August release, The Miseducation of Cameron Post has already won big at Sundance, where it took home the Grand Jury Prize, and just played at the Tribeca Film Festival. The film captures the aching loneliness of being young, queer and confused — a story that’s still too rarely told. Sent away to a program in the woods, Cam and her friends are trapped in a literal and figurative wilderness.

There’s no physical abuse at God’s Promise, but Cam and her friends are told again and again by the staff — Reverend Rick (John Gallagher Jr.) and Dr. Lydia (Jennifer Ehle) — that homosexuality is not real, that they are struggling with sin, that their abnormal feelings are caused by too much affection or not enough affection or playing too many sports.

The day-to-day of the program, and Cam’s powerlessness in the face of the adults trying to convince her that she is broken and wrong, represent the real-life oppression of conversion therapy programs aimed at LGBTQ youth — which are now illegal in several states. But God’s Promise and its pupils are all an invention of author Emily Danforth, who wrote the 2012 novel of the same name on which the new film is based.

Unlike the film, Danforth’s novel spans years, not months, following Cam from her parents’ death in a car crash through her secret romantic relationship with her close friend, Coley, and then to conversion therapy. The film version of The Miseducation of Cameron Post was adapted for the screen by Desiree Akhavan, an out queer woman, who co-wrote the screenplay and directed the film. In a phone interview on Friday, Danforth spoke about seeing her debut novel turned into a film, her brief cameo in the movie and what she hopes happened to her characters after the novel ends.

Mic: When you were first approached about a film adaption of The Miseducation of Cameron Post did you have any reservations? Or were you on board right away?

Emily Danforth: I had very few, because I was already a fan of Desiree Akhavan’s work. Actually, the very first time we even had a casual conversation about it, and it was really casual, was back when she was working on The Slope, so even before her first film. We met, and it was a very casual, “Maybe someday.” I loved The Slope, my wife got me hooked on The Slope, and I really loved Appropriate Behavior [Akhavan’s debut film, from 2014].

So because it was Desi, and I knew her, and knew her sensibilities, and knew how well she knew the book, it wasn’t just like, “This is a sensational topic and I think I could make a movie out of it,” but that she had been a fan of the book. I don’t think I had the reservations that some other novelists have.

Did you have any conversations or input with Desiree and Cecilia [Frugiuele, who co-wrote the screenplay] while they were adapting the novel?

ED: I did, yeah. I think I’m officially credited as a consultant or something like that. We had many conversations. I saw several early drafts and gave lots of notes, and we had some Skype sessions back and forth. I saw many early versions and it was interesting to be part of the process. They did take some of my notes, and obviously disregarded others, but early on, before Beachside [the film production company] was attached, we talked quite a bit about how the script was coming together.

I should say, from the jump, from our first formal conversation, I knew that [Akhavan] was really only going to look at the conversion therapy section, that that was going to be the focus of the film, it’s going to focus on the final third of the book. So I was aware of that going in.

What was it like for you the first time you saw a version of the film? Was it emotional for you? Did it feel true to the vision you had in your head?

ED: It was really emotional. I had been on set a little bit, and so again, I think that [for] everybody that’s had their book adapted I suppose the process is different. But because I’d seen some versions of the script, and because I’d been on set — in fact, my wife and I are so briefly in the rock concert scene, we’re standing right behind the Helen character [another teen enrolled in God’s Promise].

But yeah, it was really emotional. I watched a cut of it that was a little bit different than the one that’s out now, alone on my laptop. That was the first way I watched it, just totally alone. And then again that night with my wife. And I really loved it but I didn’t trust myself. I was like, “Maybe you love it because you’re just so happy.” And then she completely loved it so I was able to trust myself.

But it was very emotional just to see how the characters were brought to life. I thought it was funny and I thought it was touching. I’ve sort of been a fan from the jump, which, I don’t know, sounds egotistical or something. But I really think they made a beautiful movie.

No, I get it. It’s sort of like the movie is your grandchild.

ED: Yeah, it’s related to the thing that I made but not, really. It’s a totally different way of telling the story — there are a lot of really significant changes. I’m a huge fan of queer film anyway, Cam is a queer film aficionado, for various reasons, in the book, just to try to find versions of herself that she thinks she can be. So just to have this awesome teen queer movie made out of the book, it still feels really unreal — in the best way.

You’ve said in other interviews that you were inspired by the story of Zach Stark, a teen whose social media posts about being forced into a conversion therapy program became a national news story. And you did a little research into these programs while you were writing. But after the book came out, did you hear from more survivors of conversion therapy?

I did not, myself, go to conversion therapy, but I did grow up Christian and then for a few years in high school sort of considered myself an Evangelical in rural Montana. So I was in the youth group, I was in the prayer group and I was queer. I was a closeted queer kid. So I did spend a lot of time thinking about how hopefully God would help me rid this thing from myself. So there are definitely autobiographical elements [in the novel], but I’ve always been really careful to say I did not go to conversion therapy. I think that’s important to make clear.

ED: I hope she made it, you know? I think the ending has a certain level of openness and ambiguity but there’s a real hope there, a real hopefulness. But I think she has a lot of things stacked against her. [Cam and her friends are] together and they’ve made this choice, and they’ve found each other, which is an experience so many queer people have. They’ve found this queer family, and they’re doing this thing together but they’re essentially homeless. They’re homeless queer teens in the early ‘90s. So I think there are a lot of things stacked against her but I think that she’s made it.

I saw on Twitter that you’re working on a new novel, what can you tell me about it?

ED: I am, it’s a ghost story. It has a significant historical storyline that takes place at a turn-of-the-20th-century boarding school in Rhode Island. And it’s also about the making of a somewhat controversial queer teen movie but I swear to god I was working on this before [the film version of The Miseducation of Cameron Post]. But it’s part contemporary and then it’s got this whole historical storyline. I haven’t done my elevator pitch yet, so I should probably work on one.