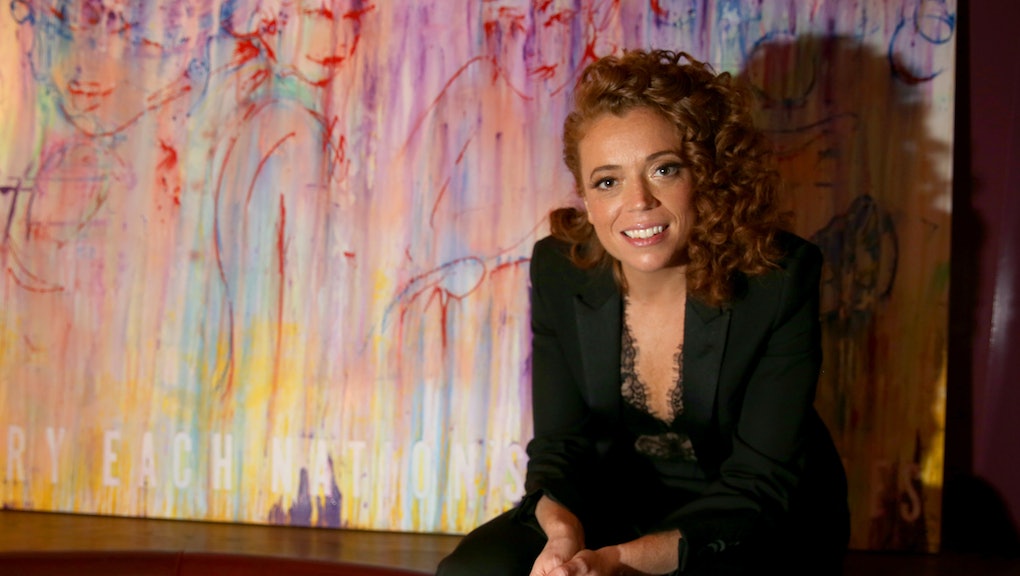 On Monday, President Donald Trump jumped into the contentious debate over Michelle Wolf’s White House correspondents’ dinner routine by tweeting that it is time to “put the dinner to rest.”

Trump has not been shy about expressing his distaste for the event, even before Wolf’s digs at White House press secretary Sarah Huckabee Sanders caused an uproar in Washington.

This year, Trump made an early decision not to attend the dinner, opting instead to hold a campaign-style rally in Michigan. And many have suggested that it was Seth Meyers’ and former President Barack Obama’s digs at Trump during the 2011 dinner that inspired Trump to run for office in the first place.

Yet, in calling for an end to the dinner, Trump has unwittingly aligned himself with some of the same harding-hitting investigative journalists who have dogged his presidency since day one. That’s because, long before Wolf’s controversial performance, many journalists had begun to feel that the correspondents’ dinner, also known as the “nerd prom,” has come to represent everything that’s wrong with political journalism in Washington. The uproar over Wolf’s roast on Saturday seems to be proving them right.

The correspondents’ dinner was originally intended as an event to promote freedom of the press and raise awareness about the crucial work done by a core group of Washington journalists tasked with holding the most powerful people in society to account.

Over the years, the dinner has evolved into something else entirely: an event that represents the polar opposite of these journalistic values, as Washington reporters come together to mingle and party with the subjects of their journalism and the sources they use to write about these powerful officials. Instead of just a dinner, the event has grown into a weeklong festival of parties and afterparties, with everyone vying for invites to the most exclusive events where they can rub shoulders with the powerful in Washington.

This kind of fraternization between politicians and the press is often frowned upon by media watchdogs, who believe it’s important that good journalists keep a professional distance from their sources or subjects to maintain objectivity.

Many journalists have discussed how unseemly the whole thing is for years.

“If you’re a reporter, you shouldn’t be taking selfies with the defense secretary,” former Politico reporter Patrick Gavin told the Wrap back in 2015. “It’s not as if reporters and politicians have to turn the other way in the hallway when they see each other, but a lot of reporting is about earning your readers’ trust, and if I was a reader and saw a selfie of a reporter and a politician, it would kind of make it seem like they’re all on the same team and that the reporting is a facade.”

If the chummy relationships between journalist and source were a problem at previous correspondents’ dinners, today it’s looking like a full-blown crisis for the fourth estate. In an era where the Trump administration routinely lies to the press without fear of consequence, getting too close to a White House source poses a real danger.

Yet this year, instead of simply cavorting with White House sources, many members of the Washington press corps have gone out of their way to defend members of the Trump administration from the jabs of the event’s annual comic speech. During her routine, Wolf poked fun at Sanders’ well-documented mendacity by saying, “I actually really like Sarah. I think she’s really resourceful. She burns facts, and then she uses that ash to create a perfect smokey eye.”

That joke prompted a sharp reaction from the New York Times’ Maggie Haberman, who tweeted, “That @PressSec sat and absorbed intense criticism of her physical appearance, her job performance, and so forth, instead of walking out, on national television, was impressive.”

Meanwhile, CNN’s Chris Cillizza called Wolf’s treatment of Sanders “bullying,” saying he was “stunned that Sanders sat five feet away from Wolf and just took it.” Even Bloomberg reporter Margaret Talev, president of the correspondent’s association, which invited Wolf to the event, condemned the comedian by saying some of the jokes “did not embody the spirit of the night” and that she “appreciated Sarah Sanders for joining us at the head table and her grace through the program.”

Though many reacted as though Wolf’s joke about Sanders had crossed a never-before-breached line, history shows comedians at the event routinely mock the appearances of political figures in ways that have gone beyond Wolf’s pseudo compliment.

In 2016, comedian Larry Wilmore mocked Obama’s graying hair by saying, “You look terrible, Mr. President. Your hair is so white it tried to punch me at a Trump rally.”

Obama once used the typically more anodyne presidential comedy response at the event to mock then-House Speaker John Boehner’s tan, by saying their shared frustration with House conservatives meant that, “orange really is the new black.”

The deference shown to Sanders and past figures left some with the impression that the Washington press corps was using the event to try and curry favor with the press-skeptical administration.

There’s so much concern about the way the news is oriented toward Trump in particular because he is attacking the press and pushing the idea that these arbiters of truth can no longer be able to function in that role,” said Angelo Carusone, president of the liberal watchdog group Media Matters for America. “Part of what they were doing is inoculating themselves against the criticism that they’re biased against Trump.”

Some journalists from outside the D.C. beltway echoed his concern.

“The Michelle Wolf WHCD performance allows the media to finger-wag about decency, look Very Fair to the WH, grease some [T]rump orbit sources in the process, and complain about the dinner like every year (while also attending),” wrote Buzzfeed’s Steven Perlberg in a tweet. “It’s perfect!”

New York University journalism professor Jay Rosen suggested that the display of “insider-ism” was reason enough to cancel the event all together. Even the appearance of journalists making friends with the powerful in order to get a scoop or two in the future is enough to raise questions about whether the dinner does more harm than good for the profession it celebrates.