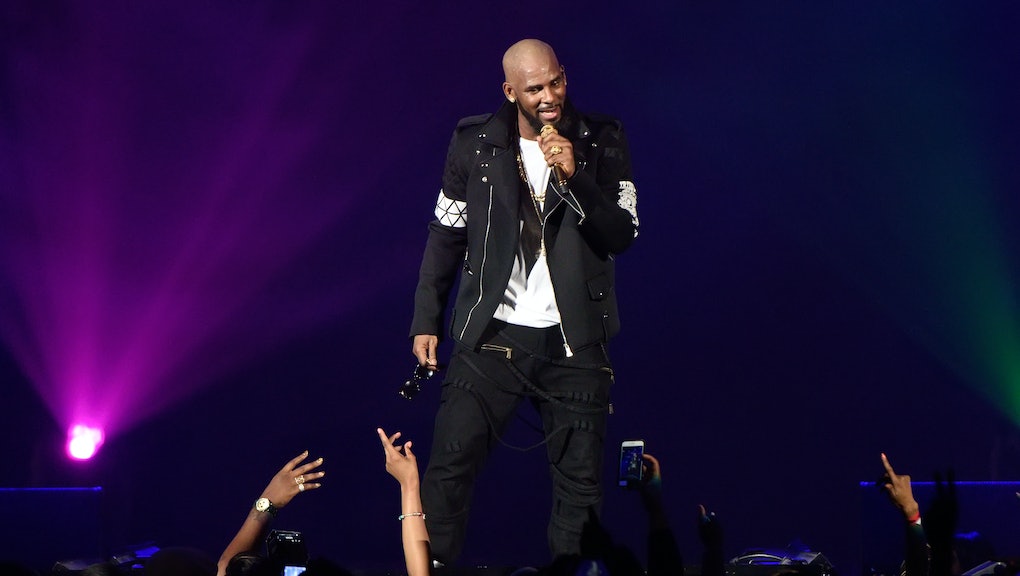 A campaign calling for an end to economic support for R. Kelly, the R&B singer accused of sexually assaulting and molesting multiple black girls and women over several decades, got a major boost on Monday.

The Women of Color of Time’s Up — a coalition of activists, filmmakers and actresses, including Shonda Rhimes and Ava DuVernay — joined the fight to #MuteRKelly by tweeting their official support.

“Together, we call on corporations and venues with ties to R. Kelly to join us and insist on safety and dignity for women of all kinds,” their statement read.

“I’m really excited to be working with them,” Kenyette Barnes, #MuteRKelly’s co-creator and national organizer, said. “I anticipate this is the beginning of further collaboration looking at the impact of sexual violence among black girls, especially as it relates to men in power.”

“And it’s not just R. Kelly [facing years of abuse allegations],” Barnes continued. “It’s the clergy. It’s community leaders. So I’m excited to talk about having that opportunity with Times Up going forth.”

“Since America was born, black men and women have been lynched for having sex or for being accused of it,” the statement read. “We will vigorously resist this attempted public lynching of a black man who has made extraordinary contributions to our culture.”

#MuteRKelly — arguably the first large-scale movement to end Kelly’s career and secure justice for his alleged victims — is the result of two decades of those alleged victims speaking out, paired with the advocacy work of campaign co-creators Barnes and Oronike Odeleye, the Black Women’s Defense League in Dallas, the SASHA Center in Detroit and Black Women’s Blueprint in Brooklyn, New York, who led protests outside of Kelly’s concerts in their cities.

In July, Odeleye and Barnes launched the campaign in Atlanta by calling on local radio stations to remove the singer from their rotations. They also led protests in August to shut down a concert at the nearby Wolf Creek Amphitheater.

“When we say mute we mean mute,” Odeleye said in a phone interview.

Organizers have also sought to dismantle Kelly’s economic power, in lieu of any indication that criminal charges will be filed soon.

“It is his money, even more so than his fame, that has insulated him from consequences,” Odeleye said. “It is because of his money that he is able to continue to hire these high-priced lawyers, continue to travel the world and perform and live his life as if nothing has happened.”

Since launching in the summer of 2017, local #MuteRKelly chapters have launched in Detroit, Chicago and Greensboro, North Carolina, according to Odeleye.

Since #MuteRKelly gained steam, at least two of Kelly’s shows have been canceled although it is unclear whether this was the direct result of the campaign. On Aug. 25, the FedExForum Center Memphis, announced Kelly’s tour stop there was canceled “due to unforeseen circumstances.” The most recent removal of the singer from a bill came Friday, when Ticketmaster announced he’d been cut from the 2018 Love Jam concert at the University of Chicago Pavilion. Ticketmaster did not give an explanation, according to the Chicago Tribune.

A petition calling for the University of Illinois at Chicago Chancellor Michael Amiridis to cancel Kelly’s performance received 1,300 signatures, the newspaper also writes. The letter was posted on the UIC Women’s Leadership and Resource Center Facebook page on April 25. Natalie Bennett, director of the resource center, drafted the petition with UIC faculty, and Scheherazade Tillet, the executive director of A Long Walk Home Inc., a non-profit in Chicago working to end violence against women and girls. The chancellor’s office did not comment on the cancellation, the Chicago Tribune reports.

Kelly is currently scheduled to perform at the Greensboro Coliseum in North Carolina on May 11. Barnes says if that concert isn’t canceled, local organizers will protest near the venue.

“They’re actually planning to approach the coliseum directly and the general manager ... to demand the concert be canceled,” Barnes explained. “The second part is we are organizing a march, rally and protest on the day of the concert near the venue [and] putting pressure on the community to not buy the ticket.”

#MuteRKelly organizers are doubling down on their efforts by pushing for popular streaming services to remove Kelly’s music, and asking users of these platforms not to play it.

“We have some conversations going on right now with services that I am not able to name,” Odeleye said. “They are putting policies in place to get artists removed for questionable moral behavior. We are putting him up as the first example, so we’re saying let’s start with him.”

Kelly’s inner circle is also getting smaller. On April 20, Pitchfork reported his spokesperson, Trevian Kutti, was no longer working with him. On April 19, BBC3 reported that entertainment attorney Linda Mensch and Kelly’s executive assistant, Diana Copeland, had also cut ties with the singer. Mensch said her departure was “unrelated to Mr. Kelly’s social life,” according to the report. Copeland and Kutti did not explain their resignations.

Before Time’s Up joined the cause, #MeToo founder Tarana Burke had expressed her support for #MuteRKelly, according to Barnes. On Wednesday, Burke convinced Tom Joyner, a nationally syndicated talk show host, to stop playing Kelly’s music.

Burke also called out Wendy Williams for dismissing the hashtag during the “Hot Topics” segment of her show on Jan. 25.

“It has nothing to do with #MeToo,” Williams said during the broadcast. “R. Kelly is just a very, very sick man.”

“I heard what Wendy said yesterday and was disgusted by it,” she wrote. “This is why Black women/girls are hesitant about coming forward with their #metoo stories bc of Black women like @WendyWilliams who blame the victim. You really think a 13 y.o. girl is to BLAME for sex w/ a 30+ y.o. man??”

Odeleye said the movement has received pushback from some in the general public, who have spread hearsay and misinformation about the allegations facing the singer. To combat this, organizers launched the #MuteRKelly website to connect with concerned citizens via a mailing list, and to educate the public on Kelly’s accusations and how to get involved with the campaign.

Barnes added that the site shows the full picture of the activists behind the #MuteRKelly movement, including black men allies based in Atlanta who have stood by them from the beginning.

Some of the allies Barnes named included NAACP Atlanta chapter vice president and attorney Gerald Griggs, who provided them with legal advice; Atlanta-based pastor Derrick Rice, who attended their first protest and advocates for sexual assault survivors in Atlanta; and former Fulton County Commission chairman John Eaves, who was among the first elected officials to support #MuteRKelly by calling for the cancellation of Kelly’s Altanta concert in a letter.

“We also need male allies to hold accountable their brother [and] to say these are not just a bunch of women who are just shouting,” Barnes continued.

Ultimately, as a former fan of the singer, Barnes said she understands why it may be hard for some listeners to let the singer’s music go. But she insists that the long list of sexual assault accusations against Kelly must be taken seriously.