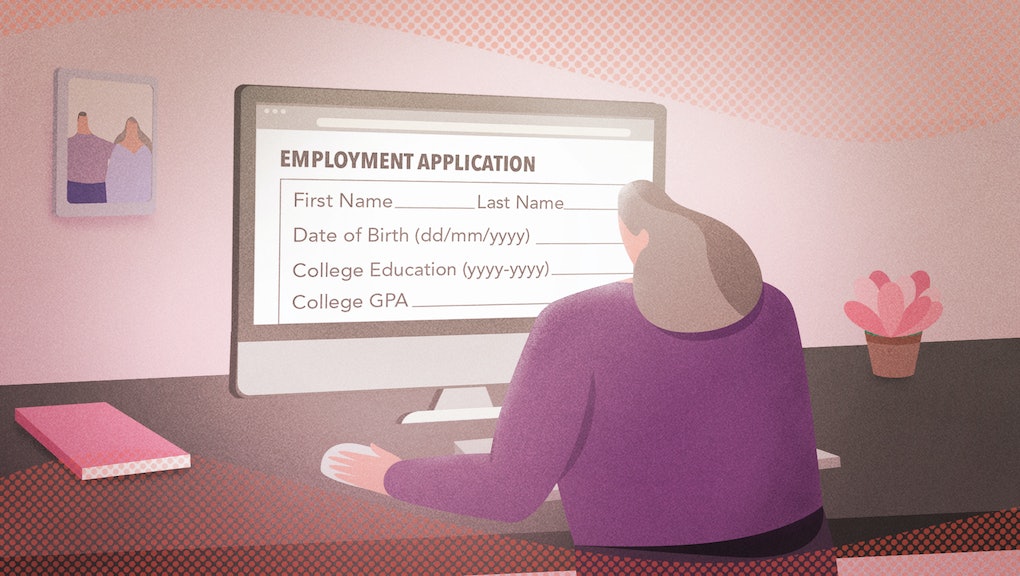 There’s a lot of canonical career advice out there. Better to overdress than underdress, for example. Try to beat your boss to the office. Scrub your resume and cover letters of typos and unnecessary jargon. Always make a counter-offer. And make sure the hiring manager can’t guess your age.

Marisa Vila had just left a job of 10 years when she started hearing the last tip from recruiters, peers and the career counselors at the state unemployment office. At 34, Vila was the youngest person ever to head her division at the Boston nonprofit where she worked. Now 44, she found that she was coming across as “too experienced.”

“I spoke to a friend who’s a recruiter and she said... ‘I looked at your LinkedIn, and I immediately clocked how old you are. That’s not going to help you, that’s going to hurt you’” said Vila, whose last name has been changed to allow her to speak freely. “Especially in marketing and communications, after the age of 35 they think you’re not going to know how to do social media.”

Vila’s experience is not remotely uncommon. People’s salaries tend to increase as they gain experience in the field, according to data from the New York Federal Reserve. But then they stop getting raises, and salaries actually start declining once workers reach their fifties. At some point, the free market simply stops seeing value in experience and starts seeing it as sign that someone is expensive. Vila said she was replaced at the Boston nonprofit by two people making about half what she makes.

There are many reasons why age discrimination is a problem, ranging from the ethical to the economic. There’s no reason to assume that a young person is more tech-savvy than an older person, for example. The latest research actually suggests that the opposite is true, and that people of all generations approach using technology in more or less the same way.

So why are we still so quick to assume that younger hires are any more or less likely to be up to date on the latest Slack plug-ins or are the only people capable of composing a viral tweet? And why should young people care about a career headwind that feels like it’s decades away?

There are a few theories about why ageism appears to be getting worse. In the 1920s, the so-called “engineer’s half-life” — the amount of time it took for half of a given worker’s skills to become obsolete — was around 35 years, as the New Yorker recently noted. Now, it’s around five years. There are also simply lots more older people than there used to be: Between 2012 and 2050, the population above the age of 65 is expected to almost double, according to the Census.

The often outwardly ageist technology sector may also be playing a role. Back in 2007, even the youth-obsessed Silicon Valley community raised an eyebrow when Facebook founder and CEO Mark Zuckerberg said at a tech conference that young people were “just smarter,” as CNET reported at the time. All five of the largest U.S. companies — in terms of market capitalization — are technology companies, three of them founded in Silicon Valley.

Not only are the biggest companies increasingly focused on technology, but the skills they’re looking for aren’t as useful for as long. These two facts, along with a premium on youth, might be reasons why companies seek out younger employees. And yet at the same time, studies also show that age diverse teams tend to be more productive, resilient to turnover, and better at approaching complex decisions as a group, according to a brief from the Society of Human Resources Management.

“If a company wants the best team for the job, the most effective teams are age diverse, especially when it comes to creative stuff,” said Ashton Applewhite, an anti-ageism activist. “The people who need to learn stuff in order to run their farm, or run their business or run their life, learn it — no matter how old they are.”

Diverse companies tend to produce more innovative products, according to another recent paper from Portland State University. They also tend to foster a more inclusive, positive corporate culture that encourages employees to stick around. That’s only partially because turnover costs are huge: the Society for Human Resource Management estimates the cost of losing a single nurse at nearly $41,000.

But the biggest problem with pushing older workers out of the labor force? The consequences will be far worse when it happens to younger generations who can expect to work longer. It’s one thing to have your earnings peak at 50 if you can plan on retiring by the time your 65. But the class of 2018 isn’t expected to be able to retire until they’re 72, according to recent projections from NerdWallet. And that’s with “careful budgeting.”

Why ageism is so ingrained

There are several ingrained stereotypes that help ageism feel more acceptable to hiring managers, said Kerry Hannon, a career counselor and author of Getting the Job You Want After 50 For Dummies.

“They don’t have the stamina. They aren’t up to speed with technology, they’re set in their ways and not be open to other ideas. Or that they’ll be resentful of a younger boss. And that they’re too expensive,” Hannon said. “On many levels, I think everyone is guilty of this, even if it’s subconscious.”

Hannon tells her clients and the people she works with to strip their age from their resumes, and only include the most recent 10 to 15 years of jobs.

“You hear people say things on the basis of age that they would never get away with with analogous remarks about other groups,” Applewhite said. “You’d never say you’re too fat to get that job. And yet you’re too old or too young would go unremarked upon.”

There are other reasons why age discrimination is a little easier to get away with besides common stereotypes about older workers. The 1967 Age Discrimination in Employment Act includes exceptions for jobs that require certain amounts of stamina or agility, for one.

Even if fired employees can prove age was one of the reasons they were let go, they have to be able to prove it was the sole reason for their termination, thanks to a 2009 Supreme Court ruling. As a result of the high legal bar and fear of reprisal or simply looking like a pot stirrer in the eyes of future employers, many victims of age discrimination don’t even try, Hannon said.

“It’s a hassle and future employers will see it,” Hannon said. “They’re worried that it’ll reflect on you down the road and that’s why a lot of people don’t do it.”

Better funding for the Equal Employment Opportunity Council — which helps bring ageism suits to court — is also important to holding companies accountable, Applewhite said. Despite ageism’s reputation as being more common in technology, it’s present in all industries, from corporate behemoths trying to push out middle-managers to restaurant companies hoping to hire “young and fresh” servers.

How to making hiring less ageist

Fully eradicating ageism may not be possible, as the New Yorker’s Tad Friend noted. Ageism is not particularly new or unique to Western industrial capitalism, and there are many cultural anthropologists who have suggested the enduring appeal of pushing older workers out might have something to do with our desire to create an illusion that we’ll never grow old and die ourselves.

And yet simply being more aware of ageism may help us resist the urge to attribute lawmakers’ understanding of social media to their age, or to blame the prevalence of fake news on confused grandparents.

The enduring appeal of pushing older workers out might have something to do with our desire to create an illusion that we’ll never grow old and die ourselves.

Activists like Applewhite think all job applications should be age-blind, pointing to a famous experiment of gender imbalances in prestigious orchestras that essentially started to disappear when they began having musicians audition behind a curtain. In addition to halting practices like age-based targeted advertising, hirers should also consider moving from job interviews toward more skills-based assessments which can be conducted anonymously.

Advertising can also play a role, as the magazine Allure pointed out when the publication announced it would stop using the term “anti-aging.” Third-party advertisers like Facebook, for example, still enable companies to effectively target people of certain ages for job ads. If we want companies to stop making decisions based on age, we will want to look closely at the way they communicate with the public.

Like advertising, job descriptions, too, can be rife with coded language. The term “digital native,” for example, can deter applicants as young as their mid-30s, as the Society for Human Resource Management pointed out. Stressing a culture fit, free dinners and happy hours (implying you don’t have a family to take care of), or trendy buzzwords like “ninja’ and “guru” can also deter older applicants.

Behavioral economics and technology also have a role to play, said Jon Stross, a co-founder and president of the recruiting software company Greenhouse, which recently rolled out a new product for clients hoping to make their companies more inclusive (Editor’s note: Mic uses Greenhouse for hiring).

Companies can use Greenhouse Inclusion to hide certain information their recruiters see — like a CEO referral or where someone went to school. The features take a cue from Nobel Prize-winning economist Richard Thaler, injecting little “nudges” throughout the hiring process that remind the person who’s using it to actively seek out diverse applications.”

“Bias seeps in everywhere,” Stross explained. “So even saying, ‘we’re just making it a skills test,’ there are still so many other interactions throughout the process.”

In the meanwhile, what’s a job seeker to do? “A lot of times, as people move up the chain they don’t want to rock the boat and be noticed,” Hannon said. “Really stay out there.”

Hannon pointed out that for young applicants and old, finding a job is still a lot about who you know, not just what you know how to do. The more experience you have, the bigger network you have to draw on in your hunt.