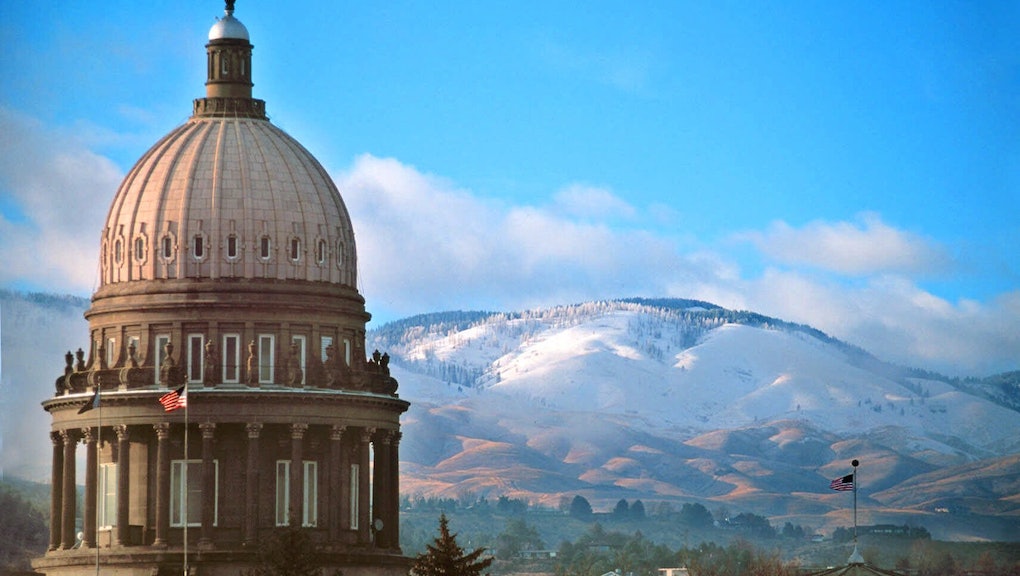 As the 2018 midterm elections approach, and speculation about a potential blue wave continues to mount, three conservative states have been set up to become test cases on voter mobilization around progressive issues in deeply Republican territory.

Ahead of the November elections, Utah, Idaho and Nebraska are all in the process of trying to add Medicaid expansion to their respective ballots. Two of them are now on the cusp of success.

In Idaho, activists are on the verge of overcoming the state’s onerous ballot measure approval process to get Medicaid added onto the ballot. Organizers with the pro-Medicaid expansion group Reclaim Idaho have spent the past several months traversing the vast western state in a green RV with the words “Medicaid for Idaho” painted on the side. On their trek, they’re collecting signatures to meet the state laws requiring 6% of registered voters from 18 of the state’s 35 legislative districts to sign, in addition to collecting 56,192 signatures statewide.

On Tuesday, the organizers turned in their signatures. They said they’re confident that they had met both the statewide and district thresholds. Luke Mayville, Reclaim Idaho’s co-founder, called the moment historic.

“We feel ecstatic, and I think I speak for volunteers and leaders all over the state.” he said in an interview. “Everywhere we went, we met volunteers who told us some variety of the same story, which was that their lives were really changed by participating in this. For some of them, it was the first major involvement in democracy in their lives beyond voting.”

Meanwhile, in Utah, activists have submitted more than 165,000 signatures from registered voters to add Medicaid expansion to the ballot — easily surpassing the 113,000 signatures required. That drive has already prompted the state’s Republican governor, Gary Herbert, to sign into law a more moderate version of Medicaid expansion in March, which will require approval from the Trump administration. In the meantime, activists are pushing ahead with their ballot initiative for full expansion.

In Nebraska, organizers are still collecting signatures to try and reach their 85,000 voter threshold ahead of their July 6 deadline.

Medicaid expanding is a key issue for progressives. A win in these states would clock a major victory for them in the ongoing fight for full implementation of the Affordable Care Act’s Medicaid expansion since the law’s passage in 2010.

Though the ACA initially intended to expand coverage nationwide, a 2012 Supreme Court decision held that states had the right to opt out of expanding Medicaid. Initially, most Republican-controlled states opted out of the program. But over time, political vulnerability and intense pressure from advocates led a number of Republican governors to reverse course and expand Medicaid.

Now, most of the states that still haven’t expanded are those where Republicans have total control of state government and very little risk of losing power.

At least that’s how it seemed before the election of Donald Trump brought about a massive upswing in progressive mobilization within red states. Now the Medicaid expansion battle is key for Democrats trying to rebuild their party in those deeply conservative territories.

So far, of the 33 states that have expanded Medicaid, the only U.S. state that has done so via ballot initiative was in November in Maine — a moderate state that tends to elect a mix of Democrats, Republicans and independents to statewide office. After the vote, the state’s Republican Gov. Paul LePage blocked the decision and the ultimate outcome is still pending int the courts Evidence suggests that Maine’s 2017 Medicaid expansion ballot question significantly boosted turnout.

Data provided in February to Mic by the progressive analytics group Data for Progress suggests that Americans have a net favorable view of Medicaid expansion in every state except Wyoming.

Such a focus on health care may be even more important when trying to appeal to voters in conservative states, specifically.

A January Kaiser Family Foundation poll found that voters nationwide rank health care as their top priority ahead of the 2018 midterm elections, followed by the economy and immigration. However, that same poll found that when focusing in on the all important “swing districts” across the country where Democrats hope to reclaim their majority in November, health care ranks much lower behind the economy, the situation with North Korea and immigration.

This could, in part, reflect the fact that many of those swing districts are concentrated in states like New Jersey and California, where Medicaid has already been expanded, and state-level health care policy is more robust. The difference between the national polling and the swing district polling suggests that voters in less competitive electoral territory are still prioritizing health care coverage in a way that other parts of the country are not.

If that’s the case, putting Medicaid on the ballot could go a long way in shifting the fundamentals of who turns out to vote in those states, and what Democrats’ chances of victory look like. And Democrats in these states are counting on it.

“In red states, we are all building on a foundation in order for us to eventually start winning state-wide races again,” Jane Kleeb, the chair of the Nebraska Democratic Party and a board member with the national progressive group Our Revolution said in an interview. “When our progressive allies ran a ballot campaign to raise minimum wage [in 2014], a lot of Democrats won, and ran on that issue, and talked about it on the campaign trails.

Kleeb believes the key for Democratic politicians trying to win over voters in red states is to de-emphasize their party allegiance and focus their campaigns entirely on issues that can help improve voters’ day to day lives.

“A lot of our rural communities rely on Medicaid and Medicare in order to keep their rural hospitals open,” she said. “This is just one of those really strong winning issues for us as Democrats.”

Organizers behind the ballot initiatives echoed this, and added that they could change the entire election this year.

“Our Medicaid expansion campaign could draw a clear line in this election and make health care the number one issue in such a way that candidates will really have to articulate whether they want to take health care away, or expand health care for people,” said Mayville. “And there won’t be a way to dodge that issue.”

In Idaho, that sort of polarization is already taking effect among candidates running for statewide office.

Rep. Raúl Labrador (R-Idaho), the leading Republican candidate for governor in his state, has signaled that he may be open to trying to overturn the Medicaid expansion if voters approve the measure in November. He came under fire for his position on health care one year ago when he told constituents at a town hall that “nobody dies from lack of access to health care.”

Now his likely Democratic opponent is using his position to make the 2018 election a choice between expanding health care coverage or allowing people to continue to slip through the cracks.

Paulette Jordan, the leading Democratic candidate for governor in the state, said that she believes Labrador’s position is indefensible.

“62,000 Idahoans need health care,” she said in an interview. “And thanks to an incredible grassroots effort by Reclaim Idaho, the people of Idaho will get to make this decision at the ballot box. Labrador would be a disastrous decision for the state of Idaho, and his threat to overturn the will of the people will leave the most vulnerable Idahoans at risk.”

Labrador’s campaign did not give an immediate response when asked for comment.

As the midterms get closer, it’s becoming clear that putting Medicaid on the ballot in red states such as Idaho may help sway the outcome of governors races, or other down ballot races. And it could become a model for states across the country.

There are currently 17 states that have not expanded Medicaid (not including Maine), and most of them are controlled by Republicans. Putting Medicaid on the ballot in all of the remaining states in future elections could fundamentally change the political landscape for progressives across the country, while also expanding health care access to tens of thousands of people.