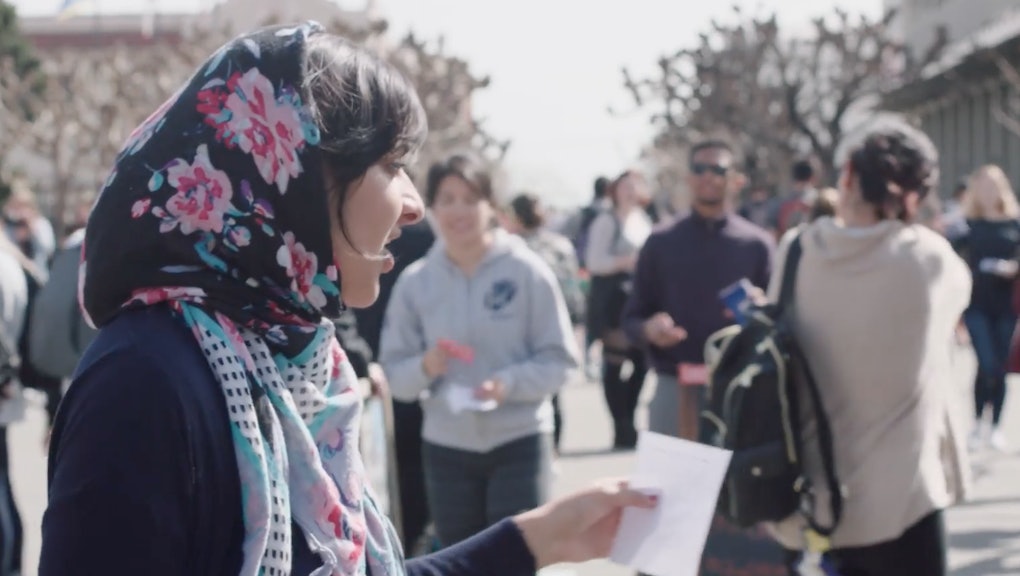 Over 10,000 California students are demanding free tuition — and it’s working

When Sadia Khan was in 10th grade, she made a promise to her terminally ill father that, no matter the cost, she’d attend the University of California, Berkeley. The daughter of Pakistani immigrants, Khan comes from what she describes as a “very low-income background,” with her father working long shifts as a farm laborer to provide for the family. But as his health declined, she said, her father became concerned that he hadn’t been able to secure the one thing he wanted most for his children: their education.

“He felt bad that we wouldn’t be able to go to the best schools because we were too poor,” Khan said. “So part of it was keeping my promise to my dad that regardless of ‘being too poor for higher education,’ I would make it happen.”

In the years that followed, there would be no shortage of obstacles for Khan. In August 2013, her father died from his illness during her first semester at San Bernardino Valley College, a community college in California. A year later, Khan was raped and became pregnant, forcing her to take time off from school so that she could give birth to her son in April of 2015. But in the spring of 2017, at long last, she was accepted to Berkeley as a third-year transfer student and, excited to make good on her promise, prepared to switch schools. It was during those first few weeks at Berkeley, Khan said, when she was newly arrived and wide-eyed, that she experienced the most jarring transition into what was supposed to be the most exciting phase of her life.

A holdup with her Free Application for Federal Student Aid left Khan, a single parent, homeless and struggling to afford food. For the first two weeks of the semester, she made ends meet by sleeping on the floor of her friend’s eight-person, off-campus house and schlepping to the food bank on campus for her meals. Overwhelmed by the stress of her financial insecurity, Khan says she began to struggle with absorbing information during her classes until, finally, she took out a $6,000 personal loan and felt relief wash over her for the first time all semester.

“I remember the first class I went to after that and I was genuinely happy because I realized that I actually enjoyed that class,” she said. “I was kind of sad that all the previous classes I had attended, I didn’t learn anything, and yet this was such an interesting topic that I could have been learning this entire time had I not been dealing with all these outside financial issues.”

Khan’s experience is far from an anomaly. Since the beginning of the Great Recession in 2008, state education spending on public colleges and universities has plunged to historic lows, creating a crisis for students who qualify — but cannot afford — to go to college.

From 1980 to 2014, California cut state cut funding to the tune of 54% per University of California student and 41% per California State University student, and in-state tuition costs have nearly tripled for students in both systems since 1991. In a December report, the University of California’s Global Food Initiative found that 44% of undergraduate students had reported experiencing food insecurity, and 5% of both U.C. undergraduate and graduate student populations reported having experienced homelessness at some point during their enrollment.

To compensate, students are borrowing more and more money to attend school. Now, an estimated 44 million American borrowers have racked up more than $1.48 trillion in student loan debt.

It should come as no surprise that ballooning student debt disproportionately affects low- to moderate-income students; in a 2017 University of California Accountability Report, for example, approximately 75% of students within the lowest family income bracket of $55,000 a year or less were graduating with an average of nearly $20,000 in student debt — the highest percentage of borrowers in any income bracket.

It was in this thick stew of newly-prohibitive tuition costs, ballooning national debt and heightened anxiety for working-class students that Rise was born in California. A student-led advocacy group founded by 28-year-old Maxwell Lubin, Rise seeks to eliminate college tuition wholesale, protecting students from taking on debilitating debt and encouraging the state of California to invest in its public colleges and universities in the process.

While such proposals have rattled conservatives and even some center-leaning liberals, they’re not as novel as they sound. On the national level, prominent progressives like Bernie Sanders and Elizabeth Warren have begun touting the necessity of things like free college tuition and abolishing student debt. In 2017, New York Gov. Andrew Cuomo unveiled the Excelsior Scholarship program, which any New York resident from a family making less than $125,000 a year can use to attend public four-year colleges, universities and community colleges throughout the state tuition free. But while some states, including Tennessee, Rhode Island and Oregon (and, potentially, New Jersey) have followed New York’s lead and made community college free for all residents, the cost of college in California has risen by 300% in the past decade alone. And so, in September, with those tuition hikes looming, Lubin launched Rise in an effort to make California the next state on the list to offer students free tuition.

During his time as a former appointee at the U.S. Department of Education under the Obama administration, Lubin saw firsthand the strain placed on students “who were doing everything right, working hard in school, working sometimes two or three part-time jobs outside of school,” and who were still forced to turn down college because of affordability issues. After the Department of Education turned over to usher in the incoming Trump administration, Lubin began wondering what he could do to help amplify the voices of those hardest-hit students.

“I started asking why there weren’t student advocacy organizations, the way there are really strong advocacy organizations for other issues like the [American Civil Liberties Union] for civil rights and voting rights, or NextGen America for climate, or Planned Parenthood for reproductive health,” Lubin said. “There really is not anything comparable for college access and affordability.”

By Lubin’s estimate, more than 10,000 students across California are now directly involved in Rise’s advocacy efforts: signing petitions, phoning their legislators and traveling to Sacramento by bus to personally tell lawmakers their stories of financial anxiety in the hopes of staving off future tuition hikes.

And, according to Lubin, it’s working. In the fall, the group lobbied for and helped successfully pass Assembly Bill 19, a law that makes the first year of community college free in California and which will help an estimated 20,000 students go to college this year. And in January, the tuition increases slated for the Cal State and U.C. systems later in the year, due to insufficient state funding, were taken off the table after students showed up en masse to balk at the increased burden it would place on them. One of those students was Sadia Khan.

Along with 15 to 20 other Berkeley students — and Lubin — Khan rode a bus to the Sacramento Capitol building in March to attend a public hearing for the 2018-2019 education budget proposals. In her testimony, which she can be heard delivering in a shaky voice in a public video of the hearing, she runs through her experiences since arriving on campus: struggling to afford food and housing and taking out loans just to cover the expenses her financial aid would have been allocated to had it not been delayed. As she spoke, Khan said she noticed several members of the Assembly Budget Subcommittee on Education Finance distracted, texting and reading on their cellphones, and felt her heart sink.

“After I was done, some of my friends rushed over and hugged me, because some of the information I had talked about was extremely personal, and the fact that they were on their phones while that was being said — I remember I was just crying,” she said. “The fact is this means so little to a lot of them, even though it’s the difference between whether we stay in school or not, whether we can get an education.”

It’s the same type of political apathy that Lubin says made him want to organize Rise in the first place.

“This isn’t an issue about partisanship and it isn’t about party,” he said. “It’s about leadership, and it’s about state lawmakers and state leaders doing the right thing for students instead of special interest groups and lobbyists and unions.”

In the final weeks of the spring semester, Khan said that her financial aid money finally came through — nearly $20,000, “basically a full ride” — granting her an immense and immediate amount of relief. After books, housing, tuition and meals, however, she estimates she’ll still need to borrow about $2,000 a semester to make ends meet — and with four semesters left, plus the $6,000 she borrowed this semester, she estimates that she’ll graduate with around $14,000 in outstanding loans. But despite plans to graduate with debt, the idea of more school isn’t daunting to Khan; she joked that although she sometimes questions her own sanity, she is tentatively planning on pursuing a master’s degree in public policy and social work — and then using that degree to secure a career in higher education.

“What I always come back to is the fact that higher education is something that everybody should have the opportunity to obtain,” she said. “I’d love to do something where I can just make our education system better and more representative of the actual community within California.”