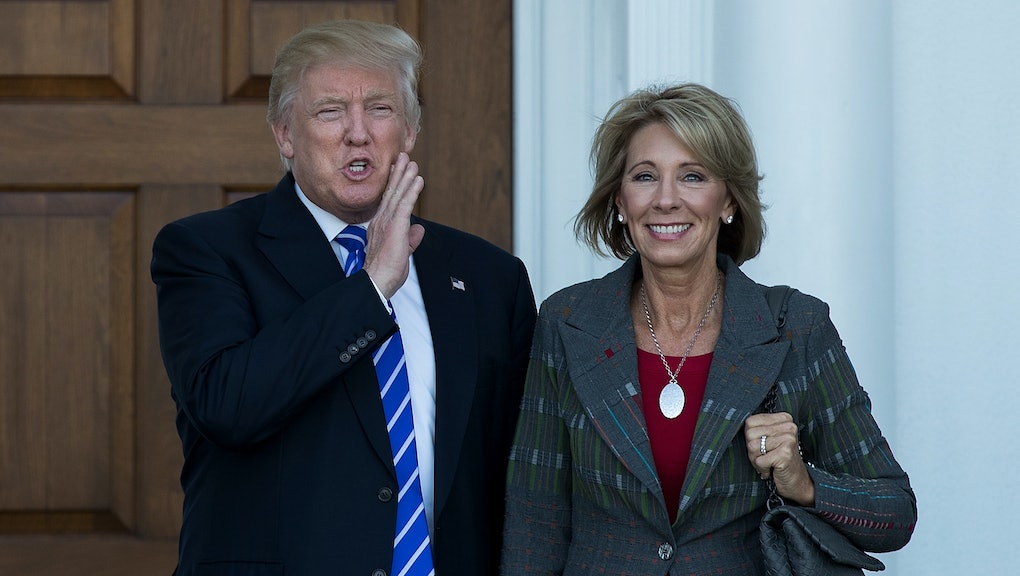 As Trump honors the nation’s teacher of the year, here’s what he’s done to gut public education

President Donald Trump delivered a speech Wednesday honoring national teacher of the year Mandy Manning of Spokane, Washington, amid simmering tensions between his administration and public educators across the country.

“Her incredible devotion has earned her the adoration and respect of students and colleagues throughout her school district, community and entire state” Trump said of Manning, 42, who once served as a member of the Peace Corps and who currently teaches English to newly arrived immigrant and refugee students. “The job of a teacher is not only to instruct the next generation of workers, but the next generation of citizens.”

Yet even as Trump took time to praise the nation’s teachers Wednesday, his White House has been notoriously unfriendly to public schools in the months since his inauguration, when he referred to them as “American carnage.”

Trump has been a cheerleader for “school choice” — a system that diverts federal dollars away from public schools toward private and charter schools — since his presidential campaign. Roughly 90% of U.S. students in pre-K through 12th grade attend public schools, however, and results on the success of charter schools are mixed.

The president has also repeatedly called for the elimination of the Department of Education — a move some Republicans have been advocating for since Ronald Reagan was president, but one that would wipe out the government arm that regulates inequality between wealthy and poor school districts and ensures schools aren’t violating civil rights laws.

In addition to his rhetoric, Trump has recommended slashing federal funding of the nation’s public schools. In his first education budget, released in May 2017, Trump proposed cutting $10.6 billion from federal education initiatives, such as after-school programs and public-service loan forgiveness.

He sought an additional $3 billion in cuts to the Education Department and called for $1.6 billion to “support private school vouchers and other school choice programs” in his 2019 budget, the Washington Post reported, but Congress rebuffed most of the proposed cutbacks.

Despite the transparency with which Trump has tried to gut public education funding, perhaps nothing has been a clearer signal of his administration’s adversarial relationship to public schools than the president’s appointment of billionaire Betsy DeVos as his education secretary. In addition to sharing Trump’s support for charter schools, DeVos has repeatedly drawn criticism over her apparent lack of basic knowledge about the American education system. In a 60 Minutes interview with Lesly Stahl in March, DeVos stumbled through questions about school choice and admitted she had not visited any underperforming public schools.

“We have a problem where public money is siphoned off from the public schools and given to children who are going to charter and private schools,” Hazell said.

In response, DeVos reportedly said she considers public schools and charter schools to be under the umbrella of the public school system — despite the fact that both types of schools are subject to different federal regulations and funding.

“I think a lot of us were grateful about having the opportunity to speak with the secretary and be in the presence of the Department of Education,” California teacher of the year Brian McDaniel told HuffPost. “However, I left with more questions than answers.”